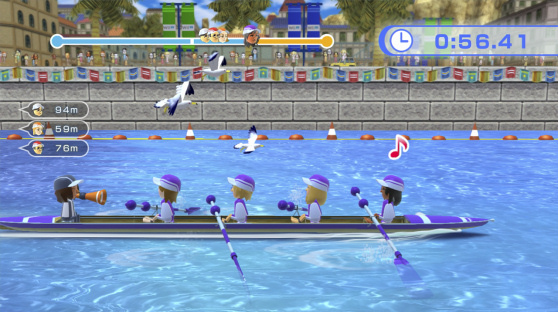 Above: Don’t let your teammates down. These guys mean business.

Park your butt on the Balance Board and start rowing back and forth with the Wiimote. This is one of my favorite exercises because A, I’m actually pretty good at it, and B, it gives me the illusion that I could have this awesome of upper-arm strength in real life. Rowing Crew works your abs surprisingly well, so you might be pretty sore by the time the race is over.

The Body Breakdown feature shows you which parts of the body you’ve been focusing on most — chests and arms, back, abs, glutes, and legs — so that if you’re slacking in other areas, you can select workouts to improve them. Adding exercise minutes to each type changes your overall rank: You could be a “Muscle Master” or “Abdominal Monster” in the making.

Wii Sports Club isn’t as intensive as Wii Fit U, so you probably won’t get much of a workout playing the tennis, bowling, or golf minigames (baseball and boxing will be available later). My favorite out of the three for tennis was Tennis Moles, where you whack the ball into a bunch of (you guessed it) moles and let it bounce around for points. The other minigames let you hit balls through different-colored rings or play against a robotic duck for distance points. 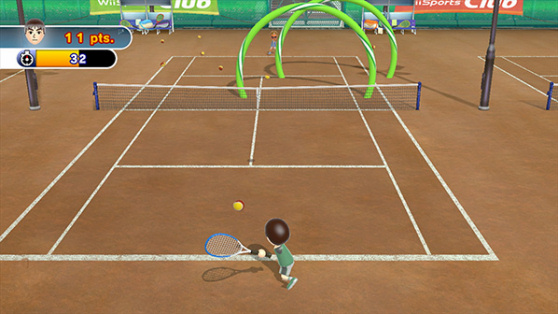 Above: Hit the ball through the rings for more points.

Tilt City is basically color-matching meets pinball. You hold the Wiimote horizontally to control the upper paddle and balance on either leg to tilt the two lower paddles left or right. You’ll need to do both methods simultaneously to guide the balls into the same-colored Mario-style pipes, which gets tougher as you have to manage more balls. Fireworks explode in the night sky with each point you score.

Balance Bubble is one of the prettiest parts of Wii Fit U — and there aren’t many. You guide your Mii, who’s floating helplessly in a bubble, down a colorful and cartoonish river by balancing and tilting as you float forward. It’s one of the tougher balance games — even harder than Perfect 10, where you shake your hips in one of four numbers to solve math equations. And I suck at mental math.

I wasn’t huge on the golf games — mostly because even my lightest swings were too hard or totally in the wrong direction. Pro Putter lets you aim for the cups while Chip-In Bingo challenges you to land the ball on huge scored bingo panels for extra points. I liked Driver Challenge the most. You have to hit the ball through goalposts and onto a giant circular target board out on the water. Think Super Monkey Ball, only you’re not playing as the ball and there aren’t any cute animals (you have Wii Fit U’s Bird’s-Eye Bull’s-Eye chicken minigame for that).

(Wii Fit U features a Driving Range game, in case you want more options to choose from.) 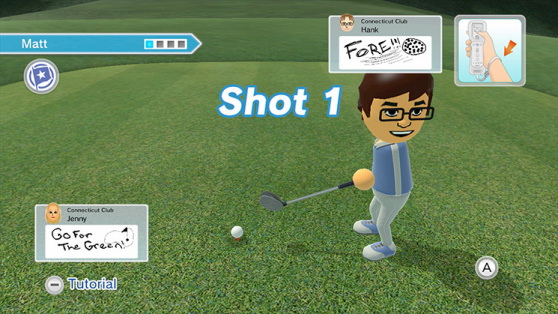 Above: Like other golf games, you have to take the wind into account. I’m not so great at that.

Rhythm Boxing and Free Boxing both consist of the same basic moves: punching and blocking (with both feet on the Balance Board and the Wiimote and Nunchuck in hand). They’re virtually the same, but Free Boxing is better if you just want to switch solely to the GamePad and mindlessly follow instructions as you watch some television. These two activities are great for working your arms in case you get tired of the exercises in yoga or strength training.

In Scuba Search, you dive into the ocean and explore its crystal-clear depths. You can snap screenshots with the R button and view those pictures later in your Album. Stepping in place — and turning in all 360 degrees — makes you swim forward and left or right as you hold up and peer through the GamePad. But you can also earn points by collecting treasure and discovering fish by swimming through them, and you get a bonus for returning to the boat before your oxygen runs out. Sure, you won’t burn many calories doing this, but it’s cool anyway.

I found bowling the most fun out of the three main Wii Sports Club activities. Spare Pickups and Tricky Pins have you knocking down any remaining pins, including those laid out in special patterns, but 100-Pin Pro is my favorite. You get a few tries to wipe out as many of the 100 pins as possible, so your initial approach to their giant arrangement can make all the difference. There’s a little room for creativity with this one. 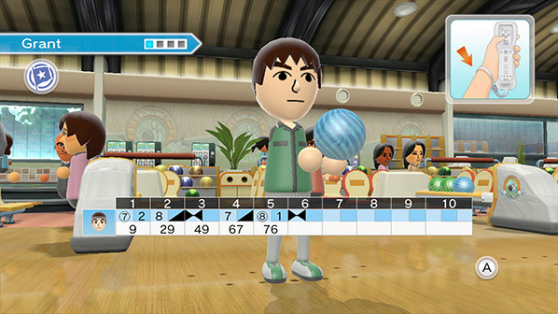 Above: You may be bowling, but skip the pizza and Coke.

Wii Fit U features asynchronous local multiplayer for 14 different games, and the personal leaderboards rank your performances so you can try to beat each other’s scores. Wii Sports Club, on the other hand, includes both local and online multiplayer. If you really hate exercising, you can always write both titles off as party games. Just try not to eat too much chips and dip.

It all adds up to this …

I’m nursing sore muscles as I write this, which is good proof that yes, you’ll get your money’s worth out of Wii Fit U if you actually use it. It’s an investment in more ways than one, though — the cost adds up fast considering you’ll need to buy the game, a Balance Board (unless you already have one), some Fit Meters if you want to count calories on the go, and a couple Plus accessories for dancing if you don’t own those, either. But Nintendo crammed in a lot of content, and Wii Sports Club is a nice (if relatively simple) side addition.

I don’t plan on stopping here. Wii Fit U has become a fun and rewarding way to break up my day and burn off calories and stress. It doesn’t take much of workout to get an energy boost that can last all day.

Wii Fit U won’t help you with one thing: your diet. It can’t make sure you eat right or drink water instead of soda, but it can make you more aware of how much those late-night snacks are sticking to your ribs. And, hey, I’m going to need the head-start while I can get it. The holidays may be over, but Easter is coming — and I see a whole lot of jellybeans in my future.