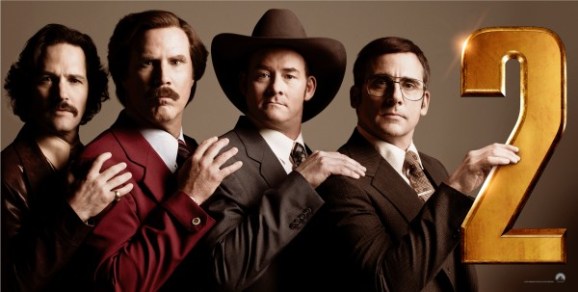 Who could have imagined that Anchorman 2 would ring in the end of film?

More than 100 years since it was founded, Paramount Pictures has reportedly moved to a completely digital solution for distributing its films to theaters, reports the LA Times.

While the studio hasn’t officially commented on the decision, theater industry sources divulged that The Wolf of Wall Street was Paramount’s first wide release film to be distributed digitally. And as if to make the situation more heartbreaking, the middling Anchorman 2 was reportedly the last Paramount film to be distributed on film.

Theater-goers likely won’t notice the shift much, but the move to all-digital film distribution is something cinephiles have been dreading for some time. While it’s significantly cheaper for studios to send movies to theaters digitally — a film print could cost up to $2,000, while a digital copy of a film on a hard drive is closer to $100 — film fans argue that digital projection lacks the warmth and quality of 35 millimeter film.

But the difference in quality between film and digital projection is quickly diminishing, which means it’s only a matter of time until every studio goes digital. With more than 1,000 theaters in the U.S. still without digital equipment (and the cost of new digital projectors around $70,000), the shift could end up killing off smaller theaters throughout the country.

As a movie fan (and someone who’s been reviewing films for years), I can’t help but tear up a little at this news. I appreciate many of the benefits from digital distribution — it will be much cheaper for studios to release movies to more theaters now, and digital copies also don’t deteriorate over time — but it still feels like we’re losing a bit of the magic that cinema was founded upon.