William Hertling is one of my favorite science fiction writers. If you are in the tech industry and haven’t read his books Avogadro Corp, A.I. Apocalypse, and The Last Firewall, I encourage you to go get them now on your Kindle and get after it. You’ll thank me later. In the mean time, following are William’s thoughts on the future of transportation for you to chew on this Sunday morning — Brad Feld

There’s always been a sweet spot in my heart for flying cars. I’m a child of the 1970s, who was routinely promised flying cars in the future, and wrote school essays about what life would be like in the year 2000. Flying cars are a trope of science fiction, always promised, but never delivered in real life. In fact, at first glance, they seem no closer to reality now than they did back then.

But maybe they’re not so far away. Let’s look at some trends in transportation. 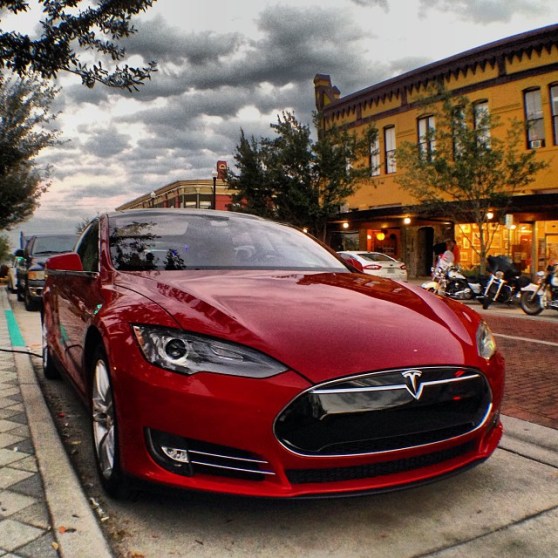 Above: A Tesla Model S.

Hybrids vehicles, with their combination of both gas and battery power, represent 3% of the cars on the road today, up from zero just ten years ago. Fully electric cars like the Nissan Leaf and Tesla are mere curiosities, representing only 0.1% of all cars purchased in the U.S.

It might seem like a slow start, but electric cars will soon form the majority of all vehicles. Here’s why:

Except for early adopters of technology and diehard environmental customers, most people aren’t buying a fuel type, they’re buying transportation. They may want speed or economical transportation or family-friendly minivans, but how the vehicle is powered isn’t their main concern.

Examples like the Tesla have shown that electric vehicles perform on par with gas-powered cars. What limits their adoption then? Two factors: cost and range (and charging infrastructure, to a lesser extent, but that will be remedied when there is more demand).

Ramez Naam, author of The Infinite Resource: The Power of Ideas on a Finite Planet, recently explained that lithium-ion batteries have a fifteen year history of exponential price reduction. Between 1991 and 2005, the capacity that could be bought with $100 went up by a factor of 11. The trend continues through to the present day.

This exponential reduction in battery cost and improvement in battery technology, more than anything else, will affect both the cost and range of electric cars. By 2025, that Nissan Leaf battery pack will cost less than $1,800, making the cost of the electric motor plus battery pack less than the price of a comparable gasoline motor. Assuming even modest increases in storage capacity, the electric vehicle will rank better on initial cost, range, performance, and ongoing maintenance and fuel costs.

With both lower cost and better performance, electric vehicles will likely overtake gasoline-powered ones by about 2025.

Even ten years ago, most of us couldn’t imagine a self-driving car. When the first DARPA Grand Challenge, a competition to build an autonomous car to complete a 150-mile route, was held in 2004, the concept seemed audacious and it was. Of the fifteen competitors, not a single one could complete the course. The farthest distance traveled was 7.3 miles.

The following year, twenty-two of twenty-three entrants in the 2005 Challenge surpassed the 7.3 mile record of the previous year, and five vehicles completed the entire course. Sebastian Thrun, director of the Stanford Artificial Intelligence Laboratory, led the Stanford University team to win the competition.

Sebastian Thrun went on to head Google’s autonomous car project, which first received press coverage in 2010 and continues to captivate our imagination. Yet despite Google’s technology proof point, and the development work now being done by many vehicle manufacturers, most people still imagine self-driving vehicles to be a long way off.

But Google has essentially shown that self-driving cars are already here: their vehicles have been accident-free for half a million miles whereas human drivers would have had an average of two accidents in the same miles driven.

The real barrier to adoption is cost. In 2010, the cost of Google’s self-driving technology was $150,000, of which $70,000 was just the lidar (a highly accurate laser-based radar). German supplier Ibeo, which manufactures vehicular lidar systems, claims it could mass-produce them as soon as next year for about $250 per vehicle. Computational processing is likely another large component of the overall price, and it has a long history of exponential cost reduction.

If costs come down, are there other barriers?

Some concerns in the media include:

However, these oppositions aren’t unbreakable laws of physics. They are resistance to change, and they are subject to the forces advocating for autonomous vehicles, such as:

Simply put, the money is with the forces for autonomous vehicles. Insurance companies, liquor companies, vehicle manufacturers, customers, and governments will all want the benefits of self-driving cars.

There’s been talk about halfway solutions: semi-autonomous vehicles that are hands off but require an attentive driver, or need a human to handle certain situations. It’s both cheaper and easier to build an assistive solution than to have full autonomy, which is why we’re starting to see them show up in luxury cars like the Mercedes S-class, which has a driver assistance package (just $7,300 over the starting $92,900 price!) that can help maintain your lane position, distance from drivers ahead of you, and avoid blind-spot accidents.

But the driver is still in control and responsible.

In some ways, this semi-autonomy may be the worst of all worlds. It could encourage drivers to pay less attention to the road even though the vehicle isn’t really up to the task of taking control. As it stands, drivers don’t get much practice with emergency situations. So when emergencies do occur, our reflexes are slow or wrong. How much worse would the average emergency response handling be if drivers got even less practice, and were only called into action when they were either not ready or in a situation so bad that the AI couldn’t handle it? Under these circumstances, it’s unlikely that a human driver would respond in a correct, timely manner. If even airlines pilots fall asleep when the autopilot is on, how likely is it that regular drivers will be attentive?

So when will it happen?

One rule of thumb I learned upon entering the technology industry was that it takes seven years, on average, for new technology to go from laboratory proofs to sellable product. I’m not sure where that rule comes from, but by that measure, we should see the first self driving cars on sale in 2017.

From a cost perspective, we’ve already seen that lidar is likely to drop from $70,000 to $250. We don’t know the breakdown of Google’s other costs, but it could decrease by a factor of ten in ten years (pure computing technology falls faster – about 50x in ten years, more mechanical things slower). That would drop the total price under $10,000 by 2020, a reasonable luxury car option.

By 2030, another ten years out, the price will fall under $1,000, at which point the autonomous option will cost probably less than the annual savings in insurance.

In sum, we already see some limited assistive capabilities now, and should see partial self-driving capabilities around 2017, available as expensive options, with full autonomous capability around 2020, still at a significant cost. By 2030 or slightly earlier, all vehicles should be fully autonomous.

Now we get to the long-promised but not-yet-realized flying car.

The barrier to flying cars is not in the design or building of a viable airframe. We’ve built small flying vehicles for a while now. A quick Google search shows their amusing variety. We have manned quadcopters, hover bikes, and lots of flying car-like things.

No, the real problem is that piloting is hard. Less than one third of one percent of Americans are pilots. A pilot’s license costs $5,000 to $10,000 and requires months or years of time and study. (Even if a pilot could fly a car in an urban environment, it’s not likely to be an enjoyable experience: think about the difference between a drive on a two-lane country road versus commuting in an urban grid. One is pleasure and the other utility.)

So it’s really the piloting barrier we need to overcome to see flying cars.

That will happen when autopilots, not humans, have achieved the necessary level of sophistication. Companies like Chris Anderson’s 3D Robotics have built, along with the open source community, the ArduPilot, a sub-$500 autopilot for unmanned drones. The ready availability of these consumer-grade autopilots suggests that navigation in open air by software is no more challenging (and may be less so) than navigating ground-level streets.

There will be substantial legislative barriers and not as many forces pushing for flying cars, but we should see at least see concept vehicles, prototypes, and recreational models (possibly outside the U.S.) in the late 2020s, just following the mass-market production of fully autonomous cars.

What about cost? An entry-level plane like the Cessna Skycatcher is a mere $149,000, a price point that’s lower than that of forty currently available automobile models. While entry-level helicopters are twice as expensive as comparable fixed-wing aircraft, quadcopters significantly simplify the design and add fault tolerance at a lower cost than single-rotor copters.

If the legislative barriers can be overcome, flying cars might not be as common a sight as a Ford or Toyota, but they could be more common than a Lamborghini or Aston Martin.

I love the train ride between Portland and Seattle, and I’ve taken it dozens of times, including just riding up and back in a single day. Trains are relaxing and roomy, and their inherent energy efficiency appeals to my inner environmentalist.

On the other hand, they also have shortcomings. They’re locked into a track that is sometimes blocked by other trains, leading to unpredictable arrival times, and they go according to timetables that aren’t always convenient.

Elon Musk’s hyperloop may reduce new infrastructure cost, boost speeds, and reduce the timetable problem while maintaining energy efficiency, but I think the hyperloop is a stop-gap measure. That’s because we’ll soon reach an era of cheap electricity.

Photovoltaic cost per watt continues to drop (from $12 per watt in 1998 to $5 per watt in 2013, 14% annually over the long term) at the same time that we’re seeing new innovations in grid-scale energy storage. Ray Kurzweil and others predict that we’ll meet 100% of electrical needs with solar power by 2028. So while efficiency of passenger miles traveled is a key element to sustainable transportation right now, it may be less important in the future, when we have abundant and inexpensive green power.

Green power reduces the energy efficiency advantage of trains and the hyperloop. Of course, the other major benefit of mass transit is freeing the passenger from the tedium of driving, but self-driving vehicles accomplish that just as well.

Transportation will look very different by 2030. We’re likely to have many autonomous, personal-use vehicles. Since car sharing services are even more useful when the cars drive themselves to you, we may have much less personal ownership of the vehicles. Airline travel is likely to change as well, as self-piloting fast personal vehicles will compete for shorter trips, while the reduction in fuel costs may change the value structure for airlines.

And yes, we’ll finally have our flying cars.

William Hertling is the author of Avogadro Corp, A.I. Apocalypse, and The Last Firewall, science fiction novels exploring the role of artificial intelligence and social networks in the near future. Follow him on twitter at @hertling, or visit his blog at www.williamhertling.com to learn more about his writing.