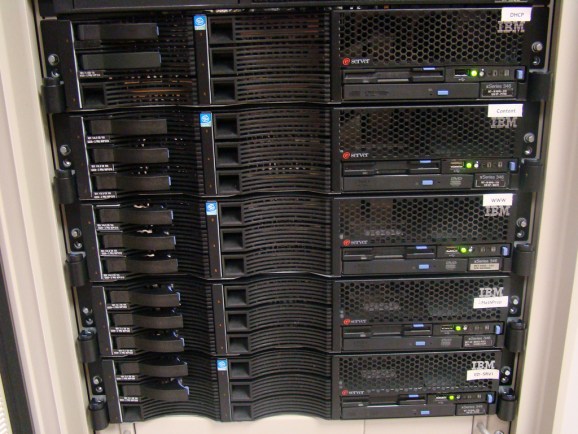 Well, well, IBM is trying to get rid of its low-end server business again, the Wall Street Journal reported yesterday. It’s a good move for IBM to move out of that territory — and it could give a buyer some nice opportunities for growth.

Dell is apparently considering buying the low-end part of IBM’s server business, the Journal reports. Meanwhile Bloomberg reports today that Lenovo is engaged in talks with Big Blue along the same lines.

The reports didn’t name specific product lines, but presumably the products in play include System x line of servers, whose computer chips can handle with the widely popular x86 instruction set.

Lenovo was reportedly considering the deal less than a year ago. Talks collapsed over the selling price, but after that some analysts still thought the deal would eventually go through. Now it looks like the believers could be proven right.

IBM, for its part, sees considerable prospects in cloud computing, and rightfully so. Businesses are spending more and more on public cloud resources. And IBM is splurging to win many public cloud deals by offering geographically distributed cloud infrastructure that can meet companies’ regulatory mandates.

But while IBM can play in that hotly contested market, the drive to the cloud has simultaneously hurt IBM’s abilities to sell basic hardware. Companies small and large are increasingly ditching or consolidating their IT equipment and turning to the cloud, which helps big cloud providers such as Amazon Web Services buy custom-made servers at great scale. To do that, the cloud providers turn to little-known custom-server makers, such as Quanta and Wistron, instead of getting a deal and more service from a big-name server seller like IBM or Dell.

Those companies and others produce generic x86 servers, creating standardization for customers but making profit margins slim. So it would be reasonable for IBM to stop selling products that aren’t substantially different from what competitors have.

It would probably be better for IBM to work in areas where profit margins are higher — like software. Indeed, generally speaking, software has been more profitable for IBM as of late. In the third quarter of 2013, IBM’s systems and technology business unit, which includes servers and storage, had a gross margin of 33.6 percent, down from 37.3 percent for the same period in 2012, according to IBM’s latest earnings statement. Software gross margins came in at 88 percent, which was flat year over year. It goes without saying that the software gross margin beats the one for systems and technology.

It would seem perplexing, then, that companies want to sell IBM’s x86 servers, as demand isn’t off the charts.

But both Dell and Lenovo have good reasons to be interested. Dell has been announcing partnerships with companies like Red Hat that could help it sell more hardware.

Lenovo is seeking to diversify and protect itself from the decline in PC shipments, Bloomberg pointed out, and servers conceivably would be a step in that direction. But generally big legacy IT companies such as IBM, Dell, and Oracle are seeing their server sales decline.

So why would it be a good idea for Lenovo, Dell, or any other company to pick up what IBM wants to drop? Because it could yield some nice benefits that aren’t immediately obvious. Technology analyst Jack Gold wrote up a few ideas in an email to VentureBeat:

First, market consolidation — Lenovo and Dell both want to increase market share for several reasons: new customers, bigger scale, selling add-on services. Next, IBM doesn’t generate a whole lot of margin on low end systems, and needs to concentrate on new business opportunities like Smarter Planet, Big Data, Mobile, Watson, etc. Lenovo or Dell can probably increase that margin due to their efficiencies. So the additional business could be attractive. Third, IBM’s base of customers are oriented towards large enterprises, where both Lenovo and Dell want to expand.

Give those perspectives some thought, and suddenly IBM’s x86 server line looks desirable — just not for IBM.