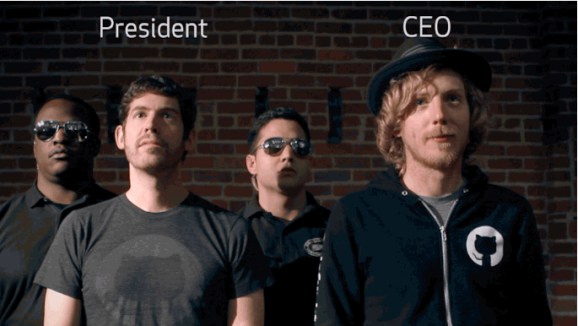 GitHub has a new CEO in town. Sort of.

Their roles will also change a bit. Wanstrath will be doing CEO stuff — leading the company, being the boss-in-chief of a large and growing team, aligning strategies with objectives, and whatever.

Preston-Werner, as president, will focus on R&D and “new growth opportunities.” Think of him as the Sergei Brin to Wanstrath’s Larry Page.

Chris and I have stepped into these roles over the past few months, and today we’re simply acknowledging the change publicly. While we don’t use titles heavily at GitHub, we think in this case they’re useful to communicate areas of responsibility both internally and externally.

Preston-Werner will also remain GitHub’s primary spokesperson, a role for which he is remarkably well suited.

GitHub has taken $100 million in a single round of funding to date. It currently hosts 10 million code repositories and is the single best-loved developer tool on the web, as determined by a survey of hundreds of developers.