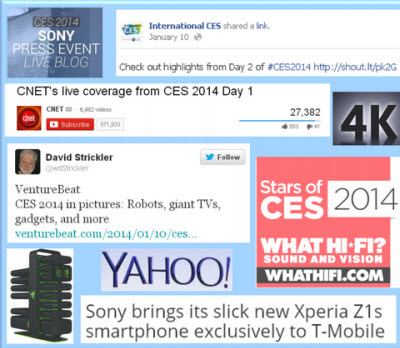 Above: Samples of popular CES coverage.

Samsung was king of the 2014 International CES.

The South Korean electronics company came out on top as the No. 1 attention-getter at the huge tech trade show earlier this month, according to analysis by media group Gorkana Group.

The results show the net result of all of the press conferences, CES marketing, exhibits, and other efforts to be heard at the loudest and biggest U.S. tech trade show.

Other winners at the show were Engadget, the official show website; Yahoo CEO Marissa Mayer, who had the most popular keynote speech; Twitter, which was the top social media service at the event; smartphones, the top gadget mentioned in the press; and trends including wearable technology, 4K UltraHD displays, and the Internet of Things.

Gorkana calculated the numbers by analyzing all of the metrics associated with CES in social media.

Under Gorkana’s tally, Samsung came out No. 1 in terms of social media mentions, with a volume of 88,981. That was the same rank Samsung had last year. Google was No. 2, at 48,046, thanks in part to the inclusion of Android mentions. A year ago, Google was No. 4. 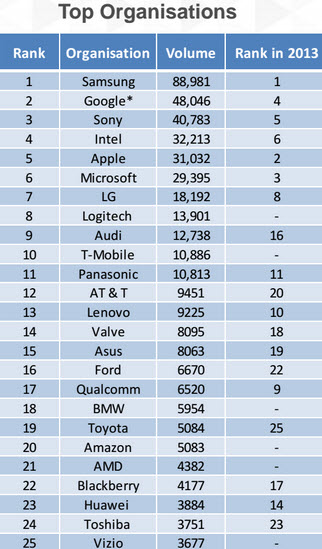 Apple, which made no major announcements during the show and traditionally does not exhibit at CES, still came in at No. 5, with 31,032 mentions. (Apple accessories, including the iPhone stun gun by Yellow Jacket, were a huge part of the show). Apple was No. 2 last year.

Some items caught the attention of TV celebrities. Late-night talk show host Jimmy Fallon discussed a voice-controlled smart bed that becomes firmer based on voice commands. T-Mobile CEO John Legere boosted his company into the top 10 with a publicity stunt: He crashed the CES event of rival AT&T and got booted by security. Toyota scored big with a sedan powered by a hydrogen fuel cell, and Lenovo’s ThinkPad X1 Carbon ultrabook got a lot of buzz.

Blockbuster movie director Michael Bay received a lot of unwanted attention when he walked out on Samsung’s press conference after a teleprompter failed to deliver his lines.

Jan. 9 was the peak of the buzz around CES. Twitter accounted for about 83 percent of the social media sharing, enabling it to become the de facto resource for information about the show. The official hashtag #ces2014 trended strongly. Logitech’s strategy of giving away hourly prizes for retweets and product reviews resulted in #logitechlive topping the brand hashtag charts.

News sites held about 6 percent of the direct share of traffic, with places such as Google News, Engadget, CNET, Mashable, and TechCrunch registering as influential.

Among smartphones, Sony’s Xperia Z1 dominated the mentions. For hardware, Nvidia was at the top with mentions of its Tegra K1 mobile processor. Among TVs, Samsung’s curved 4K UltraHD TVs came out on top. And among car makers, Ford, Audi, BMW, and Toyota received a lot of attention for their visions of connected cards.

For laptops and tablets, Samsung’s Galaxy Pro series was the most popular. And in gaming, the Oculus Rift Crystal Cove demo received the most mentions. 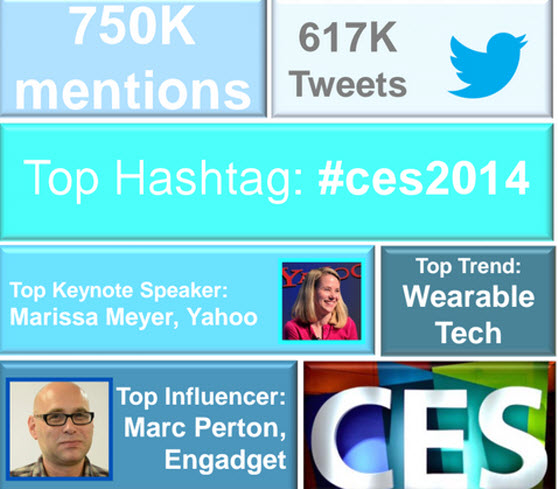 Above: Gorkana measured the top attention-getters at CES.