Chartio, for instance, is one beneficiary of the new burst of interest around data visualization. Today the cloud-based visualization software provider announced it had raised $2.2 million in new funding from previous investor Avalon Ventures, bringing its total funding to date to $6.6 million.

The San Francisco startup has added features around being able to “blend” data from multiple sources for analysis and visualization, and letting multiple Chartio users collaborate. Enhanced sharing capabilities are also on the way.

“It’s about finding the best balance between simplicity and power,” Chartio’s founder and chief executive, Dave Fowler, told VentureBeat in an interview. “There’s a bit of a macho, machismo thing going around — ‘I want to buy the BI [business intelligence] product that has the most buttons … to have the most functionality and power.’ And we’re fighting those instincts.”

Making data visualization a breeze has long been a focus for Chartio. It started in 2010 after Fowler saw startups in Y Combinator struggle to make useful dashboards for tracking metrics.

With the new money, Chartio appears to be in a better position to grow itself into a bigger name in the visualization business. Ancestry.com, Indiegogo, and Change.org are among Chartio’s hundreds of customers, but the data visualization is far larger than that.

And several other data-visualization and business analytics startups have been tacking on new funding rounds in recent months, including BIME Analytics, Birst, DataHero, and Datameer. 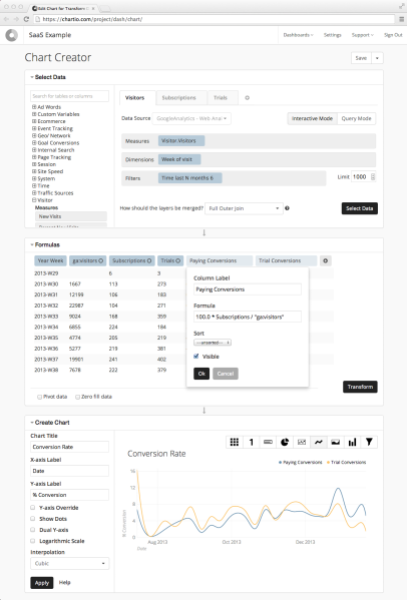 An interesting development for Chartio is a new services package that allows customers to get help when they use Chartio — or simply farm out the use of the tool to Chartio experts. “We are very much focused on being a self-service company and we’re trying to build a self-service business,” Fowler said, although “we found a lot of them say, ‘OK, this is really easy to use, but I don’t have the time or expertise to know how to chart or what to chart or what other people in my space chart.”‘ And that’s why a services division makes sense.

The thing to watch for is how Chartio tries to keep being both simple and powerful. It’s a hard balance to strike, Fowler said, but that’s what he wants to do.