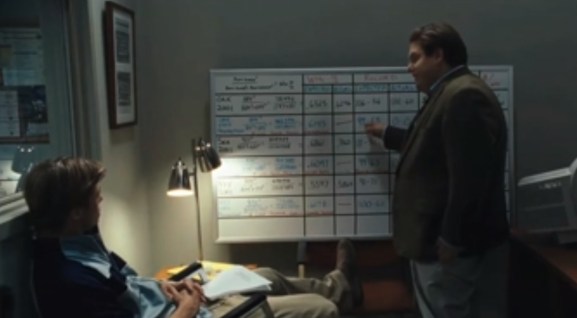 Dino Vendetti a VC at Bay Partners, moved to Bend, Oregon, on a mission to engineer Bend into a regional technology cluster. Over the years, Dino and I brainstormed about how Lean entrepreneurship would affect regional development.

I visited Bend last year and caught up with his progress.

Today with every city, state, and country trying to build out a technology cluster, following Dino’s progress can provide others with a roadmap of what’s worked and what has not. Dino’s three-part story on Bend covers:

Tech investing is risky. Success depends on finding startups that have identified acute customer pains in large markets where conditions are ripe for a new entrant. Few entrepreneurs find this scalable and repeatable business model because it’s not easy. However, four critical advances over the past decade (cloud, accelerators, Lean, and Angels) not only changed the math for tech investing but made regional tech clusters possible.

These four developments, while important to Silicon Valley, are vital to developing regional tech clusters. While the density of Silicon Valley startups can’t be replicated in regions, the barriers of money and resources have disappeared. These changes make entrepreneurship possible anywhere.

While the technology gap is closing, what’s still missing in local regions is early stage capital.

Large regionally based early stage funds have mostly failed. They failed due to:
1. The dearth of deals in the region that have IPO potential and
2. Most of those funds were also raised and invested prior to the huge capital efficient wave of the past 6-8 years. These regional funds invested in capital-intensive startups that required large initial investments. The result was too much money in too few deals. The inevitable failures then damaged returns.

The Oregon startup scene today looks very different from what it did 10 years ago. Today it’s dominated by capital efficient software, web, and mobile startups, whereas 10 years ago it was dominated by semiconductor and hardware startups that consumed huge amounts of capital before their first dollar in revenue.

So a regional fund must do three things:
1. Focus on early stage investments
2. “Right sized” for the exit environment. If it’s too big you won’t be able to intelligently deploy capital. Too small and you won’t be able to follow on and protect your investments or make enough investments to ensure you have enough “at bats.”
3. Find and focus on the entrepreneurs and deals that want to build scalable startups.

We believe that regional funds need to walk a delicate balance. But it doesn’t take huge IPOs to return multiples of capital on a small fund.

A typical VC fund in Silicon Valley might raise $200 -$400 million.  And over a 10-year life of a fund only one out of five deals will deliver all the returns. A good return to your investors is 20% per year. That means over 10 years, investors expect ~6x return on their investment. This means that those winning deals have to make a ~30x return to provide the venture capital to fund that 20% compound return (the 6x).

The Valley strategy is to get as much money as possible to work in the high flying deals that are going to pop. It’s an educated/calculated swing-for-the-fences model, and it can work and be extremely lucrative if you can consistently get in those deals.

The problem for a regionally based investor is that there will be a limited number of startups in your region that have a realistic chance at an IPO. The percentage of VC backed startups that go public is very small, so counting on those exits in a regional fund would not be prudent (nice if it happens, but don’t build the model to rely on it).

The reality is that the super vast majority of liquidity events are M&A, and the majority of those are in the under $100M range. As a result, large multi-hundred million-dollar funds focused on early stage investing in the region can be challenging. There just aren’t enough “right” regional startups to invest in.

Bend playing Moneyball makes a lot of sense. In fact, it’s the only game that investors in a regional cluster can play.  Regional investors need a way of improving their odds of getting base hits and minimizing strikeouts.

Playing Moneyball in venture capital means making smaller, smarter bets focused on companies and deals that the big teams, the Silicon Valley heavyweight investors, pass up because the deals are too far from Silicon Valley, not yet known to them, not in their comfort zone, or not the fad of the month.

Playing Moneyball also means playing with the money you have. The reality for a regional investor is that you have to match the capital you raise to the deal/exit environment you are in.

Specifically this means that a regional fund should be $10-30 million. (With a portfolio of at least 20 investments, or you are at risk of the adverse selection problem.) And the fund should be looking at startups that can provide $20M to $100M exits – almost certainly as M&A deals.

The chart below diagrams our regional fund strategy. 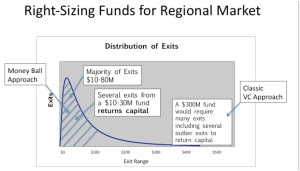 The good news for regional investors is that these factors allow you to play Moneyball if (and that’s a big IF) you are investing in entrepreneurs who are living and breathing evidence-based entrepreneurship and who are building scalable startups. This is true whether the company is concept stage or ramping revenue. I’ve found a lot of companies in the region that have found a way to get to some level of revenue traction but haven’t broken out. When you dig in, the reasons are usually easily discoverable and observable.

One of the fundamental benefits of being so active in building the FoundersPad accelerator (a 12-week, Lean Startup program focused on customer development) is working with the cohort participants on refining their business models. This experience has provided me with a whole new set of pattern matching filters as an investor.

The business model canvas and the customer development process give investors an incredible opportunity to evaluate how deeply an entrepreneur has engaged with their target customers and, more importantly, what they have learned about the problem-solution space they are going after. This learning and the measurements and metrics that surround it is what evidence-based entrepreneurship is all about and what makes it a powerful tool for entrepreneurs, investors, and accelerators.

If you are a regional accelerator or investor and would like to talk and compare notes, please feel free to email me.