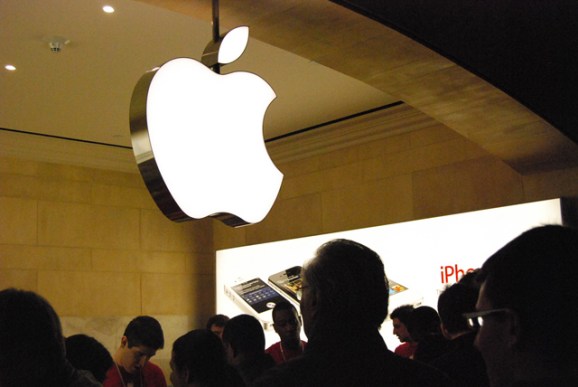 Once again, the holidays have been kind to Apple.

Apple reported $13.1 billion in profit on revenues of $57.6 billion — the same profit as it saw last year, but slightly higher than that quarter’s $54.5 billion in revenue.

For this quarter, which covered the 2013 holiday season, analysts have been paying particular attention to iPad sales. Last year, Apple saw its iPad sales fall for three consecutive quarters as competing Android tablets gained steam. This time around, with the new Retina iPad Mini and ultralight iPad Air, analysts expected iPad sales of around 24.8 million, according to a compilation of predictions by Fortune’s Philip Elmer-Dewitt.

Last quarter was also the first time Apple had two new iPhone models for the holidays. Analysts expected Apple to sell around 54.8 million iPhones during the quarter — 3.8 million more than what Apple ended up reporting.

Apple’s stock is already taking a beating based on the news: It closed at $551.19, but it’s already down around 5.2 percent in after-hours trading. Expect an even bigger decline after Apple’s earnings call later today.

Ultimately, it seems that Apple’s inability to keep up with iPhone 5S demand kept sales below what analysts expected. In an interview with the Wall Street Journal, Apple chief financial officer Peter Oppenheimer noted that the iPhone 5S “sold better than we expected, but we were not able to come into a supply-demand balance until the end of the quarter.”

As we’ve seen over the past few quarters, Apple’s iPod line definitely seems to suffering thanks to the iPhone and iPad. Apple sold 6 million iPods during the quarter, compared to 12.6 million last year. Mac sales, on the other hand, seem to be doing a bit better at 4.8 million, compared to 4 million units last year.