Electronic Arts’ The Sims Studio is one of the bright lights of the game business when it comes to diversity. But just a fifth of its employees are women. That tells you how far the industry has to go when it comes to gender balance. 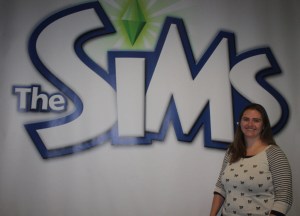 There are women in positions of leadership like Lyndsay Pearson, the lead producer of The Sims 4 at Electronic Arts’ The Sims studio, and Lucy Bradshaw, head of EA’s Maxis label. But they’re still something of a rarity.

Part one of our interview with Pearson focused on breaking into the games business as a woman, designing games with female characters, and why the issue has become a hot button lately. The second part focuses on creating a studio with diversity. EA’s The Sims Studio is a big team in Redwood City, Calif., and about a fifth of its members are women.

Here’s an edited transcript of part two of our interview with Pearson.

GamesBeat: What are some things that you think help, as a manager, when you’re looking after the studio? We had a panel of women in development at our GamesBeat conference. They were talking about making games for “devices that fit in your pocket,” noting that a lot of women don’t carry devices that fit in a pocket because they don’t have pockets. Talking in that way implicitly indicates that you’re thinking about making games for men. It was subtle thing to point out, but they hear things like it on a daily basis.

Pearson: Yeah, it’s a valid point. I find that, having grown up in the Sims studio, it’s been helpful for me to have found a lot of women as mentors. I’ve been able to talk to them about everything from career development to the day-to-day of, “How do I get this thing done?” Now that I’m a lead on the team, I try to make sure I provide that same sort of mentoring for the other people on my team, the other women on my team.

We have conversations about how to find your confidence and speak up about what you worry about, just like I have with any of my producers. Women get the same treatment as men on the team that way, for the same reasons. But it’s helpful to have conversations with them about work/life balance, for example. I recently had a baby, and I talked a lot with my manager about that, because it was very frightening to think about how I would manage a schedule and the amount of overtime here that I’ve traditionally worked. It’s helpful to have women I look up to who’ve done that before and be able to talk to them about that.

EA is a great support for that, actually, and my studio has been a great support. A lot of my managers have kids. We all understand. It’s very family-friendly. You need to have someone to look up to and talk to, who will say, “It’s going to be okay. We’ll figure out a way that this can work. We’re here to support you.” I try to be encouraging for all the women coming up through those same things, trying to figure out how to balance a family or get through other things they need to solve. Having those mentors and role models is a good thing. 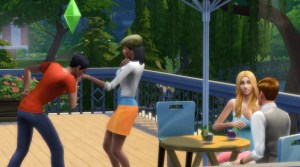 Above: Cafe scene in The Sims 4

GamesBeat: How quickly do you like to see things change? Do you tend to go out of your way to make something happen faster, in the name of gender balance?

Pearson: When it comes to game design, talking about the product itself, when we have the opportunity to push a limit like that, we try to push it. We try to say, “Hey, this is a great opportunity for us to make a statement,” whether it’s about gender balance or the absence of racial bias in The Sims. For us it’s about creating a game that lets you tell any story you want, which means eliminating any of those things that we can. We want you to be able to do anything. We try to move on those really quickly when it comes to game development, because we want to open those doors for our players.

When it comes to the team itself, that’s a harder one to quantify. I’m trying to think of a specific example, a good case of trying to push things forward. I guess one example is, any time we get an opportunity to go to talks about women in gaming, or to talk to the groups that come through here, I always encourage people on our team to get involved in that. It’s good for them and it’s good for the people coming through, to talk to different developers and see different experiences. We jump on that as often as it comes up.

Whenever we send representation to conferences and whatnot, we try to send men and women. We try to send a very diverse group of representatives from the team. Our Gamescom group was a whole interesting mix of backgrounds. We sent one of our German producers, a woman producer, we sent everybody. It was great. What was interesting, too, was that the people we brought in to attend who were fans of The Sims, they were also a very balanced group.

We’re coming at it from a point of view where we want to fairly represent the team that’s making the game and the players that are playing the game. We like to bring in everyone, a diverse group. We try to jump on it from that angle, I suppose.

Above: Female character in The Sims 4

GamesBeat: Organizing the GamesBeat 2013 conference, I had an interesting conversation about why there weren’t women many speaking there. The first reaction I had was, well, there aren’t that many women in leading roles in the industry right now. We do have some, but it’s not that easy to go out and make a gender-balanced conference. We made it more balanced after that discussion, but if you look at the executive ranks in the industry – the CEOs, the venture capitalists – it’s pretty one-sided.

Pearson: I’m working to change that, for myself. [laughs] It is a difficult challenge. Again, it comes back to the fact that if there’s not a lot in the rank and file, you have a challenge moving people up into those positions. You need to encourage people to be a part of that core development so they can strive to those levels and understand that they can get there.

There’s a lot of interesting research and articles about women in leadership across the board, outside of the game industry, and what factors have to do with that. There have been TED talks about it, all sorts of interesting analysis about why we don’t see more women in leadership roles overall. It’s good that it is part of the cultural awareness, because that will hopefully encourage people to push further.

For me, my mom raised my sister and I to know that we could do anything we wanted. She was adamant that we didn’t need anybody else. [laughs] We could be in charge. I was like, “All right, go mom!” But that’s the kind of message that we need to be passing on to the next generation, too. Don’t self-edit yourself. Push yourself toward what you’re interested in. Find your passion and go after it. Don’t let anyone tell you that you can’t do it. That isn’t a message that’s necessarily always been true. We need to figure out how to make that happen more.

GamesBeat: I have three girls of my own. If you encourage them to get excited about math and science, it doesn’t necessarily work.

Pearson: [laughs] That’s fair. It’s true. It’s not necessarily something that everyone is entertained by. 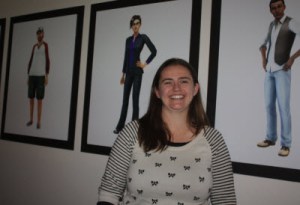 Above: Lyndsay Pearson of the Sims Studio at Electronic Arts

GamesBeat: There are other ways to encourage them to do whatever they want. They may wind up working in games, but in other roles.

Pearson: Absolutely. Just looking at my sister and I, I’ve gone this route of being in game development. I was always into art. I thought I was going to do movies, and I ended up in game development, which I absolutely love. My sister is a teacher, because she decided she wanted to do that. She wanted to help kids. We had the same messages growing up.

It’s absolutely true that you can’t force someone to enjoy math and science, but it’s important to encourage the exposure to it and make it okay to like it when you do like it. What happens a lot is that girls may enjoy math and science, but they feel like it’s not for them, for some reason. That’s something we want to dispel as much as we can, as people come up through their education.

I see a lot of that happening in the pop culture forefront. Before you came in, we were just talking about those Goldiblocks toys they released, for six- or seven-year-old girls. You build a little engineering tool, build a little widget, and it does some cool stuff. It’s cool to see some things like that happening, to encourage that in any way that we can.

GamesBeat: Have you actually measured or tracked things, statistics-wise, whether you’re going up and down as far as the representation of women in the studio and in leadership?

Pearson: I know that in a lot of our conversations at the studio, women have always felt quite well-represented. Anecdotally, I can tell just by going into meetings that we’re represented. That’s a huge part of it.

For our player base, it’s the same thing. I can go on the forums and see men and women talking about the games and telling their stories and sharing versions of themselves. They talk to us on Twitter and ask us questions and the community comes to visit. I’m sure someone somewhere has some numbers, but I definitely have a sense of seeing that continued equality in representation.