Disclosure: The organizers of the Power of Play event paid my way to Seattle. Our coverage remains objective. 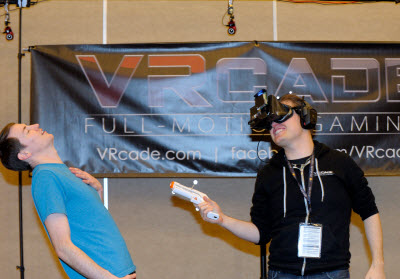 Above: VRcade showed its prototype at the Power of Play event.

VRcade is part of the movement to revive virtual reality. But it’s not focused on homes. The Seattle startup plans to bring back location-based virtual reality, like in the old arcades with real storefronts. That’s the way that it can deliver “perfect VR,” with no technological or cost trade-offs.

In other words, it won’t make you sick. I played a prototype at the Power of Play event in Redmond, Wash., and the effects were cool. I ran through a target-shooting demo with surround-sound effects, where I had to follow audio cues and turn toward sounds that signaled target locations. It was fast, and it didn’t make me barf. And I had the freedom to move around on a good-sized mat.

Motion sickness is one of the reasons that older virtual reality location-based games from the 1990s didn’t take off, and it’s still a problem that companies have to deal with today through clever design of software. But like other VR companies, VRcade believes technology can finally deliver a great virtual reality experience.

“VRcade began as a way to eliminate the barrier to entry for perfect VR for consumers and businesses,” said Jamie Kelly, co-founder and chief executive at the Seattle company, in an interview with GamesBeat. “We want to create a standard with the technology, the hardware, the software, and everything in the facility outside of the home.”

VRcade has been working on the technology for four years. During that time, it has seen virtual reality go from a has been to the hottest trend in video games. 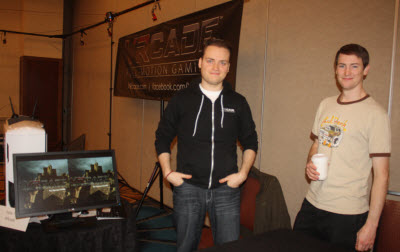 Above: Mark Haverstock and Jamie Kelly, founders of VRcade.

Kelly acknowledges that virtual reality in the home, like what Oculus VR is trying to do with its Oculus Rift virtual reality headset, is very difficult to pull off. Low-cost consumer devices just make too many trade-offs that hamper the experience, he said.

“All the problems of VR in the home we can overcome by putting it outside the home and creating a destination that people actually go to,” Kelly said. “We blame a lot of the past failures of VR on the fact that the technology wasn’t there. You need 20 different technologies for it to work right.”

It’s not going to be easy because VRcade’s virtual reality playground could cost around $1 million. It includes a frame for six to 12 special motion-capture cameras, props, software, a headset with wireless connections, and a full-fledged retail space.

The experience scales about to 12,000 square feet. That could give you an incredible sense of freedom. The cameras capture your movement by shining infrared light against the space and capturing the light as it bounces off markers on your headset and props like your gun. 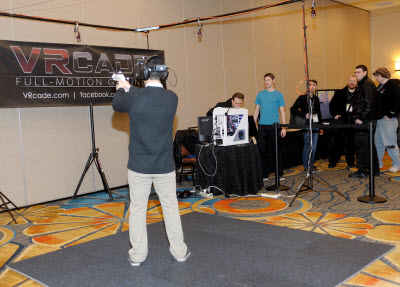 “It finds the center of a cluster of sensors on your head and moves the in-game object so that it is in a one-to-one relationship with you in space,” Kelly said. “That’s very important for multiplayer. You need to know when you will bump into someone.”

Right now, the company has been demoing a prototype with 12 feet by 12 feet of movement space. You can run and jump and the cameras will capture your movement, much like a Kinect 3D-sensing camera will do for the Xbox One.

“We use Hollywood motion-capture cameras that give you very low latency (no delays) and very high accuracy across large distances,” Kelly said. “The infrastructure cost is expensive so no one can afford it in the home. But the upside is that it offers perfect VR, and it can scale so you won’t be stuck inside of a small space.”

VRcade doesn’t see Oculus VR strictly as a competitor, as it plans to use the Oculus Rift system, without one part of it for positional tracking. With Oculus, you’re likely going to be stationary. But VRcade wants to be able to track your movement across a larger space.

“We want to magnify their experience and track the movement of props as well,” Kelly said.

Getting access to great games will be critical to making VRcade take off. Kelly said that any virtual reality experiences built in the popular Unity 3D game engine will be easily adapted (within five minutes) to VRcade. A whole bunch of developers are designing games for the Oculus Rift, and those games will work with VRcade, Kelly said.

The company has some angel investors and has not raised a large round yet. The team is trying to get by with a small amount of funding and employees. 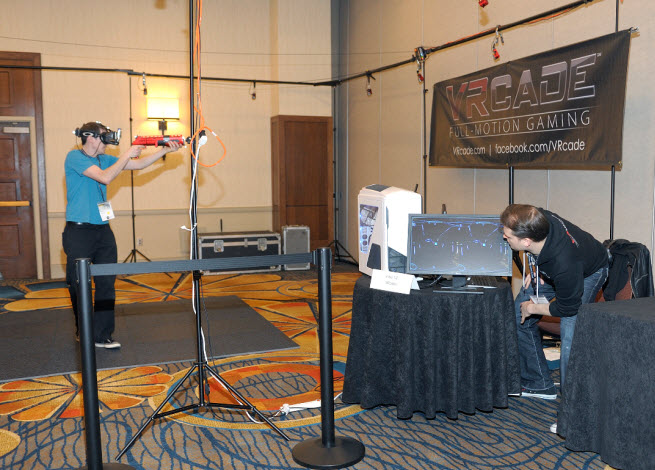 Above: A full view of the frame that holds VRcade’s motion-capture cameras.