Redwood City, Calif.-based EA, one of the biggest and oldest game publishers in the industry, reports earnings for its all-important fiscal third quarter ended Dec. 31 after the market closes today. Analysts and investors are closely watching the quarter, as it is a bellwether for sales of the multibillion dollar industry’s next-generation consoles (Xbox One and PlayStation 4) and includes the first holiday sales season under new chief executive Andrew Wilson. 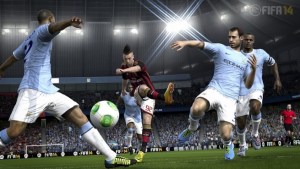 Arvind Bhatia, an analyst at Ray Young, estimated that EA is on track to meet both quarterly earnings targets and full-year fiscal year targets as well. Overall, a consensus of analyst estimates shows EA is expected to report non-GAAP revenues of $1.65 billion and earnings per share of $1.23, compared with revenue of $1.18 billion and earnings pre share of 57 cents a year ago.

Bhatia believes that Titanfall, a mech shooter game coming out on March 11 from EA and developer Respawn Entertainment, has had strong preorders and will drive results in the next quarter. He notes that NPD physical retail sales data isn’t a good predictor of EA results because 40 percent of EA’s revenue now comes from digital sources, such as its Origin online store. But even so, NPD sales for EA looked good in December.

He thinks that EA will benefit from the next-generation console refresh cycle, a favorable mix toward more digital revenues, and more cost controls. He believes that EA is expected to make Battlefield, which had considerable online connectivity problems during the holidays, an annual launch franchise much like its rival, Call of Duty from Activision.

Meanwhile, Colin Sebastian of RW Baird said that the coming quarters are important in terms of Xbox One and PlayStation 4 sales, which are coming off a strong fourth calendar quarter. And that impacts companies like EA.

” With plenty of cyclical risks still ahead, there is also an enormous opportunity if Sony and Microsoft can withstand the onslaught of mobile devices and the inevitable increase in living room competition from Apple and Google,” Sebastian wrote in a research note. “We forecast roughly 7 percent growth in interactive entertainment software, packaged and digital, in 2014 accelerating from flat sales in 2013.”

His favorite pick for the moment is Activision. But he expects EA’s quarterly reports to be in line with guidance, driven by FIFA 14 more so than Battlefield 4.

Adam Krejcik of Eilers Research wrote that there has been worry that EA would miss its targets and cut its full-year guidance because of a challenging retail sector and technical issues with Battlefield. He still expects EA to match guidance and consensus targets, with strong growth in both physical retail and digital game sales.

And Michael Pachter, an analyst at Wedbush Securities, wrote, “After a difficult start to the quarter, we expect EA to limp to guidance due to Battlefield 4’s staying power and the positive impact of the next-generation console launches.” He expects revenue of $1.675 billion and earnings per share of $1.23. He said that Madden NFL 25 and FIFA 14 also saw a lift from the next-generation console sales. Digital revenues are expected to be close to $1 billion in the quarter.

For the full year, he expects non-GAAP revenue of $4.0 billion and earnings per share of $1.25. He noted, “EA has the lineup to deliver revenue and EPS growth for at least the next two years.”

In the coming year, EA will launch titles such as UFC, FIFA World Cup, Dragon Age: Insurrection, and another shooter. And in fiscal year 2016, he expects Battlefield to return along with Mirror’s Edge 2 and Star Wars titles under license from Disney.