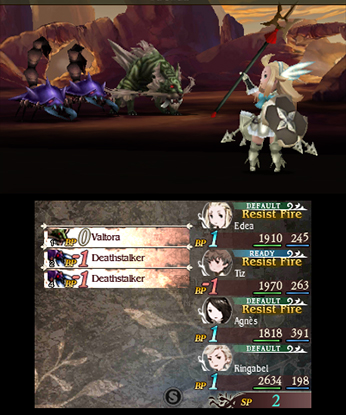 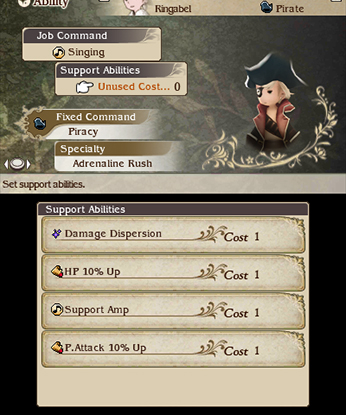 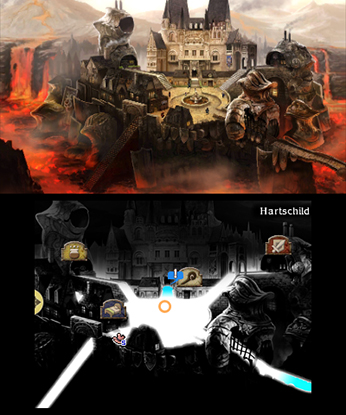 Above: One of Bravely Default’s beautiful cities.

Bravely Default gets a lot a beauty out of the 3DS’s modest hardware. Even without the fancy HD graphics of console JRPGs like Ni No Kuni and Final Fantasy XIII, Bravely Default uses a lot of artistry to impress and immerse you in its familiar fantasy world.

But the soundtrack really elevates Bravely Default over any technical hurdles that would’ve prevented it from reaching epic status. It evokes some of Final Fantasy composer Nobuo Uematsu without sounding derivative. Like much of Bravely Default, the score is simultaneously classic and modern.

StreetPass is the 3DS feature that lets two of the handhelds talk to each other when in close proximity. In Bravely Default, each person you meet in StreetPass adds a new villager to a developing town that you’re in charge of building. You can use villagers to create new buildings, which will then give you access to new items and special moves. The more villagers you have, the quicker you can build.

You can also summon another Bravely Default player in battle, letting them unleash a powerful attack. You can conversely set up a move of your own to send out to anyone you StreetPass with. 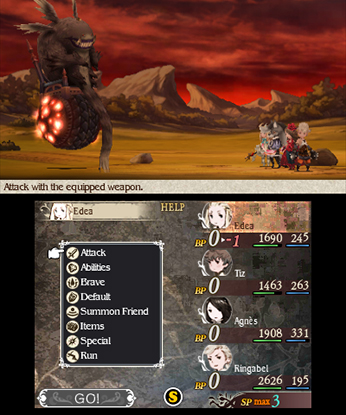 Above: You have a lot of options in battle.

It’s a great use of one of the 3DS’ most unique features. The items I unlocked for sale were especially useful early in my adventure, and the attacks I summoned from friends helped immensely during boss fights. And if you’re worrying that you’ll miss out if you don’t have any friends to StreetPass with, don’t worry. You can also gain a few random friends once a day, so you can still get villagers and other characters to summon.

It’s a lot of game

I’ve beaten every main-numbered Final Fantasy game, and each one has taken no more than 30 hours for me to finish. I’m further than that in Bravely Default, and I still haven’t finished the main story. The length feels closer to a Shin Megami Tensei than a Final Fantasy.

You also have plenty of side quests you can tackle, most of which reward you with new jobs (which you’re definitely going to want). Plus, you can spend a lot time grinding if you want to max out as many classes as possible, which is conveniently easy to do thanks to features that let you increase the enemy encounter rate and the speed of battle animations. You can also repeat your last turn with the press of a single button.

Airy is a little fairy (wow, that sounds like the start of a terrible nursery rhyme) who travels with you just to complain, nag, and annoy. She’s like Navi from The Legend of Zelda: Ocarina of Time except you have to hear entire sentences from her instead of the occasional shout of “Listen!”. Airy sounds like a 9-year-old girl begging for her father’s attention. She’s an annoying trope of a character who, despite gracing the game’s cover, no one would have missed.

She’s especially annoying since the four playable characters are all likable and play off each other so well. Airy, however, adds nothing to the group other than to occasionally spout exposition and to remind people that they need to save the world (yeah, we remember). 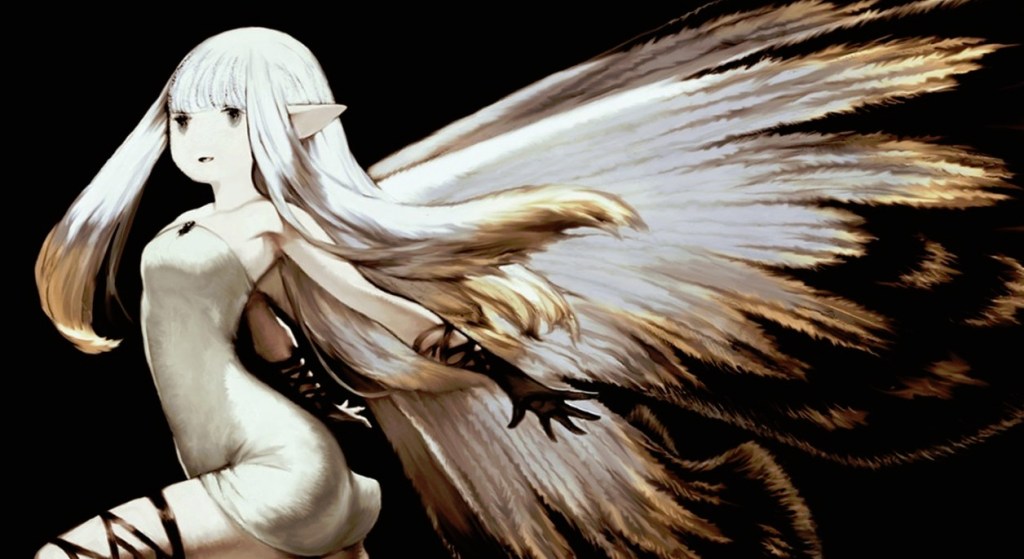 Bravely Default’s decision to transform turns into a currency adds a layer of complexity to classic JRPG combat, and the flexible job system gives you tons of room for customization. Honestly, if you’re a fan of the genre, then there’s little here not to like.

Bravely Default is the best JRPG you could play on the 3DS. If I were Square Enix, I would give this same team a Final Fantasy-sized budget and let them make a proper, numbered entry in the series.

Bravely Default comes out on the Nintendo 3DS on Feb. 7. The publisher provided GamesBeat with a code of the game for the purposes of this review.