Sly Cooper, the stealthy thief from Sony’s popular video game series, will be the latest character to move from the small screen to the big screen. Rainmaker Entertainment and Blockade Entertainment are announcing today they will make a film based on Sony’s Sly Cooper stealth-platformer video game franchise. 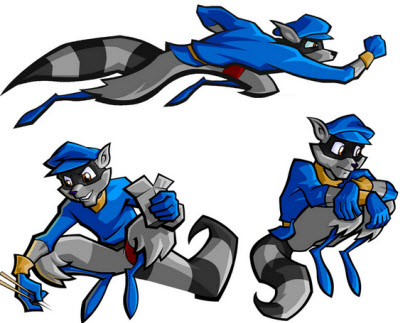 Above: Sly Cooper is cel shaded. The movie will be computer generated.

The film will have a computer-generated art style and will debut in 2016. The movie is the third film based on PlayStation video game characters that Sony Computer Entertainment, the game division of Sony, has greenlit with Blockade, which is also working on the Heavenly Sword and Ratchet & Clank films.

The Sly Cooper film will be written and directed by Kevin Munroe, the director of TMNT and Cat Tale. Brad Foxhoven, the chief executive of Blockade, and Blockade vice president of development David Wohl will produce the film, along with Rainmaker’s Kim Dent Wilder. Rainmaker president Michael Hefferon is executive producer.

“We’re proud we’ve got the game developers intimately involved in the production to make sure we are true to the franchise,” Foxhoven told GamesBeat. “I can’t imagine a Harry Potter film where J.K. Rowling didn’t help.”

The film will be a “kinetic and comedic heist film” that tells the story of Sly Cooper, an orphaned raccoon thief, and his partners in crime, Bentley Turtle and Murray Hippo.

The films aren’t going to have budgets like Pixar’s Monsters University, which had an estimated $200 million budget. That means there’s less time for trial and error in the filmmaking process, Foxhoven said. At the same time, the game franchise is a known quantity with plenty of source material and backstory.

The new movie will be more expensive to produce with CG animation, compared to Blockade’s first video game film, Heavenly Sword, which is based upon the action game’s assets.

In the film, Sly learns of his birth family’s secret legacy: that he comes from a long line of thieves. Then he goes on a quest to reassemble the pieces of an ancient book holding the Cooper clan’s family secrets before it falls into the hands of Clockwerk, an evil Russian metallic owl. The movie setting will shift from Paris to China.

“We are waiting to see what the fan reaction will be, and we hope and believe it will be supportive,” Foxhoven said. “Sly Cooper will have a different art style from the games.”

Rainmaker and Blockade are still working on Ratchet & Clank, a computer-generated film based on the platformer series that is set to debut in the first quarter of 2015. And Blockade is also in post-production on Heavenly Sword, a direct-to-DVD computer-generated animated film. That film will come out this summer.

“For Sly, it was a bit more challenging with its transition from game to film,” Foxhoven said. “With Ratchet & Clank, the style of the game already dictated the look of the film. We were just expanding on was an already well-known CG world, adding to the quality but keeping the look consistent.”

The Sly Cooper game series first debuted in September 2002, and the games have sold multiple millions of copies for Sony across four games on the PlayStation 2, PlayStation 3, and PlayStation Vita systems.

Financing was arranged by Seattle-based Film Financial Services and Jiangsu Broadcasting in China. Rainmaker, the maker of Escape from Planet Earth, is also an investor.

The first scenes of the Ratchet & Clank movie will be shown at Berlinale, the Berlin Film Festival, next month.

Foxhoven acknowledged that a lot of films based on video games have been lousy. But he said the game’s creators are making sure that the films are faithful to the original vision.

“We don’t have to worry about Ratchet having to look like an actor or changing his voice to Leonardo DiCaprio,” he said. “We have different problems from live-action films. But we have a lot of support from Sony and their game developers. They treat us in a lot of ways like they do their top game developers. They are very nurturing.”