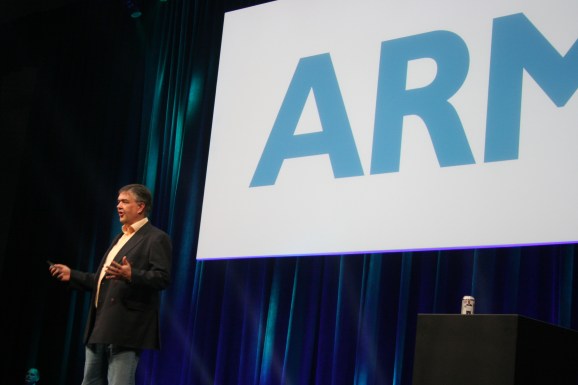 SAN JOSE, Calif. — One company might not be able to singlehandedly take on a major server chip maker like Intel. So today ARM, a company that makes architectures for energy-sipping server chips, is heading more toward a collective approach.

In its quest to make the low-power ARM server style prevalent in data centers around the globe, ARM today released a guide to help server makers and software companies cooperate around standards so that it’s easier for applications to become compatible with servers employing the ARM architecture.

The guide covers technologies like firmware, the operating system, and a server hypervisor to run multiple applications on a server, among other things, Drew said.

Now software developers can work with a common set of standards as they make their applications compatible with ARM. Meanwhile, all server vendors can adopt low-level technologies and focus on innovations that really can differentiate. Companies like AMD, Broadcom, Canonical, Dell, and Hewlett-Packard are on board.

And all that could bode very well for ARM.

“I see the next five years not as a standard growth but as a huge growth in this industry that will lead to huge new opportunities to differentiate amongst the whole of the software community,” Drew said.

Intel already has a widely adopted standard with the x86 server chip set for servers. And Intel has been introducing low-power server chips that could conceivably stand up to challenges from ARM. But ARM-based chips have caught on inside mobile devices, and now that company is looking to replicate its successes by implanting similar technology inside servers.

Today’s announcement from ARM doesn’t directly make ARM the king of the server world. But the move is the next logical step to ensuring energy efficiency gains could become real in more data centers in a shorter period of time.