Garrett’s been hitting the multiplex in the decade since Thief: Deadly Shadows.

The team at Eidos Montreal didn’t keep their influences strictly to the original Thief trilogy for its franchise reboot (due out on PlayStation 4, Xbox One, PlayStation 3, Xbox 360, and PC on Feb. 25). I ran a few questions by game director Nicolas Cantin after playing it and found out that many things — from the area design to lead character Garrett’s new style — drew inspiration from the movies. Particularly the extravagantly dark films of Alex Proyas and Tim Burton.

“Films such as The Crow and even Tim Burton’s Sweeney Todd inspired us, both the visual style and charismatic characteristics of a dark main character,” Cantin said. “Thief’s main environments and the look of Sweeney Todd are really similar, but we’ve added our own signature to them of course.”

That Sweeney Todd look with an Eidos signature went into a plague-infested city (creatively named The City) that bears a heavy Victorian aesthetic, and maybe more than a little resemblance to the similarly stealth-driven Dishonored from 2012. Garrett is now a man of many clothing layers and maybe a bit too much eye-liner, but his ashen skin and sleek moves still give him predatory look, especially when he is put into the players’ hands. 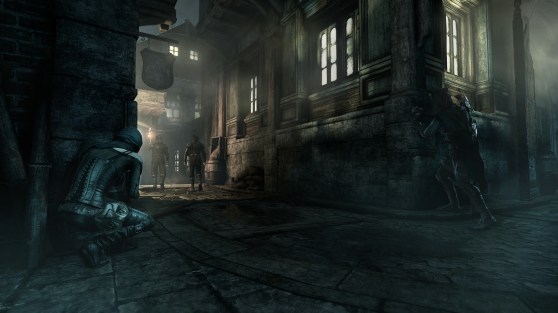 Above: The streets of The City take inspiration from some pretty grungy films.

While its citizens may be diseased and filthy, The City’s architecture is a beautiful thieves’ haven of shadowed cobblestone streets and sloping roofs. The roofs, referred to in-game as the Thief’s Highway, offer a crucial strategist’s perspective on the open urban locations that make up many missions. Garrett’s movement and reactions to these rooftops and side streets were a particular focus.

“Our aim was to re-create the same feel [of earlier Thief games] but really help ensure it was more fluid and more enjoyable,” Cantin said. “Smoothing out the navigation and agility of Garrett was a key point, as was the way the player interacts with the environment itself.”

Navigating along locked gates and sharp fences requires players to use many rooftops as side streets or alleyways. To help get Garrett from curb to roof without spending a lot of time climbing drain pipes, our thief has a specialized claw that can help him grapple across designated walls with a flick of a shoulder button. Other segments require movement along window ridges and scaffolding, similar to how players have sent Nathan Drake up mountain ledges in the Uncharted series.

“The imagery that came to mind when thinking of a Jack the Ripper-esque London with lots of fog and dark, damp cobbled streets is present in Thief,” Cantin said, “Roman Polanski’s Oliver Twist, and the first of the recent Sherlock Holmes films by Guy Ritchie, gave some inspiration for the visuals and even the combat system, too.”

The combat comparison is a reference to the temporary slow motion employed in Guy Ritchie’s “Sherlock Holmes” to showcase the detective developing an instant plan of attack. Combat in Thief does take a more blunt, tactical approach, even if Garrett isn’t calmly narrating the entire time. Enemies telegraph the directions of their attacks pretty openly, leaving room for Garrett to dodge their blow and exploit any weaknesses. A well-timed duck to the left leaves a guard’s flank exposed and ripe for the stabbing.

But all these intimate deadly options wouldn’t mean as much if Garrett was just a floating camera with arms. Being the master thief’s first appearance in both the current and new console generations, Eidos Montreal squeezed the most out of both sets of hardware to give each purse-snatching or guard-puncturing a sense of immediacy.

“The raw power of the today’s hardware really helped us maximize the immersion that the player experiences, working to fully ground them in [Garrett’s] shoes,” Cantin said. “When you look down his feet and body is there, his hands literally reach out and interact with everything he steals and so on. We’re really proud of what we’ve achieved on both next and current gen.”

The team at Eidos Montreal must be big film buffs. The developers are taking players through Victorian England by way of Tim Burton’s last decent movie and doling out swordplay via Sherlock Holmes (as played by Iron Man.) The Victorian atmosphere and the Garrett’s moody new look may recall movie trends, but there is still that distinct feeling of slow-burning, predatory execution reminiscent of Garrett’s earlier missions.

Here’s hoping that the Sweeney Todd influences on this thief don’t lead to any Johnny Depp musical numbers.