In the company’s earnings report today, we read that Facebook’s mobile numbers have soared — both in terms of mobile users and money coming in from mobile channels.

The bottom line: Facebook now has 945 million active mobile users, and 53 percent of Facebook’s $2.5 billion in revenue comes from mobile ads for the final three months of last year.

The number of daily Facebook mobile users is up to 556 million — a huge figure compared to the daily user total of 757 million.

Even more interesting: Nearly 300 million users only access Facebook from their phones or tablets. The mobile-only crowd has doubled since this time last year.

“This is a great way to end the year,” said Facebook CEO Mark Zuckerberg in a call on the earnings.

The road to mobile madness

Last summer, Zuckerberg announced, “Soon, we’ll have more revenue on mobile than on desktop.” By October, the company was able to show that 41 percent of all its income came from mobile.

To put that in perspective, the analysts at eMarketer tell us that Facebook accounted for a 18.44 percent share of all mobile ad spending globally in 2013 — a $16.65 billion market, mind you — up from 5.35 percent just one year ago.

And then, there’s the reason all that cash is flowing in: mobile MAUs (monthly active users). By last fall, Facebook was quickly closing in on one billion mobile MAUs.

Today, the report shows strong and accelerating growth on all fronts — mobile revenue, total revenue (up year-over-year by $1 billion for the fourth quarter), and monthly active users (up 16 percent to 1.23 billion).

Here’s a chart showing mobile MAU growth since the beginning of 2011: 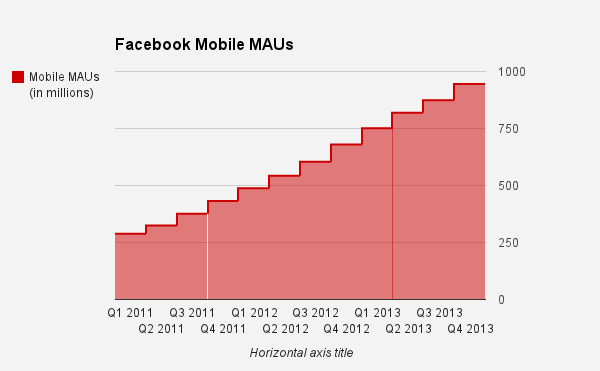 Facebook’s mobile success is hard-won and years in the making. In addition to putting mobile technologies in the hands of every engineer across the company (and mobile-first devs in every team), the company has poured its resources into a few key areas — and some of them aren’t so obvious.

Here’s a look at the company’s stock performance in Q4:

For contrast, here’s how Facebook did side-by-side with some of its competitors (shown as percentage change) in Q4 and the full year: