You may soon no longer need to master complicated design software to dive into 3D printing.

Sixense Entertainment plans to launch a Kickstarter crowdfunding campaign next week to raise money for MakeVR, or virtual reality software that enables anyone to create 3D-printable objects by using wireless gesture-control devices with natural hand motions. 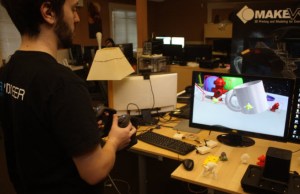 The Los Gatos, Calif.-based company hopes to ride on the popularity of 3D printing and make it far easier for mainstream consumers — not just hardware geeks and artists — to design things in a virtual world and print them out. With MakeVR and Sixense’s STEM-based motion-sensing controls, you can design something in a 3D work space with your hands.

The crowdfunding campaign will help Sixense complete MakeVR for launch later this year and, more important, draw attention to it as one of the easiest ways to create 3D-printed objects, said chief executive Amir Rubin in an interview with VentureBeat.

“You can press the button and it goes straight to the 3D printer,” Rubin said. “It’s like taking something in [the sandbox building video game] Minecraft, building it, and printed it out.”

Within a couple of hours, the printer spits out your 3D design as a plastic object. Besides creating your own item, you can work collaboratively on a design in the same virtual space with someone else in real time.

Last fall, Sixense did another Kickstarter crowdfunding campaign, raising $604,978 to create a wireless version of its motion-sensing game controllers.

That Sixense technology, which is based on motion-sensing magnets that give you 360 degrees of freedom to control objects in a 3D space, has been in the market for sometime via licenses with Razer, which makes the Hydra PC gaming controllers, and Valve for its Portal 2 In Motion game.

But the 3D-sensing controller has gotten a new life with the popularity of the Oculus VR virtual reality goggles. After all, if you’re going to explore virtual reality, you need more than a headset. You need a new user interface to help you naturally interact in a three-dimensional space. And that’s giving Sixense a chance to redefine itself and launch a new strategy that includes selling its own branded merchandise.

Rubin now says that, beyond gaming, the Sixense controllers can be a tool for artists and others to create objects in real time, with no delays and no need to learn painfully obtuse engineering programs.

Rubin introduced me to an intern named Tom, who was a 2D artist who had never created 3D animated object. He began using the Sixense controller and MakeVR. Within two days, he created a 3D-animated Mech (or heavily armored fighting mechanical robot). Professional 3D model builders would normally take much longer to do it.

“He’s more talented than most people, but he learned it from scratch,” Rubin said. 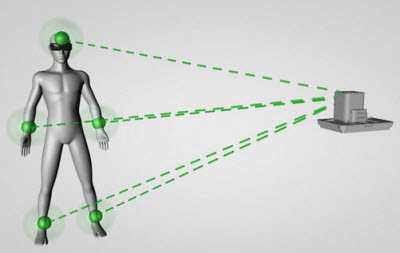 Right now, Sixense is creating its own branded product, the Stem System, for the wireless 3D controls. The Stem System consists of a base that contains a magnet that sends out pulses into a 3D space. The magnetic waves hit sensors and then bounce back to the base.

The system calculates how long it took for the interaction and then figures out exactly where the object is in a 3D space. It works whether you have a line of sight or not, which makes it different from Microsoft’s Kinect motion-sensing system in that regard. The Stem System is also modular; you can put the motion sensors in a variety of places and positions.

Intel is working on gesture-based PC technologies using 3D sensors inside webcams. Over time, that could replace Stem controllers, so Sixense wouldn’t have to create them anymore and could concentrate on software such as MakeVR.

Hardware makers will still be able to license designs from Sixense so they can embed it in their own products, as Sixense will support an open hardware and software development environment. Rubin encourages the community to create a wide variety of motion-sensing devices, such as swords, baseball bats, or head-mounted displays. The system works with Windows, Mac, and Linux. 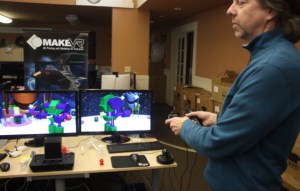 Above: MakeVR will let you collaborate on the same design in real time. Sixense’s Steve Hansted shows it off.

One of Rubin’s employees, Scott Szyjewicz, demoed the system to me in real time. He created a twisted fire hydrant over the course of a few minutes. With his hands on the controllers, he reached into the virtual space on the monitor, grabbed objects, twisted them around, and manipulated things as if he were doing it with his hands. He built the fire hydrant and was ready to print it out in a very short time.

He also started creating objects along with product marketer Steve Hansted. They were able to work within the same MakeVR work space and make changes in real-time. There was no delay, as it all happened instantly.

Paul Mlyniec, head of development for MakeVR, has been working on the virtual reality design technology for a long time.

“The hard part is taking computer-aided design software and putting it together with a two-handed user interface,” he said.

Rubin said, “The biggest challenge has been to find the problem this solves. It’s only really when the 3D printing community came to us that we saw what it could do.”

Rubin founded the company in 2007, but he has been working on motion-sensing technology for about two decades. Sixense has 18 employees and has raised $3 million to date. Sixense has created its own game studio in San Francisco to make demos that make use of its technology. But the MakeVR technology is more like a creativity application.

The company hasn’t determined exactly how much it will raise in the Kickstarter campaign. And it will sell the MakeVR software, but won’t reveal the price until later. 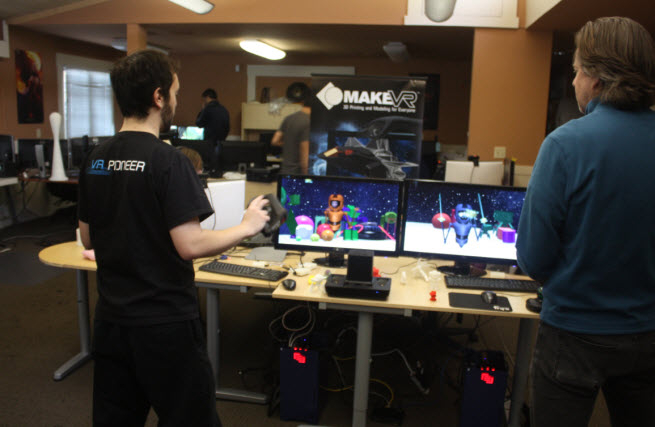 Above: Szyjewicz and Hansted show collaborative, real-time design with MakeVR.