For example, GamesBeat has put together a list of the most unbelievable ripoffs of mobile developer King’s titles. Whether or not you agree with the company’s recent efforts to trademark “candy” and attempt to trademark “saga,” some of these imitators are downright ridiculous.

Background info: Four of King’s most well-known games are Bubble Witch Saga, Farm Heroes Saga, Pet Rescue Saga, and Candy Crush Saga. King may only be able to target games that use the word “candy” for now, but all four of these popular games have copycats in this list. 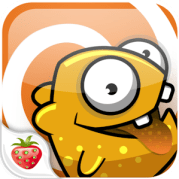 Above: The Candy Monster

This is just awesome. Not only does this game contain the entire name of Candy Crush Saga, in order, it also obviously rips off the mascot from another developer’s popular game, Cut the Rope.

So close. Candy Pony Run might get the developer into trouble, but it’s innocent enough. What purpose does the second half of the title serve? WHY IS IT A SWEET SAGA?

This one also made it onto Apple’s App Store under a very clever alias: Candy Pony Run – Sweet Running Game Saga. Bravo. Much better.

The first of many brilliant ideas to combine the names of two or more King games into one title.

In the words of doge (the popular, rather nonsensical dog Internet meme): Wow. Such different. Much change.

This one is disappointing because the first half of the title is so original. But the second half steals two words from King’s Farm Heroes Saga.

Upon trying to find this game, GamesBeat discovered that it now exists under a changed name: Fire Snoopy Fire. GamesBeat reached out to the developer to ask why.

OK, all three of these games managed to change the theme. Good job, that’s better than many copycats managed. But two-thirds of their titles are still totally copied.

Not to mention: Jewels and coins? Those are probably bigger casual game clichés than candy is. 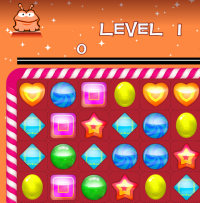 Oh man, this title. Seriously, what were these guys thinking!?

“Hey, I know we’re trying to copy that Candy Saga thing or whatever it’s called, but why don’t we reference Pokémon’s intellectual property too? Couldn’t hurt!”

Wrong. It does hurt. And they copied Cut the Rope too.

These two made me do a double take. Their titles are one hundred percent copied from King’s Bubble Witch Saga, with an extra word added to the end of each.

GamesBeat did some research to make sure they weren’t actually made by King, but they’re both listed by a company called Sumogame.

Seriously, the second one is “Bubble Witch Saga” with King’s name next to it! How did they get away with that one?

Why not? It’s not like we already have too many zombie games.

The publisher of this game actually has a trademark on its title, which contains a word each from two of King’s games. And it plays just like Candy Crush Saga.

Just another candy matching game that contains the entire name of Candy Crush Saga. Nothing out of the ordinary here.

I’m so confused. It looks like whoever wrote this title took every popular search term they could think of and smashed it into a monstrosity of a title.

As for the game itself? According to its only customer review, “absolutely the worst game I ever downloaded. If this is best fun game for boys and girls then why advertise for naked ladies game. Not for kids, not for me.” Geez, that is terrible, but I can’t say I’m as surprised as this reviewer is that the game is no good.

This game is basically Tetris. In fact, The Tetris Company might get to it before King does.

King isn’t just an innocent victim, though. Its games rely on mechanics which have been around for years, and it recently admitted to stealing a game from an indie developer.