Updated on April 24 to include correct revenue and growth rate figures.

While Amazon.com has come to dominate the public cloud business, the rapid growth it has enjoyed in the past few years appears to have slowed down.

In Amazon’s earnings statement for the fourth quarter of 2013, the company disclosed $1.17 billion worth of “other” revenue, which includes the Amazon Web Services public cloud business as well as advertising services and co-branded credit card agreements.

Sure, that is the highest “other” dollar amount in Amazon’s history. But year over year, the figure is up 52.15 percent, and that’s low in comparison to quarterly growth in almost three years. 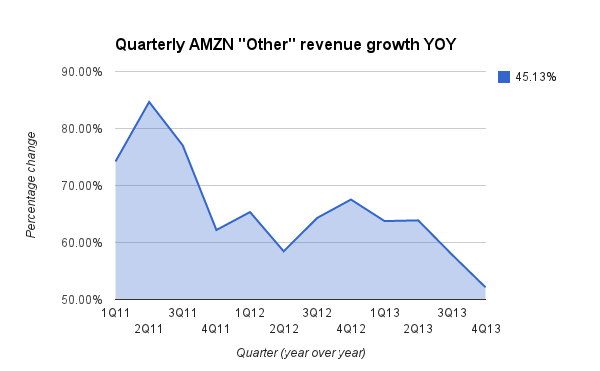 It’s interesting to see the slowdown in revenue growth happening while Amazon made several enhancements to its public cloud last quarter, including a data center expansion in China, new types of servers that customers can use for cloud computing, and a new service to push the freshest data into applications running on Amazon’s cloud.

We can’t give a single reason for growth tapering off slightly, but we see some possibilities.

At least a few companies have been moving away from data-center infrastructure based in the United States following leaks about National Security Agency’s spying activities.

Some sites have been moving from AWS to the smaller public-cloud provider DigitalOcean, which offers fewer features.

Google’s entire Infrastructure-as-a-Service (IaaS) product that competes directly with AWS became generally available in December. And some people view Google as a worthy competitor for Amazon.

And other public cloud providers like IBM and Peak have been seeing lots of growth lately, too.

But however you look at it, the drop in growth is a booster shot for companies working hard to compete with Amazon Web Services.