It’s the unforgiving combat of Dark Souls meets the rune-hunting of Diablo.

At least that’s the equation I came up with after a hands-off demonstration of Lords of the Fallen. The upcoming hack-n-slash action game (coming to PlayStation 4, Xbox One, and PC this fall) from Deck13 Interactive and City Interactive is blending deliberate combat with an arcade-style class system. The result is a difficult game, where your approach to combat not only dictates the amount of experience gained from each encounter but also the rarity of items that your foes drop.

In the world of Lords of the Fallen, humankind has risen up and imprisoned their god. This turns out to have been a rather shortsighted decision, as demons begin to enter the realm at an alarming rate, attacking an ill-prepared humanity. Events throw Harkyn, an outcast bearing his crimes on his face as tattoos, into the fray to discover the cause of the demon invasion. This is a world of broad shoulders and impressively rendered beards, and the combat system supports weaponry as brutal as its wielder.

Lords of the Fallen ties character progression and combat style to three classes: cleric, warrior, and rogue. All three stay relatively within their respective archetypes: heavily armored and slow-moving cleric, more lightly armored and faster warrior, and barely armored but combo-centric rogue. But these choices don’t force players into “playing their classes.” Any ability, weapon, or armor set can work with any class, with varying degrees of effectiveness. Giving a rogue a mace may not deal as much damage to the demon army as single or dual-wielded daggers. Each class is also capable of magic and has its own selection of spells. All spells and abilities consume stamina in different increments, making gauging Harkyn’s stamina meter an ever-present challenge. 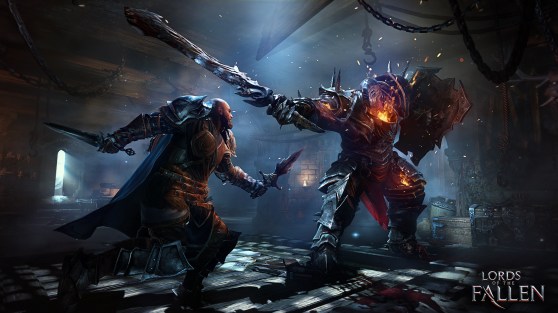 Above: Combat in Lords of the Fallen is anything but button-mashing.

Combat in Lords of the Fallen operates on a symbiotic pairing between melee and magic abilities. Swapping in between the two is immediate and critical to success in combat; you won’t find any grunts to spam a single sword swipe through. The multipart boss encounters don’t come with checkpoints, though, so you should never button-mash. Not that Lords of the Fallen would let you. Repeatedly hitting your primary attack button sends Harkyn into a stuttering cycle of readying and relaxing his weapon. It’s definitely a humorous seizure of animations — until the delay in movement leads to an 8-foot demon slicing his broadsword through Harkyn’s head.

Learning each enemy’s movement and attack patterns, disabling any speed or shield advantages, and using the rare alternate route in the level to gain a critical sneak attack are all necessary tactics required to survive the game’s allegedly high difficulty. In particular, Tomasz Gop, the executive producer and our guide through the demo, highlighted spells as a means to “mitigate the learning process” for certain play styles. But magic in Lords of the Fallen is less of an elemental onslaught than it is creating decoys to distract enemies or staggering them with an ethereal gust of wind.

But Harkyn isn’t completely devoid of status boosts or poisoned blades. You can add runes to augment weapons, shields, and armor, similar to the Diablo series. The manner in which players engage enemy forces determines both the quality and regularity of the runes you acquire. Relying on magic and straightforward offense likely yields a stable supply of mid- to low-range runes, while more deliberate tactics that exploit individual enemy weakness could net the player some of the more swanky upgrades. The amount of times a player dies or saves also factors into these behind-the-scenes mathematics, increasing the rate of rare item drops and experience gained the longer Harkyn stays alive.

Lords of the Fallen has far more in common with Dark Souls than it does God of War, with even low-level enemies requiring a more dedicated, strategic approach than just swinging away. Selecting the right class, weapon, and runes for each encounter is pivotal not only to Harkyn’s survival, but the amount of experience and upgrades you can acquire from each battle.

But whether it’s in Dark Souls class — or a step below — is something we’ll determine this fall.