Octodad: Dadliest Catch is about an octopus trying to hide the fact that he isn’t human from his Homo sapien family. Yes, it’s a dumb concept, but it made me laugh … and even cry.

Out today for PC, Mac, and Linux (and soon for PlayStation 4), Octodad puts players in control of a cephalopod who is trying to raise his human family without alerting them to the fact that he isn’t one of them. This is especially difficult because Octodad’s many legs make it a challenge for him to move graciously on land.

The controls are the star in Dadliest Catch. To interact, players control one of Octodad’s tentacles with both analog sticks. The right stick controls the appendage’s movement on the Y axis while the left stick makes movements into the Z axis. It’s as confusing and frustrating as it sounds, and all of the gameplay centers around this poor sea creature’s struggles with movement.

As awful as the controls sound, Octodad is fun and touching.

Octodad is an octopus that can breathe air, and all he wants in life is for his family to love him. To accomplish this, he constantly battles with his shortcomings to perform his fatherly duties.

On top of that, Dadliest Catch is like a great Saturday morning cartoon. It’s obvious to the player what is going on, but the colorful animated characters in Octodad have no idea that the person slopping around everywhere is actually an octopus. His suit is enough to fool even his wife, kids, and everyone else … except for an evil chef who is desperate to out Octodad to the world and then make sushi out of him.

The basic conceit makes for a really joyful and silly experience that is easy to laugh with, but Octodad also uses its absurd gameplay to touch on some themes that players might relate to.

Octodad’s plight, in a way, reflects everyone’s self doubts.

The way this octopus flails about helplessly as he tries to do the most basic things for his kids is devastating to experience because every parent feels something similar. No one knows what they’re doing when it comes to raising a family and human relationships, and we all live in constant fear that someone will expose us for the frauds we are.

Octodad’s secret is that he isn’t human. To keep that secret, he has to do his best to mimic the way people behave with one another.

This is something I identify with. My secret is that I struggle with the responsibilities of adulthood. Maybe you, like Octodad, are having a hard time raising children or performing at work. It doesn’t matter, because we are all just desperately trying to scrape by without alerting the people in our lives that we don’t really know what we’re doing.

Octodad is frightened because he thinks that he’ll lose his family if they see him for what he really is. Like all of us, he just wants to be loved, so he tries even though everything is nearly impossible for him.

All of this subtext lends a heavy dose of tragedy to what are otherwise simply humorous situations, and it was enough to make me tear up on at least one occasion.

You need to know that the controls are frustrating on purpose.

Octodad didn’t invent this genre of games that require overly complex inputs for basic motor functions. We’ve seen it in QWOP, Surgeon Simulator 2013, and Minotaur China Shop, but it implements the concept well.

The action is fun because it’s so frustrating. It’s satisfying to bash your brain against the obtuse controls until things start to make sense. After a few hours, you might have Octodad moving around with some confidence, and that’s a victory all in itself. 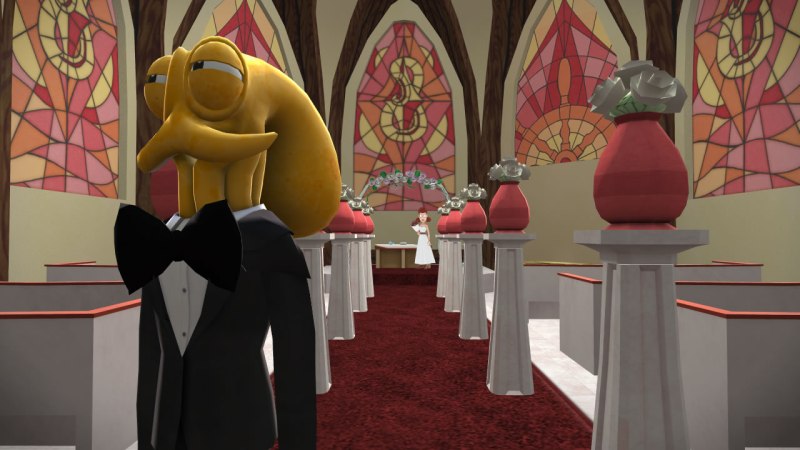 Above: Octodad on his wedding day.

The story spans a series of stages, and these have a variety of straightforward objectives. Grab the frozen pizza. Pour the milk. Buy the tickets. Obviously, these everyday tasks aren’t so easy for Octodad.

In addition to this, the developer has hidden three ties (dad’s favorite!) around each level. These collectibles usually require expert control to obtain.

Dadliest Catch only took  me only a couple of hours to beat. This isn’t a huge problem — and for some it’s likely not a problem at all.

The story hits all of its beats with a nice rhythm, and nothing feels like extra fluff, but I wanted more. I plan to go back and grab all of ties, but I hope I get a chance to explore more of Octodad’s world in the future because Dadliest Catch just wasn’t quite enough.

Octodad is a great example of a game that conveys a message through gameplay. In conjunction with its story, characters, and setting, the controls offer an empathetic look into the life of an extreme outsider trying to fit in and trying to do right by his family.

I love that. Gaming is growing up, and Octodad is some of the best evidence of that.

Octodad released today for PC. Developer Young Horses provided GamesBeat with a download code for this game for the purposes of this review.