Gamers spent more on Google Play and the iOS App Store than they did on 3DS, PlayStation Vita, and other dedicated handheld gaming systems, according to data-tracking firm App Annie. In fact, by the third quarter of 2013, the combined spending on Play and the App Store was three times the size of gaming-optimized handhelds.

Free-to-play games with microtransactions drove most of this growth. App Annie revealed that overall spending on mobile games jumped more than 100 percent from 2012 to 2013. For the year, games with in-app purchases made up 93 percent of all revenue. Only 7 percent of all the money made by games on iOS and Android went to premium-priced apps. 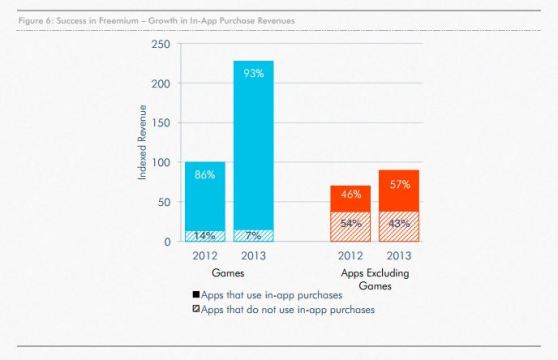 The Japanese role-playing game Puzzle & Dragons, which has players matching colored gems while adventuring through dungeons, was the top-grossing mobile game worldwide. At one point it was making $4.5 million a day in 2013 thanks to its massive popularity in Japan.

Here’s the full list of top-grossing mobile games on iOS and Google Play:

Puzzle & Dragons was so profitable that it was enough to help GungHo Online take the top spot as the highest-grossing publisher on mobile. Supercell was the runner-up, followed by King and Electronic Arts.

App Annie has a full report about the performance of mobile software available to download from its website.