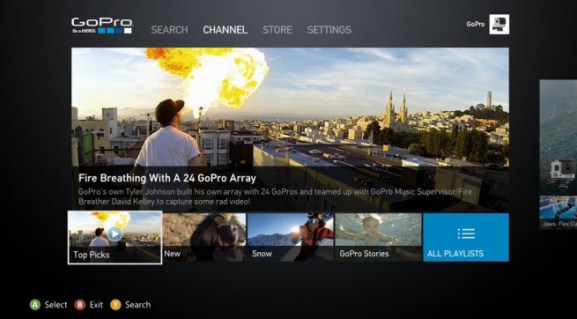 GoPro will have its own app for Xbox Live Gold subscribers on the Xbox One and Xbox 360 video game consoles. Users will be able to access on-demand GoPro videos from their living rooms and search for videos in categories like sports, athletes, and adventure. You can also purchase GoPro cameras and accessories directly from your console and Microsoft’s online store. That’s the first time that Microsoft has integrated the purchase of physical packaged goods into an Xbox platform app.

The San Mateo, Calif.-based maker of GoPro cameras has a growing channel of video supplied by its users who upload action clips of their exploits in sports and adventure.

“Our GoPro Channel app will make it easy for millions of global Xbox Live customers to watch GoPro originally-produced and ‘best of’ user-generated content on their televisions at home,” GoPro founder and CEO Nicholas Woodman said in a statement. “We’re excited to align ourselves with Microsoft and the Xbox brand as we believe our customers share the same desire to enjoy the type of immersive, experiential content that our cameras enable.”

GoPro faces a lot of competition from traditional camera makers such as Sony.