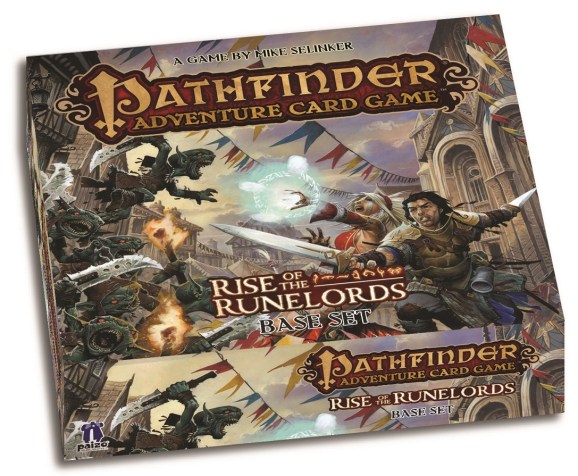 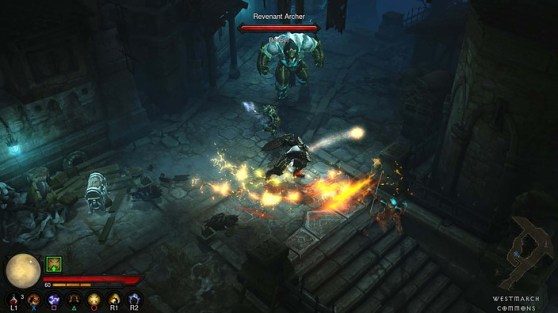 Above: The Diablo series was one of the inspirations for Pathfinder Adventure Card Game.

Diablo players have heard it, whether aloud or in their heads — that late-night call for “just one more dungeon.” Just kill a few more monsters. Just open a few more treasure chests. Just a few more minutes — OK, maybe an hour — and we should have a shiny new sword that’s just slightly better than the one we’re wielding now. And this time, we’re positive we won’t regret it in the morning.

Mike Selinker knows that feeling — the addiction to finding loot in video games, and he’s figured out a way to replicate it in a card game. We’re not sure whether to thank or curse him. 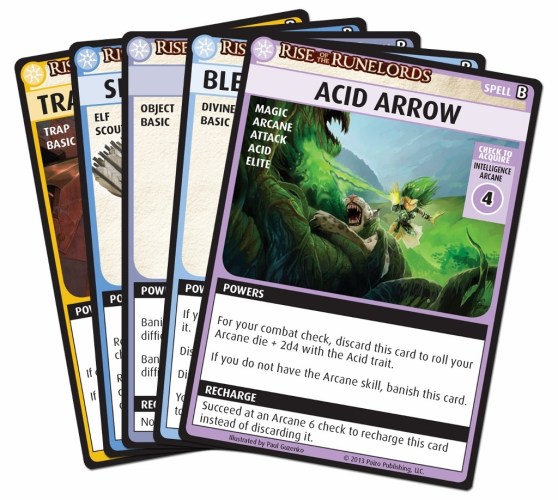 Selinker is the designer of Pathfinder Adventure Card Game — a dungeon-crawling, monster-hunting, village-visiting, character-leveling, cooperative sorta-role-playing game. It’s set in the world of Pathfinder, a pen-and-paper RPG that publisher Paizo says has over one million active players worldwide and has overtaken the seminal Dungeons & Dragons in sales.

PACG is like playing an RPG through cards, but it’s probably not what you think. You don’t just play a match, battle some baddies, determine winners and losers, and then go at it again from scratch the next time. You actually keep the weapons, armors, allies, items, and spells that you find in each scenario and then carry them over to the next time you jump back in.

Your personal deck, which represents all your gear and magic, isn’t just becoming more powerful for the current game (as in the popular “deck-building” genre) — it’s becoming more powerful for good. So feel free to replace your crappy throwing knives with that new Shock Longbow +1 that you found while beating down that band of bugbears. It’s yours for keepsies — that is, until you want to let it go for a Shock Longbow +2. And since your deck is only about 15 cards big, it doesn’t take long to reconfigure it for your next outing (compared to the 50-plus cards in decks for collectible card games like Magic: The Gathering).

Your character also gains “feats” at the end of certain missions, which can translate into better stats (strength, dexterity, constitution, intelligence, wisdom, or charisma), proficiencies with certain armors or weapons, increased hand or deck sizes, or special skills and powers. In effect, you’re leveling up for a long-term campaign that can take a year to finish. (The base set, Rise of the Runelords, comes with almost 500 cards to get you started on several missions, but adventure decks released every two months continue the story and offer higher-level goodies to find.) 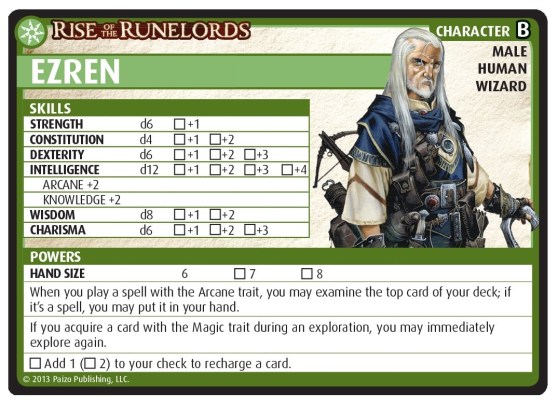 Above: Your character’s stats show you what dice to roll for what tasks, plus what bonuses to add.

“The Adventure Card Game is a fusion of everything I like about card games and everything I like about role-playing games, with a little bit of computer games thrown in,” Selinker told GamesBeat. “I always looked back at games like Diablo and thought to myself, ‘There’s something there’ — what you feel about your character, trading out loot, and running into dungeons and destroying stuff but still having to be careful and strategic, cooperating with your friends like what happens on Battle.net. That all feels like it’s in [PACG] to me.”

It pretty much is. Each time you play, your party tackles a new chapter in the ongoing campaign. In one mission, you might hunt down a dragon that’s killing the local livestock. In another, you might investigate a mysterious cult. Once in a while, you might even get a little break, visiting a local town to restock on supplies, for example. The story is intriguing, and everything supporting it — like the text describing individual locations — is well written.

When you and your friends play a scenario, you’ll have encounters at a variety of specific areas, such as a popular town watering hole, a seemingly abandoned farmhouse, an old manor that’s home to evil spirits, or deep catacombs reachable only through a newly opened sinkhole. At these locations, players take turns drawing cards and attempting to acquire anything good or defeat anything bad that they find there. If they can find the scenario’s main villain — the boss, so to speak — then they must corner and kill him. Do that within 30 rounds, and everyone wins and shares in the riches. Run out of time, and it’s try again from the start. Run out of cards in your own deck, however, and your character will die … for good. And yes, that means you’ll lose all progress to date and will have to start all over with a new avatar.

Currently, PACG is about halfway through the Rise of the Runelords campaign. When the sixth adventure pack hits stores later this year, the story is over, and players can start afresh with new characters in the next big-box set, the pirate-themed Skull & Shackles, due later in 2014. And good/bad news for anyone who’s addicted to PACG: Starting with Skull & Shackles, adventure pack releases will be monthly instead of bi-monthly, so you can spend your money twice as fast. “It’s pretty terrifying,” said Selinker on the extra design work. “I’m not joking. When Paizo said they wanted to go to a monthly schedule, we sort of went into a coma for about three days. But it’s the right thing to do. Players have been starving for content — we can’t get it to them fast enough.”

That’s not just hype. I have friends who can’t seem to get enough of PACG, and “just one more game” is a common refrain in our play groups. Selinker knows his baby is popular but is a bit more modest when it comes to the GamesBeat crowd. After learning of his creation’s inclusion in our tabletop series, he told us, “I hope video gamers like it.”

We don’t think that will be a problem.

Bottom line: Pathfinder Adventure Card Game is not a deep, strategic game by any means, but then again, neither is Diablo. It’s a little tricky to learn at first, but it’s easy to play once you get going. If you like the idea of characters that grow with a long-term story — and playing an RPG in a lighter, card-game form — then make sure to check out Rise of the Runelords. 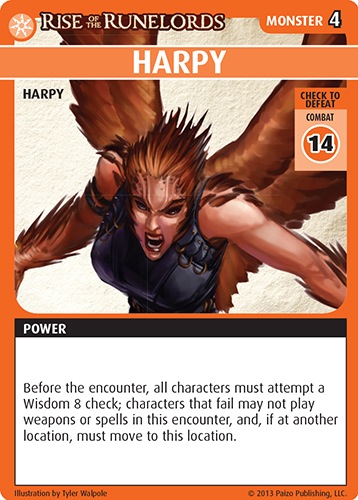 Above: Monsters and barriers are called "banes" and must be defeated or else they may return, slowing down the party's progress.