Code.org got more than 15 million signups in five days for its Hour of Code campaign, with the help of Optimizely’s A/B testing tools.

It took Facebook three years to get this many users.

Optimizely makes web optimization tools. Companies use them to experiment with how variations in their site’s design might impact their business. It claims to be the third-highest-valued startup to graduate from Y Combinator and now has more than 6,000 clients, including Starbucks, Disney, and Salesforce.

Code.org is one of the most well-known organizations out there that promotes computer science education, making it more available in schools and encouraging participation by women and minorities. It participated in a nationwide campaign in December called “Hour of Code” in an effort to drum up attention for Computer Science Education Week.

Code.org used Optimizely to figure out how to market the campaign. The original variation on its site said, “Welcome to the 21st Century. Help us introduce 10 million students to computer science. All it takes is one Hour of Code. Learn More.” 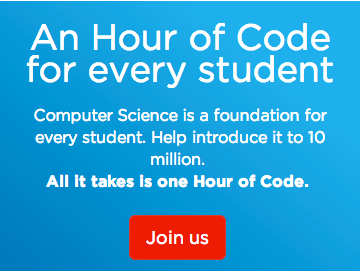 It used Optimizely to test multiple versions of its Hour of Code signup page, highlighting different facets of the campaign as well as “learn more” versus “join us.” It found that “join us” was more effective, as was messaging that emphasized how computer education is the foundation of modern education. The final version (to the right) led to a 29 percent increase of signups, and Code.org cofounder Hadi Partovi credits Optimizely with driving more than 8 million user signups.

Hour of Code ended up being a major success — students wrote more than 500 million lines of code in a single week.

“The night before it started, we had 4.5 million students registered, and we were up at 2 a.m. wondering whether our servers could handle the load,” Code.org cofounder (and Hadi’s brother) Ali Partovi told VentureBeat. ”And we held up, handling 3 million kids on day one and 15 million by the end of the week. I don’t know of any new product or service in history that has opened its doors to that kind of traffic.”

Code.org has a wide reach, and the Hour of Code garnered support from celebrities and politicians in the highest echelons of government. President Barack Obama even issued a video statement encouraging students to participate.

Hour of Code would certainly have attracted millions of signups without Optimizely, but this is one of many examples of how small tweaks can make a big difference.

Upworthy used Optimizely to test adding a recommended content module to the website and learned that this would increase engagement and social shares.