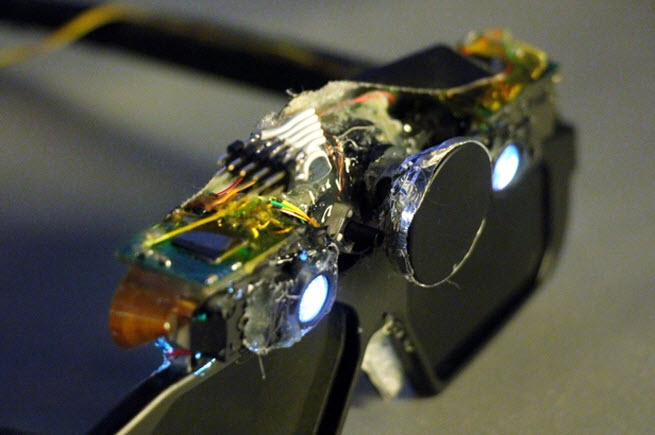 Above: A closeup of CastAR

GamesBeat: So the Maker movement is one of these trends that’s helping you along? 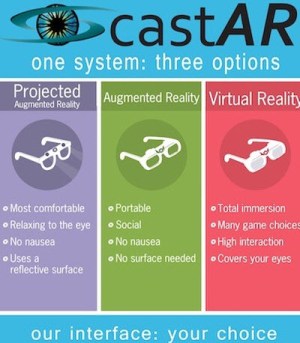 Johnson: That and Kickstarter. Kickstarter has turned the traditional investment route completely backwards. We can go develop our product, show it off to the public, and prove it out through Kickstarter as people vote with their money to make it successful. Now you have evidence that your product is desired by people. You can show that to investors and go that route later on, rather than needing money first before even coming up with a concept.

Ellsworth: Before Kickstarter, we showed thousands of people. We knew this was something you had to experience to understand. We went to almost a dozen trade shows. It was the same experience over and over again, with these long lines. When we hit the go button on Kickstarter, it was a matter of hours. We hit our funding goal and just took off.

GamesBeat: The cost of it is pretty low. That probably also makes it attractive to the Kickstarter followers. How is it that you can start so low and cost-reduce this over time? Why is it an inexpensive technology?

Ellsworth: My background is in toy design, where everything is super-cost-sensitive. You get very little build material to work with when you’re doing any toy. From day one, when we started looking at productizing this pair of glasses, we knew we had to do things to cost-reduce it down.

Our first experiment was like, “How much can we do on one chip to drive two displays?” We made sure that the projectors could be reduced down to one piece of drive circuitry. The tracking we knew was critical. We had to get the tracking offloaded from the computer so we could use cell phones and other inexpensive devices to drive our glasses. So we started with an eight-chip solution, these big boards. Then we slowly integrated each one of those into our FPGA emulator, which emulates what our final chip will be. To get the costs down, in the end it will be a single-chip solution.

The optics were simplified in projected mode. You don’t have to have really complicated optics in the baseline product, so we can offer a sub-$200 pair of glasses to get going for the projected AR mode. With the clip-ons, where you can add the more complicated optics, we’ll have higher price points for people who want to do the extended experiences. Same goes for the RFID grid and the various peripherals.

We’re leveraging the tracking camera from the glasses we developed to go into the wand. We know we have sub-millimeter accuracy for where your head position is. After testing, we proved out the wand in the early days. We knew it was a good input device. But then we were like, “How can we use the same chips we use in the headset in the wand?” That’s what we’re doing. We’re just putting the camera in the wand. It tracks in the same way.

GamesBeat: Have you decided to start with this basic field, rather than something that’s 360 degrees around the user?

Johnson: The final design will be configurable. You could lay a flag up like this, or if you want to do a semi-circle — when it comes down to it, it’s just cloth. It’s however you want to stretch it out. If a person wanted to buy in bulk from us and build a holodeck, just wallpaper a room, they could. 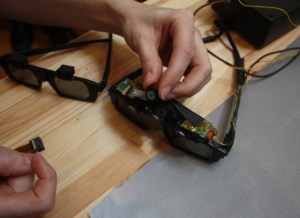 GamesBeat: Does the software designer want to care whether or not it’s a curved surface, or whether it’s a 360 thing? Does that matter to them?

Johnson: From a rendering perspective, it doesn’t care what shape the surface is. Light goes out, comes back.

GamesBeat: So you’re basically in a 3D world. They’ll build a 3D world and you maneuver through it.

Johnson: Yeah. There are natural configurations that work better. Board games work better in more of a flat environment. If you’re doing first-person shooters or flight simulators, you probably want more of a semicircle. It depends on the configuration and what you want to do.

Ellsworth: We did quite a bit of testing about the ideal starter size. We looked at games, what could be done. One meter by two meter felt like a nice starting size. People’s coffee tables and kitchen tables are the right size for a piece of material about that size. 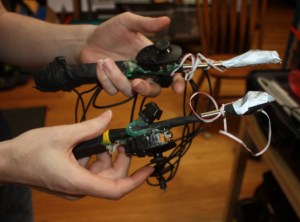 GamesBeat: You can create an effect that impresses people at that size.

Ellsworth: It balances cost, too, the consumer cost.

Johnson: If you use the clip-ons, you don’t need the surface at all. The way they work is that there’s a visor that’s down that blocks the light. That becomes a VR mode, just like other head-mount displays. If it’s up, then it’s augmented.

Ellsworth: There are a lot of applications for iPads where you can put up a marker that’s recognizable by a camera, and then hold up the tablet like a window into a virtual world. But what we’ve discovered is that by putting the displays on your head, so that you don’t have to think about alignment, it becomes a seamless experience.

Johnson: It also gives you a sense of depth. Because you’re rendering from two different projectors, the stereoscopic is naturally in the image, rather than being portrayed on a flat screen. When you see this interactive hologram in front of you, and you interact with it in three dimensions, it’s magical. If you reach out and touch something, it’s not really there, but it looks like it should be.

GamesBeat: Is there a retail application here, then? Something outside the gaming industry?

Johnson: I can give you a hundred different applications. [laughs] One of the examples we showed in the Kickstarter was for the medical community. We found an animated GIF of someone doing an MRI scan of their head. It was this series of 20 slices from front to back. You just see it going through there.

Take that data, and now I arrange the 20 slices as vertical 3D planes. All of a sudden, in this environment you can see the full 3D shape of the head. You see all the slices going through simultaneously. You can use the wand to interact with those slices to get a subsection of all that. Taking traditional 2D data that the medical community already has and presenting it in a 3D way creates a unique perspective for how doctors can view data.

As far as other applications, we talked to an oil guy down in Texas, a geologist. His example case went, Grandma and Grandpa have a piece of land. Here’s this flat geographical chart with a squiggly line representing the oil deposit. Now, if you did it three-dimensionally, they could see the oil deposit underneath where their house sits. It becomes a much more compelling environment.

You could go the opposite end of the scale and build a sound stage of reflective material. Now the actors could wear the glasses and see the CG monsters coming at them. They’d actually interact in a much more seamless environment than just pretending that they see something in front of a green screen.

In aviation, we’re talking to some lieutenants in the Air Force. One of their ideas was, take a regular jet that might be on an aircraft carrier somewhere. Put the retro material on the outside of the cockpit. Now they can wear the glasses inside, sitting in a real jet with the real controls, and use the glasses to project out terrain to the retro material outside the cockpit. Now all of a sudden you have a flight simulator on the real equipment, but it’s very cheap from a hardware perspective, and very portable. They can take the material, wrap it around the outside of a jet, and then go over to a helicopter and do the same. You can do all these experiments and training on the equipment very effectively and cheaply.

Ellsworth: You prototyped that in 15 minutes or so with one of your arcade machines. He had a cockpit arcade machine in his garage. He cut a little bit of retro reflector, put it where the screen was, and hung it over the open sides. You could sit inside of it, look out the sides, and see a game of Asteroids going by. If you looked forward, you’d see it right through the window. It was pretty neat.

The private/public display aspect of it is interesting. We’ve talked to some industrial applications, where they may have an educator there that sees all the steps of what his students are doing. The students might be trying to assemble some piece of equipment in virtual space.