Update June 20th: ESO is now live and launched, and while the pre-order bonuses are gone you can check here for discounts still available.

The official unboxing of The Elder Scrolls Online Imperial Edition was revealed just yesterday through a ZeniMax Online Studios via a YouTube video. (Its funny how unboxing has become such a thing that official sources are now doing it themselves – much better to present the messaging yourselves vs some random kid on YouTube, I’m sure). 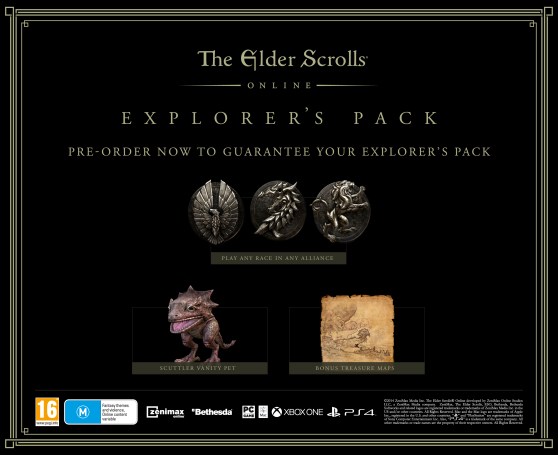 Pre-ordering The Elder Scrolls Online on both the Imperial and Standard Edition will net you the “Explorer Pack” bonus. There’s three specific goodies in this pack:

Early-Access For Pre-Orders of ESO

Update: Apparently prepurchasing straight from official store gets you 5 Days early head start on the standard edition vs the 3 days offered at all other retailers out there. You’ll have to decide if the potential savings from other retailers on preorders (from 20% to 25% off) is worth the 2 days in head start. 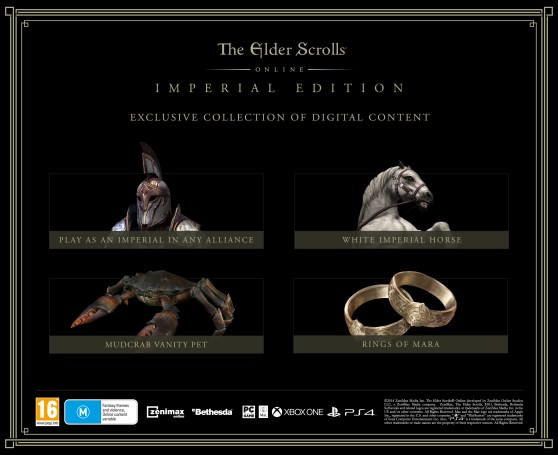 If you pre-order the physical or digital version of the Imperial Edition, you’ll receive all the digital-content pictured above.  (These digital content will also be available in the Imperial Edition for the Xbox One and PlayStation 4). Here’s exactly what you’re getting:

Are these bonuses worth the extra money? If you were already dead set on playing as an Imperial, then the answer is probably clear. If you’re definitely planning to skip the grind to receive a mount in-game and get faster XP boost with a friend, this seems like the best way to go too.

As with all things exclusive, controversy of course will follow. Locking an entire race into a more expensive version of the game got gamers riled up when details of the Imperial Edition was revealed last Wednesday, though thus far Zenimax has been carefully dealing with the backlash by stressing the non-advantages with the exclusive race. Time will tell if this will be a factor (or non-factor) in the game’s success.