The Washington Auto Show (WAS), also known as the “Policy Auto Show”, concluded on Sunday wrapping up ten days with more than 700 car models assembled just blocks from the White House and Capitol Hill. US Vice President Joe Biden was among the many visitors to see the Advanced Technology Superhighway, an exhibit featuring over an acre of innovations in automotive safety and green technology.

Several cool cars from the auto show circuit were on display, such as the Fun Vii, Toyota’s version of a Batmobile with an LED-screen exterior that acts as a digital skin changing color and design like a mood ring. Toyota’s vast exhibit also included the Scion FR-S – the Dell computer equivalent for the auto industry – which you can custom order online with up to 3,000 variations. And Mustang continued its 50-year celebratory tour showing off a collection of its best cars made since its initial model in 1964.

Yet the main attraction and distinctive feature of the WAS was the largest collection of green cars and latest thinking in automotive safety. The National Highway Traffic Safety Administration (NHTSA) lists eight key safety issues, three of which are in the technology domain: distracted driving, connected car, and fuel efficiency. Car makers showed off proposed technology solutions for each of these at the show.

Distracted driving accounted for 10% of U.S. highway deaths in 2013. Mobile phones have increased driving distractions, particularly texting, which carries a 23 x higher risk of accident than driving without distractions, according to NHTSA. Connected car technology shows much promise for reducing accidents, easing traffic congestion, and improving the environment. In particular, sensor technology applications that enhance safety will be more rapidly adopted. Ford and Mercedes illustrated several such apps at the show that are already being implemented.

The Ford Fusion includes several features to combat driver distraction. Its Voice Activated Sync connects with smartphones for calls and uses voice-activated commands to search for entertainment and ask for roadside assistance. The Forward Collision Warning system uses heads up displays and audible warnings when it senses a potential oncoming collision. Its Blindspot Information System similarly warns of oncoming traffic from behind or beside the car. Adaptive Cruise Control monitors speed, brakes automatically when traffic ahead slows, and automatically returns to cruising speed when conditions allow.

Mercedes Intelligent Drive uses imaging and sensors around the car. Its Attention Assist service measures more than 70 variables to establish driving patterns and warning thresholds for signs of driver distraction or drowsiness. Its Collision Prevention Assist automatically breaks to avoid objects as needed.

The Obama administration’s fuel efficiency standards of 54.5 miles per gallon by 2025, or 50% above current levels, are pushing automakers to push forward on fuel economy. Top performing hybrids such as the Chevrolet Volt, Ford Fusion, and Toyota Prius are already rated at 58-62 miles per gallon. Electric cars are the most efficient models, with the Chevrolet Spark EV, Honda Fit EV and Fiat 500e clocking in at 116-119 MPGe, a miles per gallon equivalent for electric cars. But these cars have limited range and require new charging station infrastructure for broader adoption.

Several new technologies to improve efficiency for gas-powered and hybrid cars are already being applied. These include turbocharging/supercharging, EcoBoost, cylinder deactivation when cruising, and autostart/stop technologies.

The Cadillac ELR won the WAS Green Technology Award with an electric motor for driving and a small turbocharged gas engine for recharging the battery to extend its range.

Hydrogen fuel cell cars were much discussed at the show. Hyundai featured the ix35, which it plans to sell in southern California starting this spring. Toyota expects its hydrogen concept car to reach the U.S. market in 2015. Hydrogen fuel, which derives its energy from water, has a lower carbon footprint than electric vehicles, takes less than 10 minutes to charge, and can travel up to 300 miles per charge. But adoption in the U.S. has been delayed as a special hydrogen fuel cell charging infrastructure is required to support hydrogen cars. The U.S. lags behind Japan, Germany, Sweden, South Korea, and the UK in hydrogen car technology following substantial government funding in these countries. California leads in the U.S. having recently approved funding for up to 100 hydrogen charging stations.

Reducing weight is another way to improve fuel efficiency. BMW showed its BMWi3 electric car with a carbon fiber reinforced plastic (CFRP) exterior that it claims is equal in strength to steel but 50% lighter, saving as much as 1,000 pounds on vehicles. While CFRP has been used in airplanes and race cars before, BMWi3 is the first major implementation for the passenger cars.

As Mustang’s 50th anniversary collection at the WAS illustrated, today’s cars have adopted much new technology, but basic auto design and functionality has changed little during this time. The concept cars and new technologies demonstrated at the auto show reinforce a widely held view that the auto industry is entering a period of greater change in the next decade than any previously in the last 50 years. Consumers and auto enthusiasts have much to look forward to in the coming decade.

Paul Asel is Managing Partner of Nokia Growth Partners where he covers in investments in the U.S. and Asia focusing on technology for the mobile and auto sectors. 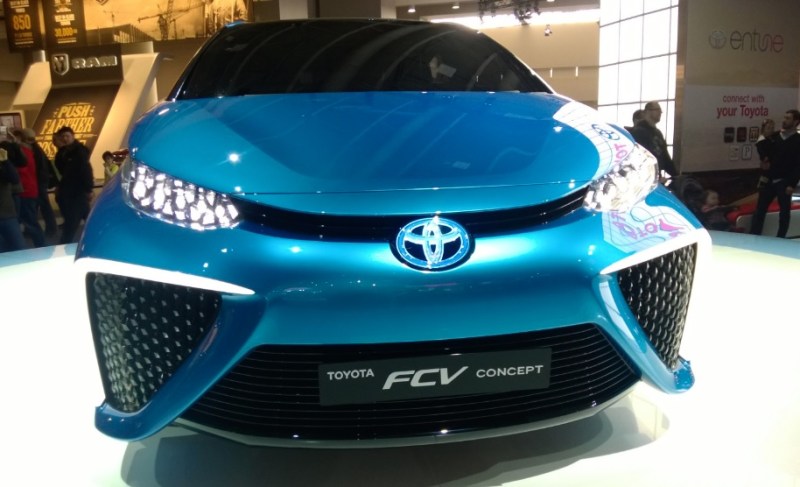