REDMOND, Wash. — Hidden in a business park amid some beautiful woods, Microsoft has built a pretty nest for Team Dakota and its next big game for the Xbox One, Windows, and Xbox 360: Project Spark.

Project Spark is Microsoft’s big bet to create a user-generated community akin to Minecraft, LittleBigPlanet, or Second Life, where the players themselves create and share their own game characters, game worlds, and objects. It is part of the movement to create a sharing economy where the users can sustain a game by producing far more content than the game developers themselves can.

With Project Spark, you will be able to use anything from a standard PC to a huge touchscreen television to build your own video game. You can plant an entire landscape of woods with the sweep of your hand and create your own character in real time, with no delays usually associated with creative software. Microsoft hopes that it can inspire a whole generation of people to become creators, even if they never had any programming experience at all. The game is in closed beta testing now, and players are creating all sorts of cool game worlds, such as Star Wars or Harry Potter fan games.

We visited the headquarters where Team Dakota is putting the finishing touches on Project Spark. We sat down with creative director Henry Sterchi, lead game designer Brad Rebh, and Rahul Sandil, and interactive entertainment industry executive at Team Dakota. Here’s an edited transcript of our conversation. We’ve also added a photo gallery of Team Dakota and Project Spark at the bottom of the story. 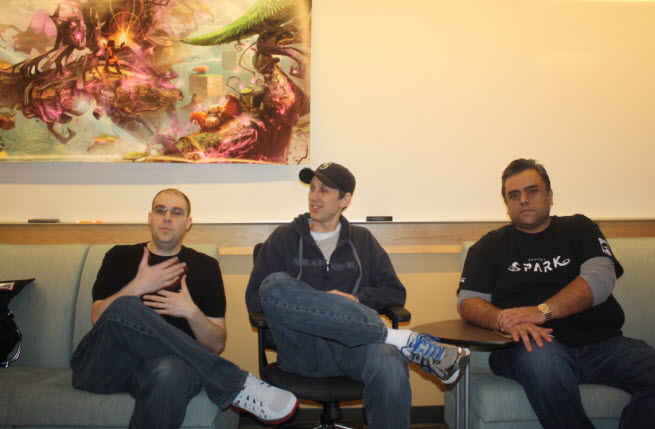 Above: Henry Sterchi, Brad Rebh, and Rahul Sandil of Team Dakota, the maker of Project Spark.

GamesBeat: You started about three years ago. What’s the milieu for coming up with this? Minecraft wasn’t that popular at that time. Was it even out?

Henry Sterchi: I don’t think it was out at the time, now.

GamesBeat: But Minecraft established this whole creativity genre in the biggest way possible. There were people who were trying to create things — Second Life — that almost seemed like they required more professional expertise. Somehow, we got from Second Life to Minecraft. What do you think was important there, and how do you take some of these things and learn from them?

Sterchi: Historically, we’re inherently born with the need to create and play. They’re natural tendencies in us. When you think about grounding it from there — you look at that concept and say, “Everyone wants to play and wants to create.” We had an opportunity to do some blue sky investigations, and we pivoted straight toward that. What does it mean to play? What we saw was, if you think about a kid playing, they run around their neighborhood. They tell stories. They go on adventures.

You look at the modern day and … now they’re sitting in front of a television. They’re having media given to them. When they play games, they go from left to right. They don’t have that opportunity to make their own adventures. So we started exploring that. We looked at everything from Lincoln Logs to play behavior in general. We started thinking past video games. That’s when we started thinking about the genesis of this idea.

When you start thinking about the history of this in a video game form, I think you’re right to say that the popularity has increased recently. A lot of bigger hits are becoming more mainstream. But I go way back to things like Pinball Construction Set, like Incredible Machine, things that gamified creation back then. 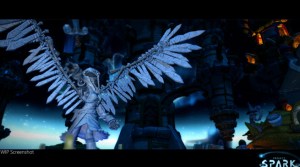 Above: A Project Spark screenshot.

Sterchi: SimCity, yeah. You think about this urge to play and create that’s in us all. These digital blocks, digital architecture types of sets. They’ve been there forever. Right now, we’re seeing a lot of things around STEM [science, technology, engineering, and mathematics], a lot of people interested in programming. We’re seeing programming tools and the ability to create games being more and more accessible. It’s this culmination, this perfect storm around the timing, where it’s something people want to do. They believe they can do it.

If you back up 20 years ago, you’d never imagine that the person performing surgery grew up on Mario. The people that are changing the world right now — presidents and congressmen and figures like that — they grew up on video games. It’s a natural evolution.

One of the things we didn’t show is, on Xbox One you can use Kinect to fully motion-capture yourself. These are things that we want to be able to put into the game, to bring people into the game and create their own rules. We’ve had a bunch of kids come in and play this. We had a bunch of adults come in and play. People just put flying on characters and changed their speed and flew around the level for hours. People went and re-created levels from buildings and structures from The Lord of the Rings. We focus on making sure we’re flexible enough to do either of those things. 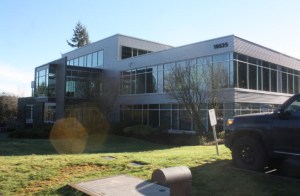 GamesBeat: You have the two modes. That seems to go to the heart of the problem. In a sandbox world, you have no story. If you’re not a professional story creator, how do you even get started on something that is both your own creation but also has some kind of narrative to it?

Sterchi: We let people come at that from a bunch of directions. One of the core things is, we have a universe. We have Spark. We have some of these characters. We have these starter things. Those Champion characters have some backstory. One of the things that’s important to us is, we provide people with just enough of that foundation that they can take that and create fan fiction, if that’s what they want.

If you look at one of the characters that we picked in the Crossroads mode, that character has a story that leaves it open-ended. People can jump off of that as a springboard for where they want to take their story. If they want to go in and edit their own text, we’ve seen people make Zork types of games, text adventures.

But what we do is, we give them that visual storytelling within the objects that are there. When you look at the characters and you see the sort of things like — the goblins speak for themselves in the way they animate, the way they move. They have a bunch of makeshift objects on them. For their defenses, they have a wooden plank, instead of a real constructed shield. We give people these igniters, these sparks, to tell their stories around what they see and what they hear and what we left them a trail to do.

Brad Rebh: Some people, we’re seeing in the beta, are embracing it and loving it. Other people are like, “No, I have my own idea. Here’s how I’m going to use it.”