Brad McQuaid — the father of EverQuest, one of the most influential massively multiplayer role-playing games ever made — wants you to help build his next-generation online game, Pantheon: Rise of the Fallen.

With the tiny startup Visionary Realms, McQuaid has launched a Kickstarter crowdfunding campaign to raise funding for the hardcore massively multiplayer online game. The San Diego, Calif.-based company is aiming to produce fantasy game world where players can enjoy improved systems for group combat — an area that McQuaid has always found frustrating.

In an interview with GamesBeat, McQuaid (the chief creative officer for the startup) explained his vision for the Unity-based project and why he isn’t just joining the Sony Online Entertainment effort to create EverQuest Next. McQuaid has teamed up with Richard Garriott’s Portalarium (aka Lord British, the creator of Ultima, one of the most important names in role-playing games), offering a deal that gives special rewards to players who donate to both McQuaid’s game and Garriott’s upcoming Shroud of the Avatar RPG.

McQuaid started the company in October with veterans who have worked on MMOs like EverQuest, EverQuest 2, EverQuest Next, Free Realms, Star Wars Galaxies, Vanguard: Saga of Heroes, Defiance, and Rift

The campaign has raised $316,646 from 2,419 backers so far, with 19 days to go. It won’t be easy to raise the $800,000 goal at that rate, but McQuaid is hopeful. Here’s an edited transcript of our interview with McQuaid and designer Salim Grant. 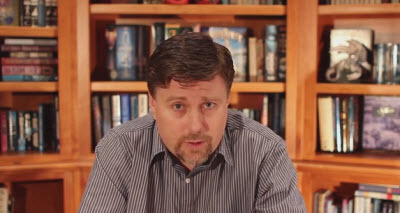 Above: Brad McQuaid of Visionary Realms. He’s the father of EverQuest.

GamesBeat: I imagine you could ask Sony Online Entertainment president John Smedley for a job and a studio to make this kind of game within Sony. Why did you want to do it this way, through a startup and Kickstarter, as opposed to joining a bigger company?

Brad McQuaid: For obvious reasons, we like the idea of a smaller team. We’d love to fund the whole thing via Kickstarter, although I’m not sure if that will happen. If it doesn’t, then we’ll be talking to both investors and some different publishers. But the success that we’re seeing so far, that helps us when we go to a publisher or investor. We can say, “Look, these people are not just interested in our game — they were willing to put money into it.”

We want to keep the company small. At Sigil Games (the previous company McQuaid formed to create Vanguard: Saga of Heroes), I think we maxed out at 105 people. It just wasn’t as enjoyable as when I was on the original EverQuest team, where we had about 23 people. That was a lot more fun, just because we could all talk and share ideas. With 105 people, you have to create all these layers of management. We’re trying to keep this organic. If an artist has a design idea, that’s great. He’s not just supposed to do art. That’s the culture that we want.

GamesBeat: How do you size this project so that you can do it with a small team, given that there’s companies that are taking five years and 200 people to make modern-day MMOs?

McQuaid: Those games, they’re trying to make a mass-market MMO. They’re going to try to appeal to everyone, or as many people as possible. That’s great. We did that with Vanguard, although it got released a little early. We’re making a game now that has a specific target audience, the gamer that’s looking for a more challenging environment and an open world. We’re taking influences from early EverQuest as well as a bunch of modern ideas.

EverQuest, like I said, was made with 23 people in three years for $8 million. That was a long time ago, and things have changed, but in a lot of ways those changes are positive. The engine we’re using, Unity– we’re already playing our game. We can get into combat with NPCs. We’ve got some cool rogue stuff in there already. That would have been impossible 10 years ago. The designers and everyone would be waiting for the engineers to give them some sort of environment that they could start prototyping in. Now, with Unity, we already have that.

Having that target audience will allow us to make the game for a lot less in less time. There are still some games being worked on that are huge in scale, but I think this is the future of MMOs. We’re making one for the people that want challenge back, but there could be all sorts of MMOs that appeal to a specific group of gamers, as opposed to the gamer having to play the big game that tries to be all things to all people and finding out that he doesn’t like this or that part of it. I can see this happening more in the future. Hopefully, we’re blazing a trail for that idea.

GamesBeat: If you have seven people now, what are you expecting for your peak, and how soon might you reach that?

McQuaid: I don’t know of a specific number. Maybe 25 people or so? We have a lot of people we stay in contact with who are planning to leave where they are now and join us once we have funding. We have a lot more people who are interested and have contacted me, or other people on the team, who want to come on board. We have more in touch than we actually need. We can be a little choosy while we continue to build the team.

We’re all working pro bono. We don’t have other jobs. That’s getting us as far as we’re getting, but once we have funding, we’ll be able to more than double the team size.