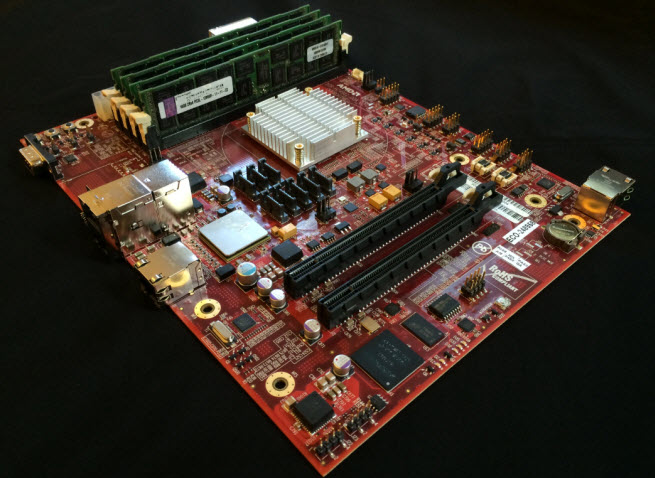 Above: AMD ARM served board 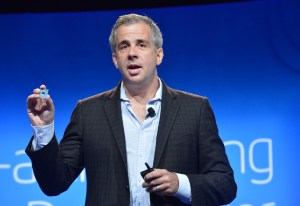 Feldman: But that’s like me saying it’s 75 percent. It’s in their interest to lie to make it small. [laughs] It’s in my interest to lie and make it big. I’m sure the truth lives somewhere in between. Intel has worked very hard to delay and damage their Atom parts. The result is, they’ve had their teeth kicked in.

The Atom part was designed to win the iPad, and they lost the entire category. They didn’t lose one design. They lost a category. That’s what you get, in our business, when you think you can tell the market what it wants.

They tried this once before when they tried to withhold 64-bit on x86 from the market. They hemorrhaged 25 percent of their share. They tried to use market power and leverage to convince Apple that what Apple should do is use Atom instead of an ARM part. As a result, they have zero percent share in the tablet business. Do they have it in their ability to build a better Atom part? I think they do. But it destroys their E3. If I were them, I’d destroy the E3 anyway, because it’s me or ARM.

The E3, the A5, they’re under attack. The prices are hemorrhaging. Do you know the price they give to the largest seven or eight data centers? It’s radically better than what they give to Goldman or Morgan or any of these other guys, so much so that it would change the economics of the industry completely if they gave that pricing to everyone. Why are they giving it to dudes with hoodies? Goldman’s been one of their largest customers. Morgan Stanley’s been one of their largest customers for 30 years. Instead they’re giving the best prices to Amazon and Facebook and Google, encouraging those guys. It’s remarkable, in my view. It’s a deeply pernicious strategy.

Feldman: Yeah. They’re trying to advantage one set of customers over another by price discriminating.

VB: And those are the ones that are less useful to them?

Feldman: At this point in time.

VB: Given the kind of part you announced, what part are you attacking, which part of the server market?

Feldman: We’re attacking the part of the market that is bound below by the 13 server SKUs that they announced with Atom. I remind you that when you and I began talking at SeaMicro in 2009, they assured me that Atom would never be a server part. The last year they announced 13 server SKUs with it. It’s bound above by E5s. That’s the space. We’re doing it at a radically different price point. We’re doing it at radically less power, and with a ton more DRAM support. 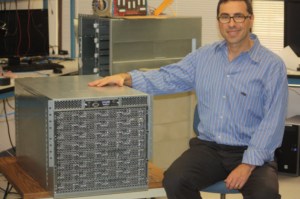 VB: What’s the distinction between the role in the market each is going to play?

VB: Is it clear which size of opportunity there is for each one? Is the ARM opportunity much bigger than the x86 in micro-servers?

Feldman: I think the ARM opportunity in micro-servers begins equal and grows to larger than x86. In mainstream servers, it begins smaller and grows to equal over time.

VB: Intel has dropped hints that maybe they’ll do foundry business for other companies. Maybe they’ll do ARM chips in their foundries. It seems like we’re not too far away from them deciding to do ARM chips themselves in a bigger way. Do you detect that they’re going to move in this direction?

Feldman: Here’s what I detect. Foundries are the single most expensive things to build in all of technology. They cost on the order of $12 billion, and they have roughly 1,800 days of life. Intel, over the past three generations of foundry technology, has been able to wring a decreasing game out of each generation. They rely on this game. And so the game is shrinking while the cost of the foundries is growing. That’s an unfortunate trend to be a part of.

They require the client side of the business to keep their foundries full. If you have 1,800 days of foundry life, every day that it’s not 100 percent full, you’re destroying money. So much so—I remind you that there was an earthquake in Taiwan. TSMC announced that they lost a day and a half on a foundry. That was a material event, that the earthquake had interfered with the production of a foundry. What terrifies Intel, all day every day, is empty foundries. That’s what they’re facing right now.

Their sole advantage on the high end, which they’ve been able to maintain because of foundries, is dependent on the client-side business being able to fill foundries. Now their foundries are looking empty. Their gross margins on the high end are shrinking because of it. Now they’ve gone to others and said, “Would you like to use our foundries?” But if you talk to anyone who’s tried to use their foundries, they’re impossible to use.

TSMC is built from the ground up to be a merchant foundry. Everything they do is about how a third party can deliver a part all the way through. Intel’s designed toward their rules. Every bit of tuning and optimization is not designed for you. You cannot be tuned for yourself and suddenly decide, “I’m gonna open up and be a merchant foundry.” That’s why they’ve had such an absence of success there. But they have to say that, because everybody knows their foundries are going to be empty. Once the foundries are empty, you short the stock.