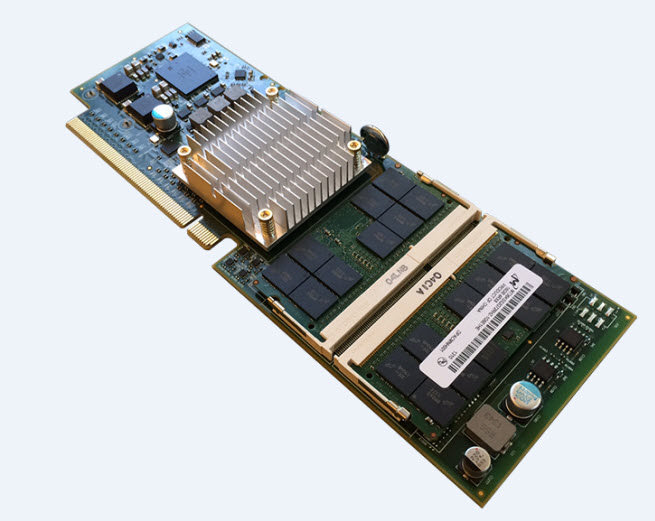 Above: AMD Opteron server board with ARM-based chip.

VB: Is there a reason that this is an area where it’s not that easy to move really quickly off of x86?

Feldman: If Intel mentioned that it’s considering ARM, it’s about a minute a half from throwing in the towel. If Intel decides that it’s unable to compete in x86, the x86 ecosystem collapses.

VB: It’s hard to admit that, I guess. It’s the same boat they were in before the Opteron, right?

VB: How do you guys play that strategy out again here?

Feldman: What you do is, rather than try to dictate to the market – “You will have x86 and you will like it. You will not have 64-bit and you will like it. We will withhold 64-bit and put it on an Itanium part only.” – you listen to the market. When they say, “We want lower cost, smaller, lower power-consuming parts,” you think about how you can get there. If you can get there with ARM you make the move.

I know it feels a bit slow for us, but it’s a big change. We committed to it, and we are building a whole lot of ARM server parts and other parts with ARM.

VB: How do you look at competition from other directions, like Nvidia’s ARM-based Tegra?

Feldman: If Nvidia wants to move up into the server market—I’m not particularly concerned with Tegra. The winners, in the end, in the ARM server market, are Samsung – they haven’t announced, but I assume they will play – Qualcomm, and us. That would be my bet.

I would bet also that Google ends up doing their own parts. Amazon is already doing its own CPUs. They use them in the Kindles now, but they will do more. They have a chip team, a whole mini-company called Lab 126. Their job is to design chips.

VB: Do you believe that you have a shot at some of these guys, because of the semi-custom positioning?

Feldman: For sure. We’re good at that. We’re the best at that. That’s why we’ve run the table in the big semi-custom world.

Feldman: That’s the highest-volume single consumer place for a CPU. Each of those guys announced a day with a million units. That’s pretty good. That’s a lot of Xboxes. You just think about what it means to sell a million of anything in a day, let alone a box like this.

Above: AMD is the No. 2 maker of PC processors.

VB: Does semi-custom make the same kind of sense in the data center?

That’s what Google has tried to do at the building level. They’ve tried to modify the building and the racks and the cooling and the servers themselves, the networking and the software. But what they’ve been unable to modify is the processor. It’s the same with Facebook and Amazon and all those guys.

VB: If you can ramp this up, what’s the nature of the ramp?

Feldman: 2014 is the year where people kick tires, where data centers maybe announce ports. Major OS vendors — Red Hat, Canonical, and others — announce full-fledged operating systems. This is the year that the first credible ARM-based servers arrive. The software ecosystem moves from adolescence, where it is right now, to maturity. In 2015 you see wide-scale adoption.

1 2 3 View All
How startups are scaling communication: The pandemic is making startups take a close look at ramping up their communication solutions. Learn how