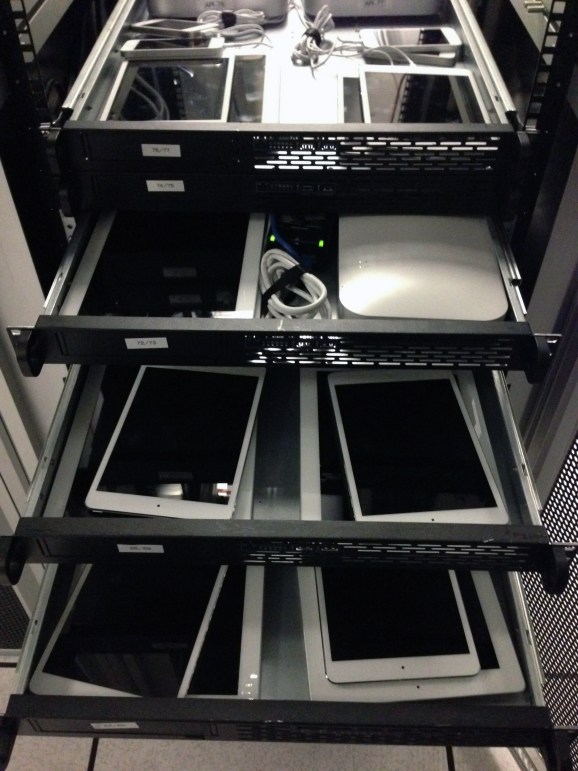 A few of the devices in Appurify's device farm at a San Francisco data center.

Mobile developers can deploy a buggy app and endure the wrath of tough critics. Or they can test it first to make sure everything works.

Today Appurify is aiming to make the testing process easier.

The startup is launching a service to give mobile developers access to a bunch of different iOS and Android mobile devices on which they can test web-based or native mobile applications. The machines in Appurify’s fleet — around a thousand strong, all sitting in a San Francisco data center — run with a variety of network conditions and on multiple wireless carriers’ networks, to give the most accurate picture of how applications can behave.

Through web-based software, developers can check out the results of the tests and inspect granular data from the devices to figure out exactly what might have gone wrong. And they can run tests continuously to see how application performance improves or degrades over time.

The Appurify Mobile Platform could be useful for a wide range of companies, especially because both startups and major software companies have been thinking about ways to mobilize their desktop applications. And the many configurations of Appurify’s hundreds of mobile devices could raise the standards for testing mobile apps.

Other companies, such as Perfecto Mobile and Keynote, with its DeviceAnywhere service, make mobile devices available for testing on a monthly subscription basis. But Srinivasan believes his company stands apart, especially when it comes to testing applications in a completely automated fashion. That’s opposed to just getting access to different kinds of phones and then paying a quality-assurance staffer to manually go through every single part of the application. “You might as well buy one or two devices yourself,” Srinivasan said. What’s more, he said, some other mobile testing companies don’t provide crash reports and other data that developers can mine to learn what worked and what didn’t.

Big companies like Dropbox, Google, Macy’s, and Yahoo already use Appurify. Now the company is looking to make its services far more pervasive.

Last May the startup announced a $4.5 million funding round, which Google Ventures led.