Frodo has Sting. Thor wields Mjölnir. And I fight with the BAMF. Fitted with a high-capacity magazine and a spinning gatling barrel, BAMF can fire up to 100 spiky bowling balls at my opponents’ faces before I have to reload.

It’s not the best gun in the game, nor is it the prettiest. But it’s my gun, and that’s all that matters.

Personalizing your weapon of choice is a simple but addictive part of Loadout, a free-to-play third-person multiplayer shooter out now on PC. It prides itself on twitch-based gameplay: If you’re not constantly jumping or rolling away, you’ll die. Spending real money (transformed into a premium currency called Spacebux) won’t get you better guns, but you can get a cool hat or two for your character.

Winning was nice, but it wasn’t a priority. I just wanted more money so I could improve my guns. Unfortunately, a bunch of online bugs prevent me, and many others, from expanding our collections. 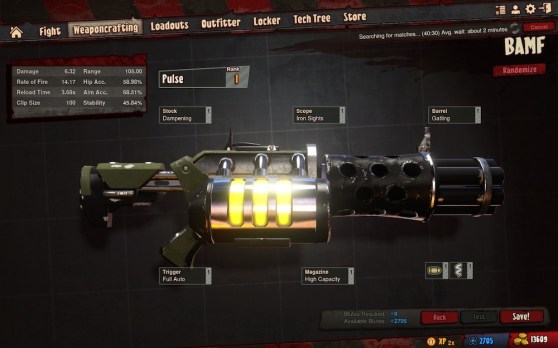 Above: The object of my affection.

You’ll spend a lot of time in the weapon crafting menu. Switching between gun parts is quick and easy. Before you commit to buying a brand-new scope or barrel, you can jump into the testing arena, fire your gun a few times, and immediately jump back out when you’re done. This made tinkering a breeze, giving me plenty of time to make small tweaks to my machine guns and rocket launchers while waiting for a match to begin.

When I made something that I was truly proud of, I couldn’t wait to try it out against my fellow gun makers online. Each battle earns you Blutonium, the currency for unlocking new parts and upgrades. Every time I had saved up a few thousand Blutes, I went right back into weapon crafting and looked at what else I could change. It’s a satisfying feedback loop that always pushes you to make bigger and better weapons.

Developer Edge of Reality introduces some refreshing changes to traditional multiplayer modes. Instead of capturing a flag, Jackhammer gives both teams giant hammers that they have to steal from one another — it’s also useful as a devastating melee weapon. Matches often turn into intense chases as you try to run back to your base with the hammer in your hands. 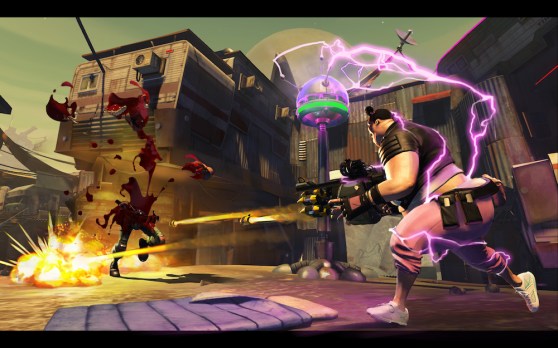 Above: Successfully capturing points in Annihilation gives one player a 30-second damage buff.

Jackhammer is also one of the reasons why Annihilation is so exciting. It combines Jackhammer, Death Snatch (collecting vials from dead players), and Blitz (capture control points) into a game mode that feels less like a battle and more like a mini marathon. Completing objectives — stealing the hammer, grabbing the two control points, and killing other players — raises your team score, and when one side reaches 10,000 points, the shields on the opposing team’s ship disappear. Players must steal the hammer, go back to their own ship to charge it, and then head for their opponent’s base again to destroy the power supply and win the game.

Momentum constantly shifts back and forth, so you never know who’s going to win until the shields drop. When you’re on the losing side, making one last stand in front of your ship is thrilling, even if the enemy manages to slip through the cracks of your four-man team.

I started Loadout three days before its release on Jan. 31, and at that time, a nagging bug prevented me from playing Annihilation. When the game came out on Steam and a new influx of players tried going online (maxing out the servers’ capacity), matchmaking errors and waiting times multiplied exponentially. Even the developers had to wait an hour or more to find a game for one of their livestreams.

Players turned to the Loadout Twitter account and community forums to voice their frustrations, and Edge of Reality updated Loadout multiple times over the last few days to address these issues. But the work isn’t over. Server outages and other problems are still common. As of this review, I can jump into games again without any hiccups, but it’s difficult to say how long this will last.

Loadout only has a handful of maps, and while they’re visually impressive, I’m already tired of playing on them. Certain combinations of maps and modes tend to show up over and over (like Jackhammer and Trailer Park). Most of them revolve around an intergalactic mining theme, so you’ll see a lot of locations carved around rock formations and canyons (compare these two maps, for example). After a while, they all just start to look the same.

An art style that’s stuck in the past

Loadout feels old. Its art style is similar to other free-to-play games like Offensive Combat, Team Fortress 2, and Super Monday Night Combat. The dated pop culture references — one of its many taunts is the Gangam Style dance — and the over-the-top machismo have already been done before, and it doesn’t offer enough reasons to care about them again. 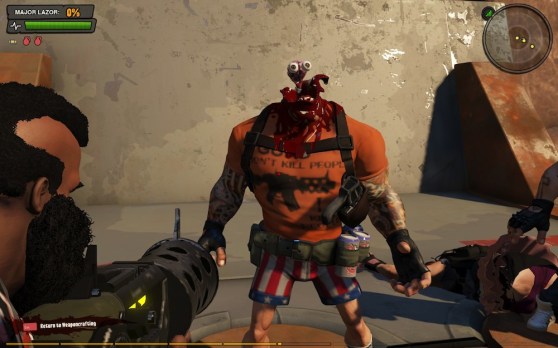 When it works, Loadout hooks you in with its deep weapon-crafting system and frantic battles where everyone is trying out their own crazy creations. And to its credit, Edge of Reality has shown incredible resilience in responding to the server problems so quickly. But Loadout isn’t worth playing until it solves them.

Loadout is out now for free on PC. The developer provided GamesBeat with a Steam code and a digital pack filled with extra in-game currency for the purpose of this review.