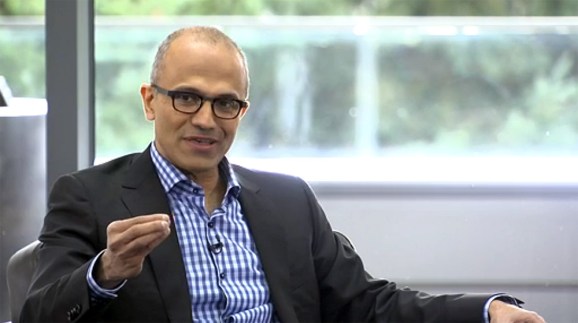 Satya Nadella, Microsoft’s former cloud head and its new CEO, refuses to get bogged down in the company’s history or traditions.

“This business of ours is exciting because it doesn’t respect tradition, what we’ve done in the past,” said Nadella to a room full of Microsoft customers this afternoon. “What’s going to define Microsoft going forward is innovation in a mobile-first, cloud-first world.”

Outgoing CEO Steve Ballmer’s sluggish push toward cloud and (particularly) mobile positioned the company behind other market leaders. Rather than emulating companies like Apple, Google, and Amazon, Nadella intends to place more focus on devices and services that are unique to Microsoft, “using assets and ingenuity that are not replicable by others.”

But that doesn’t equate to a Microsoft-only platform approach. Nadella envisions a “people-centric IT” experience where everyone can use the device they want, IT gets the control they want, and neither party has to compromise. That obviously entails identity, device, and security management across platforms like iOS and Android.

“It’s not about one single device anymore,” said Nadella.

Nadella’s cross-platform focus may also mean broader availability of software like Microsoft Office, which has been largely married to Windows under Ballmer.

Nadella also aims to bridge the gap between Microsoft’s consumer and business markets to better reflect how people actually use its services.

“We don’t compartmentalize between consumer and business; we think about the user,” he said. “The user is obviously going to have a life at home and a life at work, so how do we bridge that as more and more of what we do is going to be digitally mediated?”

For these next few days, Nadella plans to spend a lot of time with customers, partners, and investors to get up to speed on all parts of Microsoft, some of which aren’t familiar to the former cloud chief.

“Being in touch with both perceptions and realities will help us do our best going forward,” he said.

To learn more about the new Microsoft, read our feature on Nadella and the company’s future.