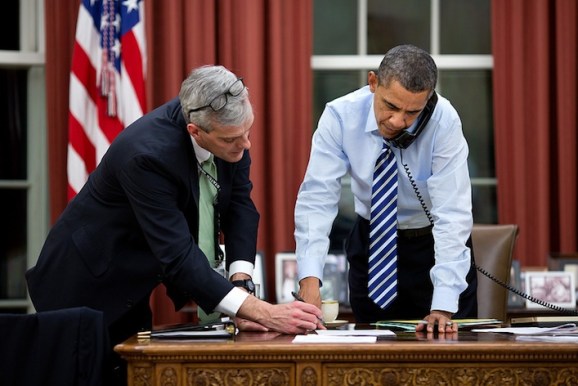 President Barack Obama announced the ConnectedED initiative last year to bridge that technological gap. Today, he announced that U.S. companies — including Apple and Microsoft — have committed $750 million to the effort, and that the FCC is setting aside $2 billion from service fees

“I want you to know why it matters that we make sure technology is available to every child,” the president said. “Technology is not the entire answer, by the way, when it comes to educational excellence. We’ve got to make sure we’ve got outstanding teachers. We’ve got to make sure that parents are doing what they need to do. We need young people to make the effort and to have high expectations for themselves. But technology can help; it’s a tool, it’s just one more tool.”

ConnectedED is an ambitious plan to connect 99 percent of America’s students to the Internet through high-speed broadband and wireless over the next five years. The short-term goal is to connect more than 15,000 schools and 20 million students in two years “without adding a dime to our deficit.”

He called on support from the Federal Communications Commission, federal government, states, districts, schools, communities, and businesses to make this happen.

During his recent State of the Union address, Obama revealed that Apple, Microsoft, Sprint, and Verizon had helped with the “down payment,” but the extent of that help was not disclosed until today.

Apple is donating $100 million in iPads, MacBooks, software, and support. AT&T and Sprint are contributing free Internet service through their wireless networks, Verizon is contributing up to $100 million in cash and in-kind contributions, and Microsoft is making Windows available at discounted prices and offering 12 million free copies of Microsoft office software.

Improving Internet access in schools has been a major issue for Obama, as has promoting computer science education and entrepreneurship.

We live in an increasingly digital world, where an increasing number of jobs require technological skills. The Labor Department came out with a report suggesting that 65 percent of grade school kids will have a job that doesn’t even exist yet.

We also live in a country with a shrinking middle class, plagued by a youth unemployment crisis, and where students from lower income backgrounds are at a serious disadvantage.

Obama said that only 30 percent of students have access to high-speed Wi-Fi. The drive behind ConnectED is that ensuring access to “cutting edge” technology will better prepare students for successful careers, as well as help teachers be more effective in the classroom.

“We can make this happen. And just imagine what it will mean for our country when we do. Imagine what it could mean for a girl growing up on a farm to be able to take AP biology or AP physics even if her school is too small to offer it, because she’s got the access to technology that allows her to take those classes online. […] Imagine what it means for educators to spend less time grading tests and papers, more time helping young people learn. Imagine more businesses starting here and hiring here, because they know for a fact that the young people here are going to be equipped with the skills that are better than anybody else on Earth.”

The idea of integrating technology into education is known as “blended learning.” Rather than traditional lecture-based classes, students access instruction online and through devices like the iPad. This means they can learn at their own pace, receive customized lessons, and their progress is automatically tracked.

This approach also serves beleaguered teachers, who can make better use of their limited resources.

Apple said in its recent earnings report that over 10 million iPads are in schools today, and U.S. education institutions have purchased over 7 million iPads, and this is just the beginning. Many school districts have been reluctant to embrace new technology due to budgetary and security concerns (as well as stubbornness), but this is changing.

Wi-Fi and iPads are hardly the cure-all to America’s deep seated economic and educational problems, but $750 million is a big’ ol kick-in-the-pants start.