VANCOUVER — In Canada, 75 percent of major retailers accept contactless payment. In the U.S., fewer than 2 percent of retailers do the same.

“Canada is the most ready country in the world for mobile payments to take root,” Rogers Communications VP David Robinson said today at the Wavefront Wireless Summit in Vancouver. “Ten percent of domestic transactions are contactless … and that’s going up about 1 percent a month.” 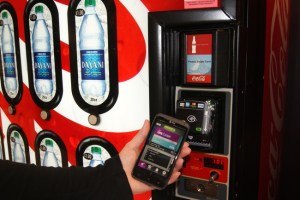 But the ubiquity of contactless payment technology in Canada has paved the way for virtual wallet technologies that haven’t yet been able to take hold in the U.S.

Which is exactly what Rogers is banking on — literally. A Canadian telco that offers mobile services, Rogers recently also became a bank as part of its quest to redefine mobile shopping. It’s launching Suretap, a mobile wallet that aims to be pretty much what your “leather platform wallet” is: a collection of all the ways you might want to pay, served up as you want them, when you want them. Suretap uses NFC to be immediately compatible with all contactless point-of-sale systems, but it also uses 1D and 2D barcodes to be compatible with non-NFC systems — and other mobile phones.

Which means that most modern smartphones, with the notable exception of Apple’s iPhone, are automatically compatible. 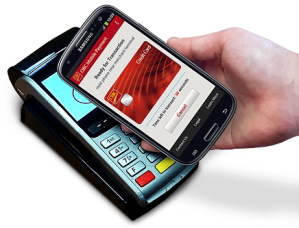 It’s an interesting play — not least because Rogers will preload it on smartphones that it sells, or because it’s a platform that developers can hook into and build on top of via APIs — but it’s only possible because of major technology upgrades in Canada that have it ranked the second-leading national market in contactless payment, according to Juniper. That’s clearly a positive for Rogers — and the company plans to entice its existing subscribers to use Surepay via a compelling strategy:

“Suretap will be preloaded with a prepaid MasterCard to encourage trial usage,” Robinson said.

For card issuers like MasterCard and Visa, Suretap will be cheaper and faster. New cards can be provisioned at Internet speed — essentially real time with no need for manufacturing and mailing. Retailers will also see benefits, Robinson said, as they’ll be able to know who their clients are and be able to communicate with them via Suretap. And users will be able to manage all their payment processes digitally, including topping up pay-as-you-go cards, sending gift cards, and, presumably, managing allowances for kids.

As a digital payment solution, Suretap will have access and connectors to location data, identity, payments, loyalty programs, messaging, personal data, and offers and coupons. Security will be key — as will consumer awareness of what the solution can and can’t do — and an access code will protect users’ access to the app.

The APIs and third-party developers are key to Rogers’ plans, says Robinson, who seems realistic about what a major corporation can and cannot do.

“We’re a telco, we do big things well … we do little things badly.”

While Canada might be a good test market for mobile payments, the U.S. will get chip and PIN — and contactless payments — over time, Robinson said. That’ll happen for a variety of reasons, likely by 2015.

Not least of the reasons, of course, is security:

“A lot of the U.S. doesn’t support chip and pin yet … although the CEO of Target is reconsidering that,” he said with a wry smile.

A big question, however, is Apple.

Apple’s iPhone infamously does not support NFC, and although theoretically Suretap could work via 1D or 2D barcodes — or, as Google Wallet does on iPhone, with a smart plastic card that morphs into whatever credit card you want to use — in practice a mobile wallet that actually handles real payments on Apple’s platform that is not from Apple itself is likely to run into issues.

“Apple is an amazing company, but they march to the beat of their own drummer,” he said.