You are one of 15 students trapped in a high school game of murder run by a psychotic teddy bear.

No one can claim that Spike Chunsoft or NIS America is burying the lede with Danganronpa: Trigger Happy Havoc. The high concept insanity of this visual novel/courtroom adventure hybrid (out Feb. 11 exclusively for PlayStation Vita) is made abundantly clear from the prologue going forward. But does this explosion of absurdity have enough appeal to survive beyond the seriously intriguing hook?

A great set up for a solid routine 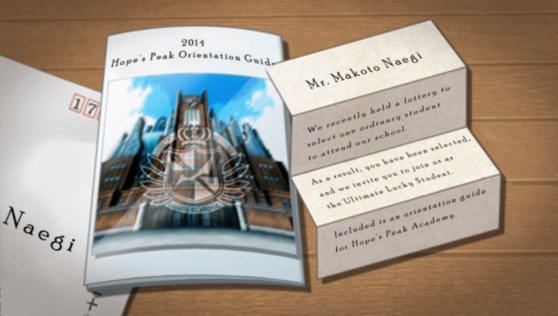 Above: Nothing ever goes wrong with a school that enrolls via lottery!

Makoto Naegi is the The Ultimate Lucky Student. Randomly selected to attend the prestigious Hope’s Peak Academy, the high schooler barely makes it into the lobby before fainting and awakening in a desperate nightmare. Trapped within the elite school with 15 other “Ultimate” students, Makoto must take part in a lethal game that allows for only one student to “graduate” — and only by getting away with murdering one of their peers. A mysterious entity oversees the game in question, and it interacts with the students through a remotely controlled teddy bear named Monokuma.

It’s a fantastic set up that plays out in a slow burn over six chapters, each running between two to three hours depending on your reading speed. Each chapter begins with exploring any new territory that opens up in the school, gliding a cursor over static backgrounds hunting for interactive objects to further the story or net the odd piece of in-game currency. The next few in-game days are divided into chunks of “Free Time” during which most characters become available for conversations and B-plot development. Inevitably, one of your classmates turns up dead — usually in horrific and oddly specific conditions — and you must begin an investigation with the rest of your peers, collecting all possible clues within the environment before presenting them at a class trial. Your routine hardily varies throughout the game, but it largely avoids redundancy through the strength of the dialogue between characters.

A cast of amiable stereotypes

While only one of the other students — each a leading mind in fields as varied as biker gangs to fan-fiction writing — branches out beyond their initial character archetype, the interplay between them is consistently amusing. A lot of blunt personalities are ramming into each other, but the rivalries and eccentricities are written with a sly flair for personality conflicts (and an abject loathing of the fourth wall). It recklessly satirizes — anime and physical fitness are just two of its targets — and this conversational humor plays well opposite the gruesome story arc. 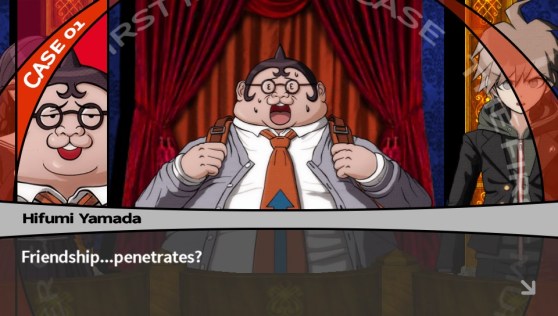 Above: Next time, on To Catch a Predator.

Nuance may not be a factor in this game of teenage homicide, but that won’t stop most of the deaths from hitting an emotional core. Watching the surviving characters react and form significantly different — and often diametrically opposed — strategies after each murder is Danganronpa’s central charm; especially when it comes soon so after the downright gleeful ways it shows off each esoteric death. The optional but encouraged personal time spent with each character grows into a game of Regifting Bingo, as giving the perfect gift (acquired through a magic prize bubble machine with in-game Monokuma coins) to the right person nets additional skills you can use in the courtroom scenes.

All surviving students adjourn to the courtroom once they complete an investigation and argue over the assembled evidence. Gamers have approached the bench before, primarily through the eyes of Phoenix Wright, but the prosecution process has never been quite as dynamic as it is in Trigger Happy Havoc. At Hope’s Peak Academy, you load evidence into a rhetorical gun as Truth Bullets, and must fire them at contradicting statements from your peers that fly across the screen.

More elements are gradually added to the courtroom with each chapter, but you’ll spend the majority of your time selecting the proper evidence to present and (literally) shooting down lines of logic that contract them. For what amounts to finding the right sentence fragment (highlighted orange against other white text) in a cycle of swiftly scrolling text scrawls, Danganronpa maintains an impressive amount of tension. Each segment is generously timed (at least on Normal difficulty), but it has only a brief window in which to fire at each possible contradiction before you have to start again at the beginning of each phase. 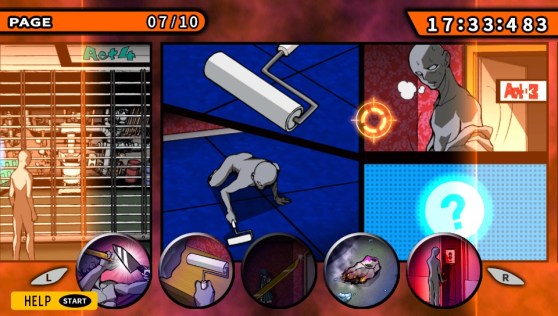 After all the pieces of each case have been presented, Makoto must place the events in chronological order by filling in the narrative gaps of a comic book-style retelling of each murder. Assembling the sequence of events correctly is usually the final step in determining the guilty, or “blackened,” student. Monokuma then drags away culprit for Punishment Time, enthralling and bizarre cutscenes that revel in cruel and unusual death penalties. These vignettes are the guiltiest of Trigger Happy Havoc’s many dark pleasures and the epitome of the game’s delightfully demented approach to death.