While everything before each class trial remains interesting through character interaction and plot contortions, Danganronpa’s case-solving mechanics only last a few chapters before growing tiresome. Each murder grows more bloated and complex, the 13 or so phases to each trial becoming a drain on any patience. The brain solves each component of a case within the first few seconds after a phase starts, but the process of finding the exact — and often vaguely worded — contradiction outlasts the thrill of discovery.

Be prepared to develop fidgeting habits as the same text flies across the screen for the fourth time. Mistakes come frequently in Trigger Happy Havoc, more often at the expense of erroneous gameplay obstacles than player error. Purple subtext that appears over contradictions are particularly aggravating, each one having to be tapped aside either by the Vita’s rear touchscreen or the tap of a face button before firing at the proper contradiction. 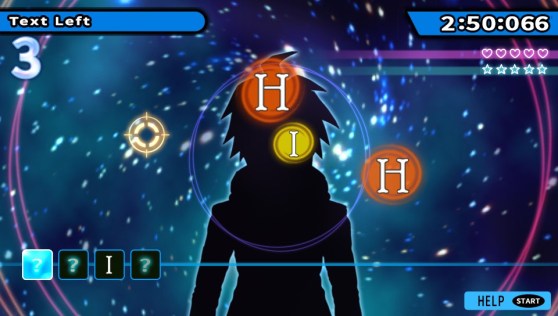 Above: Prepare for frequent bouts of screen-tapping.

New mechanics added in later chapters (presumably to combat this exact grind) feel more like busy work than natural gameplay extensions. Hunting for a series of letters to fill in a crucial word makes players effectively stop and solve a junior jumble in the middle of a trial. A final debate with guilty or stubborn characters will frequently play out in a rhythm-based minigame that is somehow equally complex and simple. I managed to beat each one of these “boss battles” by flailing about the controls with little idea of how I survived.

It’s hard to feel a sense of genuine accomplishment when solving a puzzle after each you’ve pretty much told where each piece goes. All too frequently in Danganronpa’s investigations, you are so strongly hinted toward the proper line of logic that when a decision finally becomes playable, you have rarely have more than few dots left to connect. You can predict most of the process for each murder before even entering the court room (the game’s attempts at drawing out red herrings is almost endearing in their ineffectiveness,) but as soon as Monokuma’s gavel starts each trial, it doesn’t seem to trust the player to piece things together.

When these sharp nudges come from other characters, it makes enough narrative sense; superior minds are helping Makoto “He’s Just Lucky to Be Here” Naegi-chan solve a murder. But when Makoto himself thinks up a hint just sort of flashing the solution onscreen, even Normal difficulty feels coddling. The game’s hardest difficulty (delightfully named “Mean”) is recommended for most players. 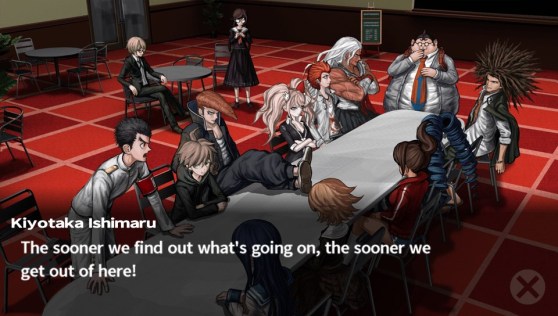 Above: We must out the identity of the Mastermind! But first, waffles!

This reduced feeling of agency extends to the less fatal portions of the game as well. A vast majority of the time, Makoto will outright tell you every room you need to visit in Hope’s Peak, and that’s with them all already highlighted on the map. After 13 in-game days of schmoozing with our fellow classmates, we don’t need to be told to head to the dining hall for our post-murder breakfast meeting. The game will also lock you in important rooms during homicide investigations, eliminating any chance of missing a piece of evidence, but dampening any opportunity to flex some detective muscles.

One might think then that Danganronpa is far too easy, with multiple characters practically telegraphing each piece of evidence and the complete impossibility of missing any detail at a crime scene. But several times during each class trial, players will be thrown for such a sudden loop that the only path to progression lies in some serious trial and error. Largely due to the odd translation choice, calls for evidence will be so hazily worded that players will just start picking out objects that only tangentially work with the line of questioning.

The worst offender in this case is the Climactic Inference graphic novel segments. Makoto must choose between two images so similar (like a closeup of a character entering a locker and a long shot of that same character exiting the locker from the same angle) and receives a penalty for having to flip a mental coin. These blips are too random for you to misinterpret as a rising difficulty curve (Trigger Happy Havoc’s challenge picks a level of challenge early on and sticks with it to the stagnant end) and have a habit of showing up just as players are on their last bit of health. 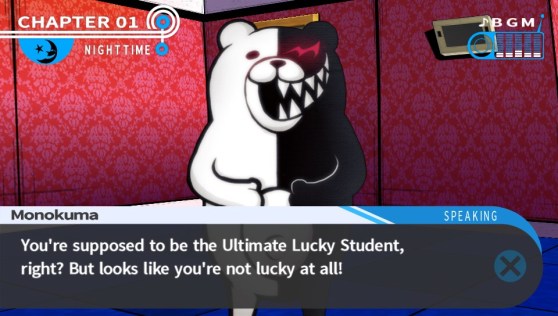 Above: Monokuma’s trying so hard to be evil that it’s impossible to hate the bear.

No one takes on a game of betrayal and murder with less comfortable absurdity than Danganronpa: Trigger Happy Havoc. Solving a homicide can be a lot of fun when it’s alongside an idiot clairvoyant, Lolita gambler, and psychotic robo-teddy bear (“Puhuhuhuhuhuhuhu!”). Countering contradictions with metaphorical lead is an amusing attempt to  giving a courtroom a more action-packed edge, and it’s a strong enough mechanic to survive some frivolously tacked-on gameplay extensions and hazy road bumps in the translation.

All patient lovers of nerd-dom and the lighter side of death are encouraged to apply to Hope’s Peak Academy. Just remember to pack some heat.

Danganronpa: Trigger Happy Havoc releases exclusively for the PlayStation Vita on Feb. 11th, 2014. The publisher provided GamesBeat with a pre-release physical copy of the game for the purpose of this review.