Updated at 11:20 a.m. Pacific: The Kickstarter is now live, the link has been added to the original text below.

Updated at 10:20 a.m. Pacific: We have been informed of a delay in the launch of Nevermind’s Kickstarter campaign. We will update this interview again once the link goes live.

Nevermind wants to help you manage your stress by scaring the hell out of you. And it just so happens to be launching a Kickstarter campaign to do it.

Evolving out of a proof-of-concept thesis at the University of South California’s graduate game design program, this horror-adventure game monitors players’ heart rate to exacerbate scares and — potentially — save lives. By monitoring biofeedback, or naturally occurring changes within the human body in reaction to physical or emotional stimuli, the game takes into account the rise and fall of the player’s heart rate and automatically alters the difficulty to compensate. Nevermind comes packaged with its own proprietary sensor to help players manage, or succumb, to their stress levels.

We sat down with Erin Reynolds, the creative director and mind behind Nevermind, to discuss the project as it becomes available on the crowdfunding website.

GamesBeat: What exactly is Nevermind, and how does it utilize biofeedback within gameplay?

Erin Reynolds: Nevermind is a biofeedback-enhanced horror adventure game. In it, you explore the dark and twisted landscape of a psychological trauma victim’s subconscious. Every twist and turn holds a disturbing clue explaining what happened to the victim. While you are being subjected to these terrors, the sensor is reading how scared and stressed you are. As you get anxious, the game will respond by becoming more difficult. The environment will dynamically react to your fear — impeding your progress and making the game all the more stressful.

Your only hope is to calm down and relax in the face of this fear. As soon as the game detects that you’re starting to regain control over your fear, it will return to its easier, default state. So on the one hand, Nevermind is a really fun and terrifying horror-adventure-mystery game. But the “big picture” idea behind it is to provide a way for you to practice stress management on the fly. If you can learn to become more mindful of your fear and anxiety responses in-game and master staying calm in the face of intense and stressful situations, you’ll be able to use those very same skills out in “the real world.” We know players will have a ton of fun playing Nevermind, but we also want them to leave the game confident and better equipped to handle those inevitable moment-to-moment stresses of every day life. 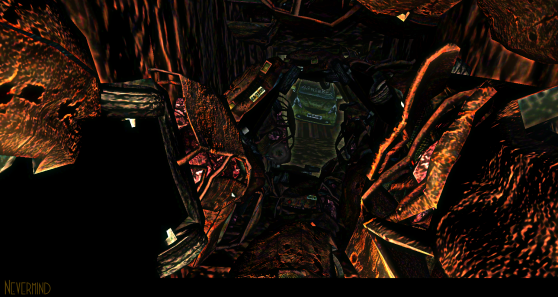 Above: Gaining control over your fear is the only way to survive in Nevermind.

GamesBeat: What lead to your decision to take this from your proof-of-concept thesis at USC into full-fledged development?

Reynolds: Nevermind started to take a life of its own after I graduated from USC and returned to mainstream game development. I watched momentum build and enthusiasm grow from the gaming community, media, games industry, and academic communities as Nevermind was featured in prestigious festivals and conferences. For me, it was incredibly exciting and encouraging to experience such an overwhelmingly positive response to this crazy dream project of mine. While Nevermind was always really where my heart was, I realized I wasn’t the only one who wanted to see its story fulfilled. So with the support and encouragement of the Nevermind fan community, my friends, and my family, I left my full-time job to dedicate myself completely to taking Nevermind from an academic proof-of-concept to a fully realized game.

GamesBeat: Was integrating player biofeedback always part of Nevermind’s design? How did you go about incorporating such clinical data into a game’s infrastructure?

Reynolds: The biofeedback component of Nevermind was there at the very beginning as a key part to the vision for the game. I had a taste of the potential of biofeedback in games on an earlier project I worked on two years prior to starting on Nevermind, and I was left smitten with the possibilities of integrating that technology into a fully fledged game. While I was fascinated by the technology and therapeutic potential, as a game designer, I had very little background in how sensor tech works and the psychological implications and possibilities behind it. I was fortunate enough to have incredible advisers and mentors throughout the project who pointed me to the right resources needed to get up to speed on the clinical and scientific aspects of the project. I spent the entire summer prior to starting development immersing myself in academic papers and research so I could implement an accurate and effective infrastructure that would have the intended impact on the player and game as a whole. 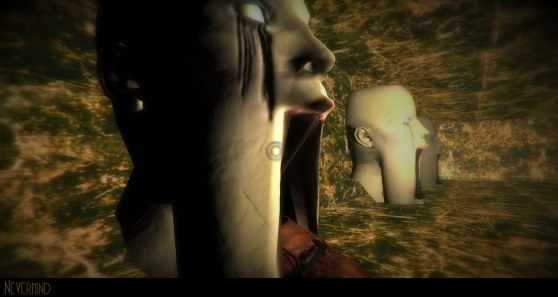 Above: This is how Nevermind does therapy.

GamesBeat: There seems to be a conscious effort to make Nevermind into a game with real problem-solving potential. What issues could people using a horror game study or solve with a heartrate monitor?

Reynolds: First and foremost, we want Nevermind to be a kick ass game in and of itself. But one of things I’m most excited about Nevermind is its potential to be a powerful tool in a therapeutic setting. I’m absolutely passionate about finding ways to create games that are both entertaining and giving players something positive back for their time invested. For Nevermind specifically, we’ve seen a lot of excitement around the potential for stress-management training. Personally, I feel many people play horror games or watch horror movies because they like to test the boundaries of their comfort zone, within a safe setting. Nevermind not only delivers on that, it provides measurable feedback to the player via biofeedback. With that information, the player can keep testing his or her boundaries and learn new techniques to grow stronger, braver and observe measurable improvement in doing so.

GamesBeat: What platforms have you planned for Nevermind? Do they include any support for third-party peripherals or accessories like the Oculus Rift?

Reynolds: We are so excited about where the Kickstarter will enable us to take Nevermind. While the game is currently PC only, we want to explore other platform possibilities such as the Oculus Rift and Xbox One — as well as expanding the number of sensor devices Nevermind will support.

GamesBeat: When can players expect to get their hands on Nevermind?

Reynolds: If we hit the goal of our upcoming Kickstarter, we plan on Nevermind to hit a release date of early to mid-2015.