Once again, Kik is doubling-down on the web as a way to empower its messaging apps.

Today, Kik is adding a simple new feature to its iPhone and Android apps that could lead to huge engagement gains: a built-in web browser.

Instead of hopping over to another browser app to do some research or browse your favorite sites, you can just swipe left on the Kik app and plug in a URL or search phrase. All the while, your existing Kik chats and its HTML5-powered Kik Cards are just a swipe away. Compared to juggling multiple apps on iOS and Android, Kik’s solution adds an almost desktop-like multitasking method to its app.

Like most companies, Kik wants you to stay in its app as long as possible (indeed, that seems to be one of the driving reasons for Facebook’s new Paper app). Adding a browser right within the app gives Kik’s more than 100 million users one less reason to step away from the app, and it also opens up potential new monetization possibilities.

“We don’t want to monetize [our] Messenger directly,” Kik founder and CEO Ted Livingston told me in an interview. “But if we can get a bunch of developers on-board, we can sell them a bunch of extra services… like promoted suggestions for web search.” 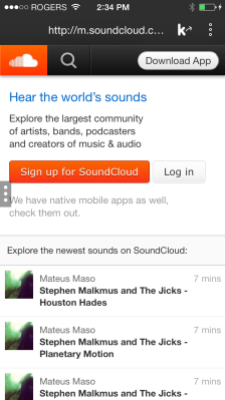 Above: Soundcloud’s mobile site in Kik

Kik has been working towards adding a built-in browser since it launched over three years ago, Livingston told me, but the company first had to solve the design dilemma of adding the bones of a browser into a mobile messenger. The first step towards a solution came in 2012, when Kik launched its HTML5-powered Cards, tiny web apps that let you access sites like YouTube and Reddit.

Those Cards, which have been installed more than 145 million times by Kik users, were the company’s first step towards keeping people inside its apps. Kik also added a menu that was easily accessible by a swipe from the left side of the screen, which made it easy for people to jump between the apps and their text chats. All Kik had to do next was add a URL/search bar to the top of the menu.

The company is also prioritizing websites that have been optimized for mobile devices, like Soundcloud and most major blogs. In particular, Kik will prioritize mobile sites that exist entirely on one page, have a small Kik script in their code, and whose developers have sent Kik some keywords about their site.

Livingston believes it’ll be easier to encourage developers to optimize their sites for mobile, rather than asking them to build custom Kik Cards — especially since the mobile tweaks will make their sites look better on every mobile browser.

Kik is based in Waterloo, Ontario, and has raised around $27.5 million so far from RRE Ventures, Spark Capital, Union Square Ventures, and others.