Robert Kingett is a gay game journalist. He’s also fully blind in one eye, suffers from cerebral palsy, and stutters. That can make life difficult, and gamers aren’t known as the most welcoming bunch.

But disabilities and prejudice haven’t stopped Kingett from playing games (he’s “weirdwriter” on PlayStation Network and “weirdwriter11” on Xbox Live) — or being an inspiration to others. He’s a motivational speaker, a critic, and an advocate for the lesbian, gay, bisexual, and transgender (LGBT) communities. He lives in Chicago, is involved with campaigns like the accessible Netflix project, describes himself as popular and versatile — “a Rubik’s Cube” — and sounds incredibly confident given his challenges.

We chatted with Kingett (through email because of his stutter) about what gaming is like through his eyes: What it’s like to be a “gaymer” with disadvantages, how his handicaps change how he interacts with games, what issues in the industry are important to him — and what developers are doing wrong — and most importantly, why perspectives such as his are so valuable to the larger discussion of games.

GamesBeat: Have you faced prejudice in gaming circles for being blind and a “gaymer” or for having a stutter? 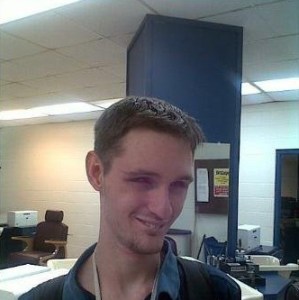 Robert Kingett: Oh, most definitely! Online gaming is the most unaccepting circle that I’ve ran into. If a disabled person is looking to meet someone new in gaming, they would have a really hard time doing it. The online video game world is the most unfriendly place I have ever seen for the disabled or gaymers in general. If you meet gamers away from the microphone, though — that’s different. In online lobbies and stuff, there’s so much hate and mockery that it’s just disgusting. I’ve been called faggot, retarded because I stutter, and a few curse words that I have never even heard of before — all grammatically incorrect, I might add.

People call me retarded and faggot on PlayStation Network and Xbox Live, but at the end of the day, I’m still holding a controller, so I hope they know that this “crippled faggot” is going to turn on his console in a few hours. That should tell everyone else something as well.

A lot of people just want to be cool and be a bad ass inside of a lobby, but when it comes down to it, they are the lowest form of gamers I have ever seen. I bet you half the people who tease and mock don’t even know what the word “tough” is in a dictionary. It’s a huge power play or a ploy to be on YouTube. Those kinds of people are not gamers, in my opinion. I wouldn’t even consider them gamers at all.

In my opinion, a gamer is someone who loves gaming, and that includes other players. Love gamers — love them enough to congratulate them, give them a healing potion, or even lend their gaming wisdom and guidance and unwavering support. A gamer should be accepting of anyone who loves to test their wits on any video game even if it’s a genre they don’t like.

I’ve seen so much gay gamer hatred on YouTube, and I don’t understand why people waste their time dealing with people dumber than idiots. There’s a block button or mute button for a reason. We gamers are not like that. We’re gamers. We’re better than whatever they are.

GamesBeat: How did you get into gaming? What was your gateway game?

Kingett: It was Jeopardy for DOS — with a real floppy disc! I started playing that when I was 4 years old, and I would actually use it against my grandmother and grandfather to try to show that school wasn’t teaching me anything because, if it did, then I would have gotten a higher score, so I should stay home.

Needless to say, that didn’t work.

As I grew older, I wanted to try new games and new gaming systems. I liked comparing the different types of games I had, and I loved pushing the limits of whatever game I was playing. I wanted to see if the developers of these games could outwit me. Some did, some didn’t, and I beat the games — even though it took me a bit longer than [it would] a fully sighted person.

Soon, though, after I was 6, my grandparents died, and video games became a way for me to find a happy place in my life. My mother, whom I moved in with, was an alcoholic, and she abused me — physically, verbally, and mentally. When I didn’t have any new audiobooks to listen to, or my audiobook player was charging, I found a kind of solace in video games that books couldn’t give me. Don’t get me wrong — I love reading, sometimes more so than gaming — but back then video games were proof that I wasn’t stupid or that I wasn’t just some “lazy fucker.” 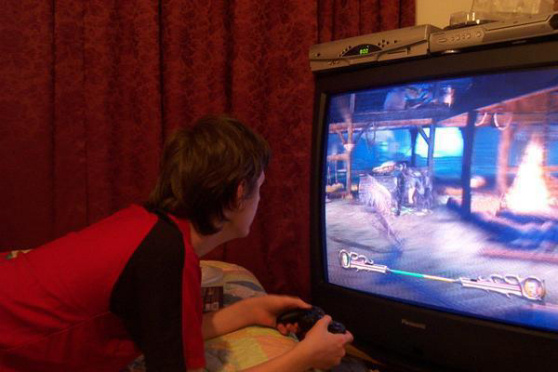 Above: Kingett playing a video game.

My mom would get drunk often, and she would hit me — regardless of my cries and pain. She would say all kinds of things to me such as, “you’re lazy, “you’re retarded,” or “you can’t even tie your shoes!” Of course, she would hit me, and I would wail late into the night. If it were not for games, I might have believed her. Video games became proof that I wasn’t stupid and that I could do something. Every system I’d learn, every button scheme I’d learn, every secret I found, and every boss battle I beat, that proved that she was wrong.

I didn’t have the math skills anybody else had, but I managed to get the golden keyblade in Kingdom Hearts. I was going to be someone, and I wasn’t lazy because the fact that I did all those things proved that I had the will and determination to do things, and I could use resources better than she thought I could.

Books and writing were ways for me to leave my house and vent on paper about what was happening at home, but video games were proof that constantly told me that she was wrong about me and always would be wrong when she said those kinds of things.

GamesBeat: How does your disability impair your ability to play games? How is the way you interact with games different from the experience the average person would have?

Kingett: My disabilities are a bigger barrier to gaming than most notice, but I just find ways to overcome them. I have tunnel vision in my good eye, so it’s as if I’m looking through a toilet paper roll all the time. That’s why games like Grand Theft Auto V are really hard for me because they have disabled the audible GPS. If I look straight on at the road, the map is out of my tunnel, so I can’t see the map, and I’d end up going in the wrong direction. If I look at the map, the road is not in my tunnel so, say, if I’m playing online on GTA V, I may run someone over and not mean to, and then they kick me from the game. The Xbox Live party system is a great accessibility help because I can drive and my friend can look at the map for me and give me turn-by-turn directions.

Reading text is a huge issue, so I have someone in my party read whatever I can’t — if they have the time. 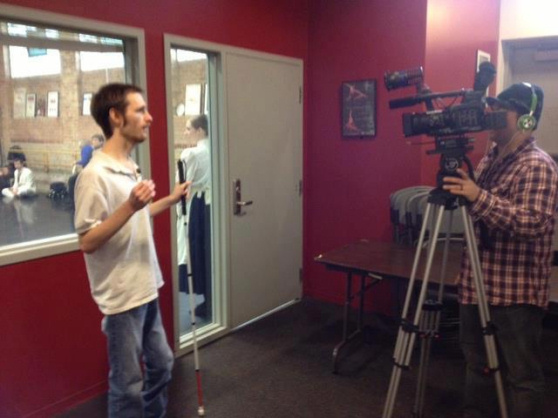 Above: Kingett is a motivational speaker and activist.

As far as the cerebral palsy, I have it on my left side, so I don’t have good use of all fingers on that side. This is a hindrance if there are quick-time events. I also can’t tap buttons very fast either, so I just can’t beat that part of a game if I have to tap a button really fast.

I can’t do any motion sensor or voice commands because I stutter, and I have to sit close to a TV in order to see it. I wear huge surround sound headphones to help me with various environmental aspects of games and other things.

GamesBeat: Is there any game system that’s more user-friendly to disabled gamers?

Kingett: With the new generation, I can’t comment on that much because I haven’t used one firsthand — though I hope I will get to try a PlayStation 4 and Xbox One and the next Nintendo console before this generation dies out completely — the generation of the PS4 and the like.

I have an Xbox 360, and I just got a PS3 for Christmas, so I’m definitely catching up with the times. At times, the Xbox is harder to see than the PS3. The PS3 has an easy kind of menu system that’s central, so my tunnel doesn’t have to jump all around the screen, but the 360 has sound effects that I can use as landmarks for navigation, so it’s a tie between the systems. For me, they are equal. I have never used a Wii U, so I don’t know if it’s accessible to disabled gamers. Articles can’t tell you everything.

As far as the PS4 and Xbox One, as I have said, I don’t have them but want to have them. The PS4 has something that’s an accessibility gateway, and that’s their sharing capability, where players can watch other players play and even help them out. I don’t have to worry about party chat anymore. I can just tell my friend, “I’ll show you,” and I’ll just hit a button even if he isn’t playing the same game as me. That’s something that’s really exciting me.