Nintendo is showing off 23 games for the 3DS and Wii U today. They will be available via digital download in the coming months from Nintendo’s eShop store.

This includes eight games for the 3DS and 15 for the Wii U. Of those, eight were playable at a recent preview event that I attended. Those that caught my attention in the short time I was there were Shovel Knight, Wooden Sen’Sey, Siesta Fiesta, and Moon Chronicles.

Wooden Sen’Sey [above] is an action-platformer game for the Wii U. It is set in medieval Japan with cute wood block-style characters and 2D landscapes that may remind you of something like Kung Fu Panda in two dimensions. Upper Byte Studio created it, and Neko Entertainment is publishing it. Wooden Sen’Sey is a side-scrolling action platform title where you play Goro, a village chief who is out for revenge. He can jump in the air, attack in either direction, and use axes to slice and dice, squash, or grapple.

The game has nine levels with original music and gameplay that isn’t easy to master. You can throw your axes on the ground and perform a double jump while doing a lot of damage to those below you. You can throw shurikens and bombs. It has a nice feel to it. You have to be careful to jump and smash enemies from above or time your attacks to the side. It’s easy to die, but you respawn at a nearby save point and dive back into the action.

Wooden Sen’Sey is built with Unity and looks beautiful. The controls are easy. The title is already available on Steam on the PC. 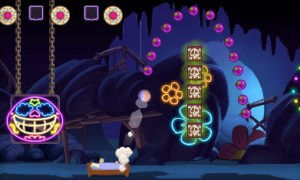 Siesta Fiesta is a 3DS game coming in March on the eShop. Mojo Bones built it, and it takes its gameplay from the old Breakout arcade game. You play a character named Siesta, a sleepy guy who lies on a bed. When he bounces off the bed, he becomes a ball like the ball in the Breakout game. He bounces off objects and then comes back down. The bed is like a paddle, and you have to catch Siesta before he falls to the ground and then send him back into the sky.

It combines classic arcade game play with cool objects such as piñata blocks, power-ups, and wacky contraptions. The challenge is when Siesta bounces off objects like pinball bumpers, which send him off in unpredictable directions.

Siesta Fiesta has 55 levels, eight major regions, and eight bosses. It could be fun for kids, but old timers who loved Breakout may like it, too. It adds variety with three game modes. You can bounce Siesta on the bed, fire him with a Party Cannon, or try for medals in time trials. Siesta Fiesta teaches you a little about physics and keep you on your toes. 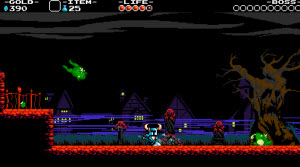 Shovel Knight from Yacht Club Games is coming to the Wii U and 3DS on March 31. It is a two-dimensional platform game built with a nostalgic 8-bit graphics style. Your goal is to use your shovel to bang the heads of enemies and defeat the evil Enchantress so you can save your beloved.

The ShovelBlade is a multipurpose weapon that you wield like a sword or spear. You can use it to dig for treasure, which is a fairly therapeutic activity. And you can smash foes known as The Order of No Quarter. It has a sense of humor, difficult levels where you have to jump to avoid enemies and deadly pits, and tough bosses. It has effects that you won’t find in old Nintendo games, such as multilayered parallax, where the background can move at a different speed as you scroll sideways in the foreground. With the Wii U, you can play off the TV on the gamepad. 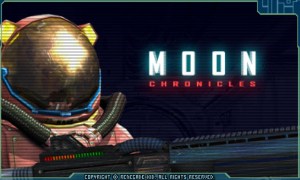 Moon Chronicles is a 3DS title coming to the eShop in March or April. It is a first-person shooter game with high-end 3D graphics — or at least as high end as the 3DS can play. Built by developer Renegade Kid, the game takes you to the moon on a mission to investigate unknown alien activity. You explore a space station to unravel the mystery and blast aliens. The twist in gameplay comes from a small robot drone that you control. It helps you get around locked doors and uncover possible ambushes.

The first episode in a series is called One Small Step, where you search for lost team members. There’s a bonus VR training mission, and future episodes 2, 3, and 4 will be available at a later date. The game moves fast at 60 frames per second and it’s a true first-person shooter. But the graphics are cartoon-style because the processing power on the device isn’t that strong. It makes a brave attempt to do full 3D on a the 3DS, with real-time specular lighting, detailed geometry models, shadow maps, texture filtering, and mipmaps. You can also play the game in 3D, but not with full-screen anti-aliasing, which smooths jagged edges. But in the larger universe of iPad games and other devices, the title isn’t that impressive.

Other 3DS games include Edge from Two Tribes Publishing; Jett Rocket II: the Wrath of Taikai from Shin’en Multimedia; Treasurenauts from Renegade Kid; Retro City Rampage from Vblank Entertainment; and Shantae and the Pirate’s Curse from WayForward;

Squids Odyssey from The Game Bakers is coming to both the 3DS and the Wii U.