LAS VEGAS — The luminaries of the video game industry are gathered at the Dice Summit, the video game conference in Vegas this week. This morning, we heard a bunch of talks from some of them, and we’ve summarized the best moments so far below.

Hilmar Veigar Petursson, chief executive of CCP Games, opened the conference talking about how his company wants to make virtual life more meaningful than real life. The maker of the massively multiplayer online game Eve Online, a sci-fi universe which has its own virtual economy, believes it can do so through emergence, or the rise of player-controlled game inventions that change the game experience for everyone else.

A decade ago, CCP launched the virtual game world with bugs that players exploited. Rather than fix them, CCP rolled with it and let the world evolve through player-created content. In 2011, CCP faced a revolt when it tried to sell virtual items through microtransactions. CCP let the players have their way. The developer is also chronicling their accomplishments and stories in comic books.

These player-created stories have culminated in giant space battles, like one on Jan. 28 that consumed the equivalent of $300,000 in damage on virtual goods. In that space battle, players destroyed giant spaceships that they had spent enormous amounts of time and in-game money creating. But the players don’t mind. Their engagement is growing, and so is interest in the subscription-based game.

And some of the players are even getting more attention than Veigar Petursson. One player is even aspiring to become as muscle-bound as his own game character. 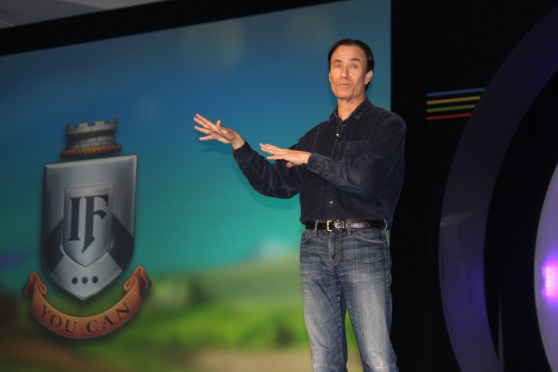 Above: EA founder Trip Hawkins of If You Can.

Trip Hawkins, the founder of Electronic Arts and chief of the new startup If You Can, asked, “Do you ever feel like what we’re really inventing is a lot like pornography. I get the feeling that the public, teachers, think that we’re a social ill. And we kind of are.”

He noted how games are addictive and are monopolizing the attention of kids. He is making a game, dubbed If, that aims to teach social and emotional intelligence — such as being able to stand up against bullies and express feelings properly — to young school children through games. It’s an attempt to teach game developers “what we can do to stop being viewed as a social ill.”

He predicted that game developers will figure out how to make money on mobile, turning that process from luck or art to a science. When that happens, he believes the game industry will top $100 billion a year in revenues. 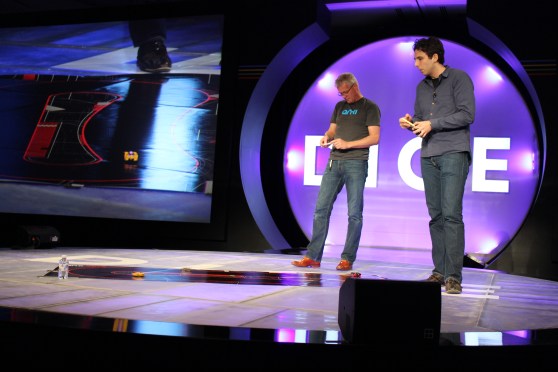 Above: Boris Sofman of Anki.

Boris Sofman of the startup Anki shared that cool technologies such as artificial intelligence were “trapped in government labs.” So his team took A.I. and over seven years built its consumer technology, a racing game called Anki Drive, that uses what he learned while getting a doctorate in computer science. His team has created the Anki platform with A.I. that can bring virtual characters, even race cars, to life as semi-intelligent beings.

“How would you use this technology to bring characters to life?” Sofman asked of game developers. 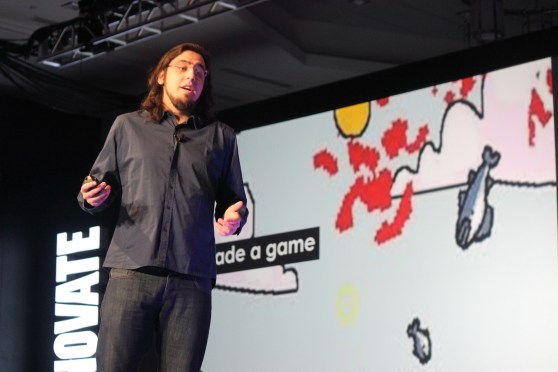 Cofounder Rami Ismail of Vlambeer, a small Dutch indie studio that created the smash hit Ridiculous Fishing on iOS, continued his campaign against the cloning of games. But he also praised tool creators who are making game design easier.

He said that he and Jan Willem Nijman dropped out of school and started creating games. They founded their studio Vlambeer in 2010 and made a few games using Flash tools. They created Crates From Hell, a prototype, and published it in May 2010 as Super Crate Box. They then created Radical Fishing and Serious Sam: The Random Encounter.

Then something bad happened, Ismail said. Someone cloned Radical Fishing on iOS before Vlambeer could release its own version of the game on it. The company stopped development and then campaigned against game cloners.

And then they resumed development of the iOS version and released Ridiculous Fishing in March 2013. That became a smash hit and one of the most critically acclaimed games of 2013. (We included it on our list of the top 10 games of the year).

“It’s a great story,” Ismail said. “Two guys drop out of school. They go through ups and downs. It could be a movie with a cheesy soundtrack.”

But he said his games and the whole democratization of game design wouldn’t be possible without the release of inexpensive game tools that make it simple for people to bring their creative visions to market. One of the things he contributed back was making a press kit package, dopresskit.com, available to other indie developers to use 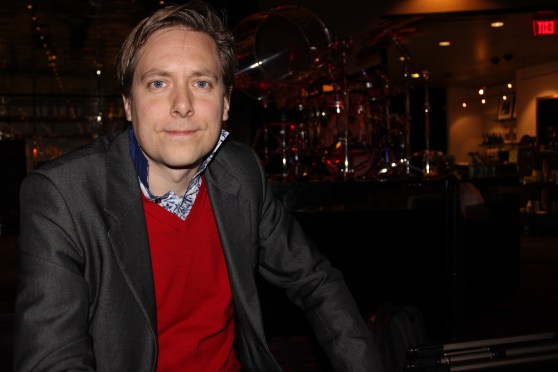 Above: David Helgason of Unity.

David Helgason, the chief executive of Unity Technologies, said in an interview with GamesBeat that his company is making progress in its goal of democratizing game development through its Unity 3D game engine.

Around 500,000 developers use the engine every month, and at least 20,000 Unity games are on the market. Those games are being installed more than 15 million times a day on Android, iOS, and the desktop PC. Roughly 9.1 percent of the Google Chrome base uses Unity at least once a month.

The Unity Asset Store also has 11,000 items. It has virtual items that developers can purchase and use in their games. One popular item is a first-person shooter camera module. That might take three days for a good programmer to make.

That item has been sold 5,000 times. By itself, it has saved developers about 57 years of development time. And Helgason estimates that Unity developers have collectively shaved off $1 billion in costs of developing their games by using the Unity App Store.

“That’s collaborative economics,” he said. “We want to democratize game development. And that movement is gaining momentum.”