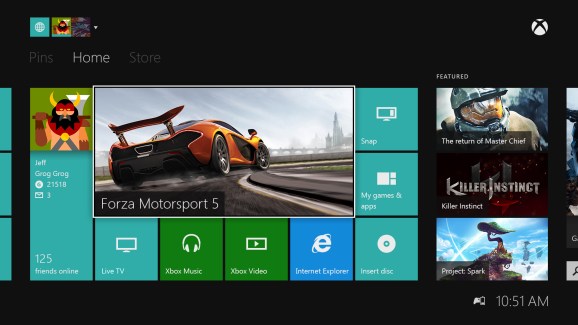 Look for the new controller battery indicator on the bottom right.

That Xbox One is a canvas, and Microsoft is planning to add a new coat of paint with a pair of incoming updates.

Next week, the Xbox One will get its first major patch since its launch. Microsoft will release the update on Feb. 11. The download will include improvements to Xbox One’s developer back end, it will add new features, and it will improve stability. Then, on March 4, Microsoft will release a second update that will improve the console’s party and multiplayer capabilities.

As for the specific things you can expect in the first update, Microsoft provided a few details. The patch will enable Xbox One owners to see and manage the storage space on the console. Currently, gamers have to install every game they play to the system’s 500GB hard drive, and the user interface has no option to control what gets deleted when the drive is full. The new features will also enable gamers to manage the install lineup of games and apps, so players don’t have to wait for Netflix to finish installing before installing an update to a frequently played game.

The first update will also include a new icon that indicates how much power your controller has. You can see in the header image at the top of this page the tiny emblem on the bottom right that shows how much juice the joypad has.

The Feb. 11 update will also include USB keyboard support. This will make navigating the web easier using Xbox One’s included Internet Explorer browser, but it won’t work with games.

Microsoft says the February patch will include even more, but it did not provide any more information.

It told us even less about the March 4 update. We know it will improve Xbox One’s party and multiplayer functionality, but we don’t know how. Currently, gamers on the latest Microsoft home console often report difficulties connecting with their friends and issues when moving from one game to another.

Microsoft specifically said that it is timing these upgrades to go through a week before Electronic Arts launches Titanfall, which is the first big Xbox One game of the year.

Titanfall is an online shooter from Respawn Entertainment, which is made up of former Call of Duty developers. It has on-foot soldiers facing off against players in giant mechanized robots, and it is highly anticipated.

Finally, if you are wondering when Twitch livestreaming is coming to Xbox One, so are we. Microsoft said nothing on the subject when we asked about it.