Metal Gear Solid publisher Konami is not living up to its own expectations.

The Japanese company reported its financial results for the third quarter of its fiscal year. It revealed that it generated $7.4 million in operating income, which is down 50 percent year-over-year from $14.9 million. Likewise, Konami’s revenues were down from $160.2 million in Q3 fiscal 2013 to $155.9 million last quarter. This has led the publisher to revise its operating-income guidance for fiscal 2014, which ends March 31, down from $267 million to just $98.7 million.

A huge bulk of the shortcoming is due to Konami’s game-publishing business. Where after Q2 the company expected its games to bring in $111 million in revenue, it is cutting that guidance down to $98.3 million. The publisher is slicing off another $117 million from its revenue guidance thanks to sluggish performance of its health and pachinko slots divisions.

The only wing of Konami’s business that is performing better than expected is its casino gaming sector, which it still expects to generate around $281 million in revenues. 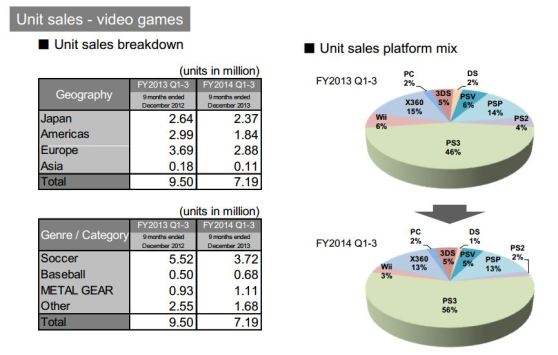 Konami’s troubles apparently stem from two main issues. First, it generates most of its revenues from the PlayStation 3, but software sales slowed down more than expected on that console (and the Xbox 360) last quarter. This was especially noticeable in the States. Through the first nine months of its fiscal 2013, Konami sold 2.99 million copies of its games in the U.S. Through the same period of 2014, it only sold 1.84 million.

The other issue is that Konami’s Pro Evolution Soccer franchise continues to lose the battle to Electronic Arts‘ FIFA. Again, through Q3 of fiscal 2013, Konami sold 5.52 million copies of its soccer titles. In 2014, its only sold 3.72 million. To illustrate how important PES is to Konami, the aforementioned baseball game that it cited as a positive only sold 680,000 copies in the same period.