As the former global chief technology officer for Citigroup, Yobie Benjamin virtually lived on airplanes. On international flights, he would frequently see passengers struggling to listen to movies by plugging headsets into an iPad. 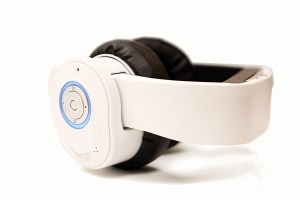 Above: A Glyph prototype

Benjamin would later quit Citigroup (with aplomb, on stage at a wearables conference) to join an early-stage startup called Avegant. The team of engineers is building a new headset, the “Glyph,” which projects moving images directly into your eyeballs. According to VentureBeat’s Dean Takahashi, it gives you the experience of watching an 80-inch TV.

While at Citigroup, Benjamin was an active angel investor. He could have invested in the company or taken an advisory role. But the team made the decision to go all in and raise funding on Kickstarter. Benjamin describes that as one of the more “terrifying” moments in his career, but Glyph struck a chord with backers. Just halfway into the campaign, the team has surpassed its $1 million funding goal, making it one of the most successful hardware products in Kickstarter’s history.

Mere minutes after the campaign reached the $1 million milestone, I caught up with Benjamin at the InContext conference in San Francisco to find out how he did it.

VentureBeat: Congratulations on crossing the $1 million threshold. Did you study other successful Kickstarter campaigns before launching your own?

Yobie Benjamin: Yes, we did lots of research before we attempted our own campaign. We looked closely at Pebble and Ouya [and] all the other million dollar campaigns. The biggest realization is that they were all interesting products, which were fundamentally new and novel. The first rule of Kickstarter is to have a product that is actually breaking ground. You’re going out on a limb and asking people to believe in your idea.

VentureBeat: If you fail at Kickstarter, is that a sign that your product isn’t resonating with consumers?

Benjamin: Not necessarily. But I do think that if you do not succeed, the bar for success is even higher for you. You have bared your soul to the world in a way. And it’s not a great sign if you can’t convince the group of people who are already predisposed to funding novel ideas.

VentureBeat: You debuted at the Consumer Electronics Show and won the editors’ best in show award. Would your Kickstarter have been so successful if you had stayed under the radar at CES?

Benjamin: Definitely not. Winning at CES elevated our profile in the press. We were interviewed by Time Magazine and by virtually every tech blog. The international press reached out to us too. They announced it on Thursday evening [at CES], and by the following morning everyone knew who were were. Execs from Bose, Audio-Technica — all the big headphone guys — were also in line.

VentureBeat: After CES it must have seemed like a good bet. But what initially prompted you to quit such a high-profile job and join this early-stage team?

Benjamin: I was traveling so much that I was a Diamond on Delta and United’s [top secret] Global Services club. In fact, I was in the top clubs for top fliers in almost every airline. I realized that something wrong was happening. I wasn’t spending enough time with my family and friends. I wasn’t sleeping nearly enough due to all the time zone changes. It was really the travel that killed me. Having two secretaries sounds cool. But all that means is that someone is doing nothing but your travel schedule for a full eight hours a day.

My roots are in engineering, software, and invention. So when I saw this product, I said: ‘Yes, let’s do this.’ And now, we are writing software, redesigning hardware, and showing it to people to gain the satisfaction of them smiling.

VentureBeat: You were in a position to retire. Why join a young startup?

Benjamin: The personal satisfaction of being part of a team that is building something nobody has done before, seen before, or even conceived of. It’s that process of creation. I have a dear friend called Steve Kirsch who sold his company Infoseek to Disney in the dotcom era. You’d think he would retire, but he’s doing startup after startup. I’m a bit like that. Inventing and building things is in my DNA.

VentureBeat: Still, it was always a risk. Would you have been mortified if you’d publicly resigned and the Kickstarter hadn’t succeeded?

Benjamin: I’m not going to hide the terror that I felt when we agreed to raise funds on Kickstarter. Collectively the founding team said: ‘We’re going to do this, and if it fails, that changes everything.’ It required a series of confidence-building exercises.

VentureBeat: What kind of confidence-building?

Benjamin: We showed our friends the product when it was an early prototype. We also reached out to journalists who see devices and products all day, including your own Dean Takahashi. People in the know, like Dean, told us it was cool. After that, Texas Instruments (one of Avegant’s suppliers) agreed to give us a pedestal — literally a tiny pedestal — at CES. Thank god for that because we were selected by a few different publications as one of the technologies to watch out for in 2014. That was another confidence-builder. Lines of people were walking over to talk to us at our booth. People couldn’t believe that the technology doesn’t have screens.

VentureBeat: What advice do you have for fellow hardware entrepreneurs who plan to raise money on Kickstarter or Indiegogo?

Benjamin: You have to believe in yourself and every person on your team. We were only eight people. There is no one on our team who is not an engineer. You have to believe that your product is the best — and knowing that, get ready to be subjected to the praise or ridicule of the public. Listen to this feedback. You have to be courageous but also realistic.

On a more practical note, manufacturing is our strong suit, which isn’t the case for most hardware startups. We actually have people on our team who have done manufacturing in large quantities. One of our lead engineers was one of the leads for Google Chromebook. He understands the complexities, like the relative distance and current supplies of all of our suppliers. You will only know the nuances of the supply chain if you’re experienced.

This is so important because the product needs to be both pretty and smart. You are asking people to fork over some $500 of their hard-earned money. That product better work. It better not fail. If someone returns the product, your margins will be killed. If you want to make sure that product stays with your customer, you better have superior manufacturing capabilities. If you are two guys or gals in a garage, that won’t be an easy road for you.

VentureBeat: What if you are just two guys in a garage who can’t afford a top engineer from Chromebook?

Benjamin: There are hardware accelerators that claim to help you with the supply chain and manufacturing. I wouldn’t advise that necessarily. I would either get the experience yourself or work really hard to recruit that person to your team. At the very least, make sure you have an advisor on your board who has that knowledge. Also, don’t forget that you’ll need to hire someone who understands customer service. You don’t want a perfectly good product being returned because no one asked, ‘Did you remember to plug it in?’

Check out the video below to see the Glyph in action.