These days, finding someone to play games with is easy. All you have to do is sign in — to Steam, to the PlayStation Network, to Xbox Live.

And while some of us prefer the anonymity of our Internet connections and others are hungry for more competition than our friends’ schedules can handle, playing online is just, well, convenient. In a matter of minutes, we can find teammates or opponents from all over the world. Why play with the same old people?

Not all developers have given up on local or “couch” multiplayer, though. Recent games like Tiny Brains, Towerfall, and Samurai Gunn are bringing it back. We spoke with the creators of these titles and more about why we should care about local multiplayer today. (Two quick reasons? E-sports and Super Smash Bros.)

Simon Darveau and Malik Bouhkira of Spearhead Games didn’t think about the cost of extra controllers or other barriers when they added local multiplayer to Tiny Brains, an action-puzzler that released this winter for PlayStation 4, PlayStation 3, and PC. They just focused on the kind of game they wanted to make.

“We wanted to make this true synergistic experience where everyone feels like they’re working together as a team,” Darveau told GamesBeat. 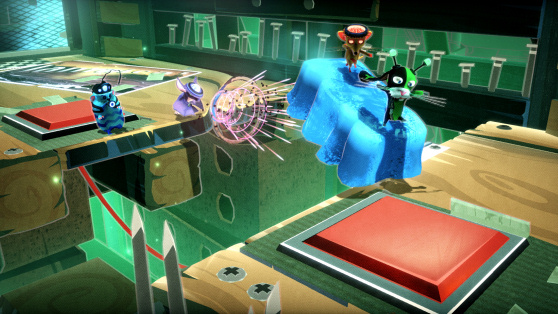 Tiny Brains was a big design challenge: Adding or removing one, two, or three players meant the complexity of the puzzles had to change to accommodate them — sometimes on the fly. But Spearhead wanted a game where players would talk to each other to find solutions. Face-to-face social interaction was key.

Bouhkira said the goal was to make sure Tiny Brains had enough universal appeal that it was “deep enough for a hardcore gamer yet accessible and simple enough that someone who is not totally used to gaming can still enjoy the game with his friends” — over a good meal or while having meaningful discussions. That’s much more interactive than watching a movie and staring at a static screen, he said.

Including online multiplayer as an alternative in Tiny Brains was “tons and tons of work,” Darveau said, especially for an indie studio that had more design power than technical know-how. That was a challenge that Juicy Beast, the studio behind Knightmare Tower, also faced when it created Toto Temple during last year’s Toronto Game Jam. Now the 2D platformer — redubbed Toto Temple Deluxe, where players grab and hold on to a goat for as long as possible or try to knock it out of their opponent’s hands — is coming exclusively to the Ouya Android microconsole as a full release this spring.

“The game would play itself pretty much the same way [if it had] online multiplayer, but it’s much more complicated to develop, not to say nearly impossible, during a game jam,” said Yowan Langlais, a cofounder of Juicy Beast. 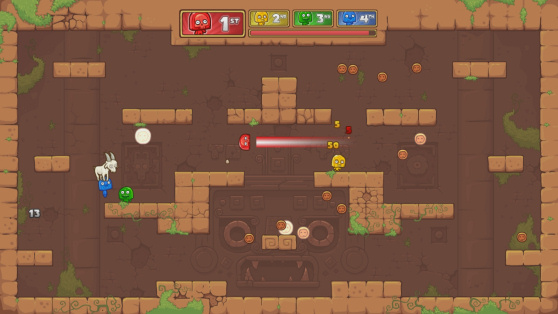 Above: The original Toto Temple local multiplayer game, made for PC during the 2013 Toronto Game Jam.

“We also prefer the social side of local multiplayer,” he said. “It makes you react to how others play the game; it also makes you exclaim yourself and laugh. We really think the mood and ambiance while playing a local multiplayer game is much more memorable. This is probably the reason why players gather under the same roof to participate to all those e-sports events even if they can be played online.”

Local multiplayer was simpler to include for another reason as well: “It’s a bit easier to develop a couple of characters with no real intelligence — [who are] player-controlled — compared to developing a bunch of intelligent enemies or various level designs with prescripted events and so on,” said Langlais.

For small, up-and-coming developers without a lot of time or resources, local multiplayer is a great solution. It helps build communities. “Some multiplayer games like Smash Bros. probably wouldn’t have become so popular without local multiplayer,” said Langlais.

The social atmosphere is friendlier — and great for adults

Too often, the way we treat other players through a network like PSN or Xbox Live is the same way we tend to talk to them on the Web. We’re not all that nice.

“Online players also just treat each other differently,” said Matt Thorson, the creator of Towerfall, the archery-arena game that started on Ouya and is coming to PlayStation 4 and PC this year. Back in July, Thorson told us that online multiplayer wasn’t likely for Towerfall. 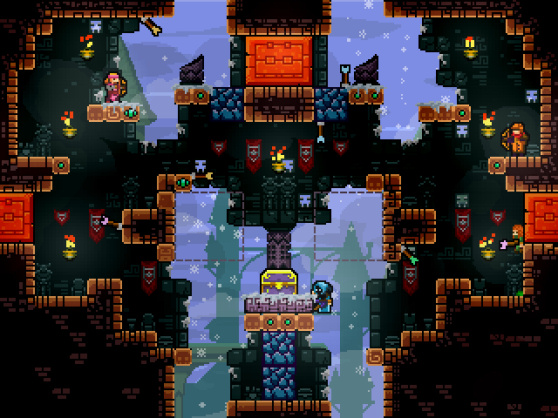 Above: Towerfall, a local multiplayer game for Ouya and soon PS4 and PC.

“Video games are just a part of normal social interaction for me,” he said. “… So it felt natural to design a game centered around same-room social play and spectating. We’re people who grew up forming friendships around GoldenEye and Smash Bros. Now we’re hosting parties as adults, and we want something to play.”

Towerfall was always about bringing people together, he said. “That’s what TowerFall is best at — how it adds value to peoples’ lives. So it doesn’t really make sense to force it into another model for business reasons.”

Teknopants, a developer devoted to crafting local multiplayer experiences, created PC Bushido brawler Samurai Gunn (headed to PS4 and PS Vita this year) for many of the same reasons.

“The reason Samurai Gunn is a local multiplayer game is because it was created at a party, and I can’t really picture it in any other setting,” said Teknopants founder and designer Beau Blyth. “I’m glad to have had friends around to help test it right from the beginning — I think it’s a major reason why the game is so accessible. To then change the design to something impersonal, distant, and exclusive seems to go against what brought the game into existence.” 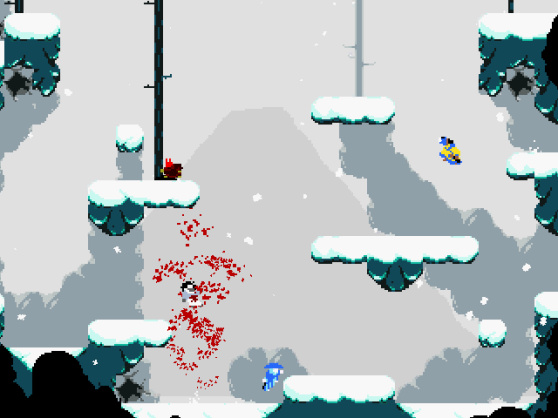 People seem faceless and expendable online, said Blyth. “When you’re playing a game with someone in the same room, the social space becomes just as important as the game. Besides, it’s a lot harder to be a jerk when you’ve got to look somebody in the eye.”

Our understanding of “social” these days has a much different meaning because of platforms like Facebook and Twitter. “People sometimes forget that real personal connections happen face-to-face, not via social networks,” said Aron Cender. He’s the marketing manager for Bloober Team, which is developing a maze-based action game called Basement Crawl for PlayStation 4.

Cender feels that a combination of both local and online multiplayer, like in Basement Crawl, is the best solution for everybody, but that’s not right for every game — and neither is couch play, he admits.

“All of the sandbox titles and open-world games make it a bit hard to include couch multiplayer,” he said. “First-person shooters are often so graphically intense that splitting the screen becomes a really unwelcome compromise.” 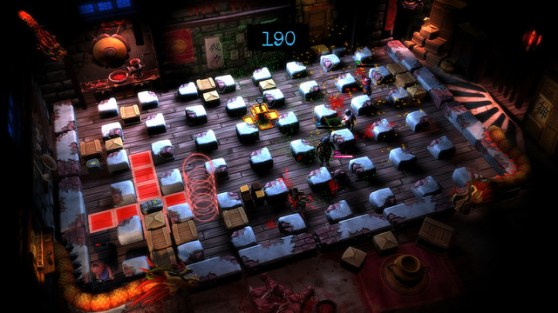 Above: Basement Crawl for PS4 features both local and online multiplayer. “The best of both worlds,” said Bloober Team’s Aron Cender.

Not everyone has the opportunity to invite friends over for a multiplayer session, either. That’s why Bloober spent so much time making sure both experiences — online and off — would make for great competition. The team found an advantage to focusing on the local play first, though.

“For Basement Crawl, we spent a long time making sure that sitting on a couch playing this game was going to be a superior experience, that it would be exciting and competitive and that you’d want to get better so you could beat your friends,” said Cender.

“Once we accomplished that, we knew that there was no reason that our great experience wouldn’t translate into an amazing online game as well.”

“Local multiplayer is where real rivalries are born and where the most intense competition lies.”