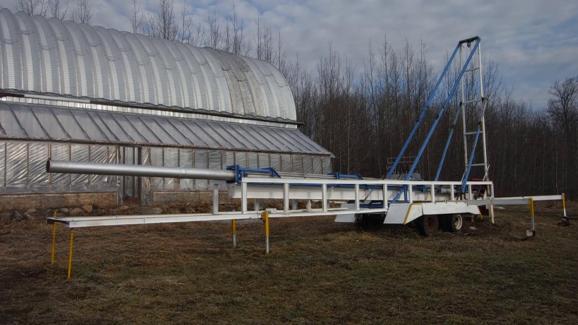 Sending objects into space doesn’t always have to be an expensive and complex task conducted exclusively by filthy rich entrepreneurs or governments. Sometimes all you need is a determined Canadian engineer, a backyard, and a Kickstarter campaign —  at least that’s what Richard Graf is hoping.

Graf built a huge, powerful “gun” in his backyard that’s capable of shooting small payloads in a suborbital trajectory. Now he’s trying to use crowdfunding to make the project a reality, which is a smart move considering the Internet generally enjoys funding ridiculously cool projects like this.

The gun, dubbed the Starfire Space Cannon, has a 45-foot barrel that will shoot small objects off the planet via a dart-shaped bullet. The ultimate goal is for the cannon to cheaply send small objects like tiny ‘cubesat’ satellites into orbit. While far less expensive than hitching a ride on SpaceX’s Grasshopper, the Starfire Space Cannon project will still cost some money.

“Rockets have been around for a long time and they work OK. The problem with a rocket is that it has to carry not just its payload but all of its fuel, the fuel tanks, and a lot of additional equipment. That makes a rocket big, and big is expensive,” Graf wrote on the cannon’s Kickstarter page. “Let’s face it, barring some breakthrough in advanced physics rockets aren’t going to get much smaller or cheaper than they are now.

“On the other hand a gun launcher can fire a vehicle that is basically a payload wrapped in an aerodynamic shell. That makes them small and small is cheap!,” he wrote.

Graf’s Kickstarter campaign is intended to fund a six shot test to ensure the cannon is functioning properly. The funds will also allow him to create a motorized rocket within the cannon’s bullet to push those objects into orbit once in space. Funding tiers range from $10 to $6,000. The most basic of those tiers let you simply support the project or shoot a random object of your choosing into space. The more expensive tiers offer you the chance to attend the cannon launch, fire the cannon, and more.

So far, the Starfire Space Cannon campaign has raised only $2,100 of its $65,000 funding goal with three weeks left. (Seriously, what is freaking wrong with you guys?!? This is your opportunity to fire potentially inappropriate or amusing items into space!) Should it reach its funding goal, the cannon testing should begin in May and run through September.

Check out the videos below for a closer look at the space cannon.

h/t to Hack a Day